Slow-Roasted Halibut with Fried Capers, Caramelized Lemon and Almonds over Chickpeas and Skordalia Top Ten Posts of 2010…And Happy Second Blogiversary to ME! 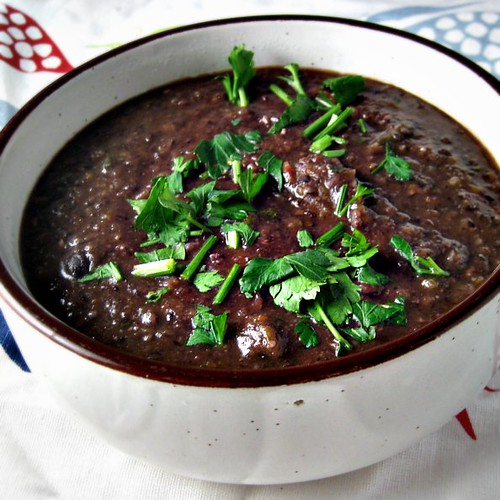 At our weekly couples therapy session (which just happened to fall on the day after Christmas.  How opportune.)  My thighs and I had something that can only be characterized as a skirmish.  (Although one might also call it a quarrel, World War III, a debate of apocalyptic proportions…)

At first, I thought it was going to be a pretty low-key session.

We used “I statements”.

We refrained from throwing things.

It was all going very well, really.  Until my thighs issued an ultimatum.

“It’s either us or the rainbow cookies,” they said, in the coldest, least emotionally involved manner possible.

So I looked down at them.  Skeptically.  Ready to scream some platitude along the lines of “it’s not me, it’s you” or “just wait, you’ll be crawling back” (oh the irony).

Then I remembered the ease and rapidity with which my calves up and bit the dust.  (And yes, we are still in physical therapy trying to work through our “issues” and a few seriously large knots.) 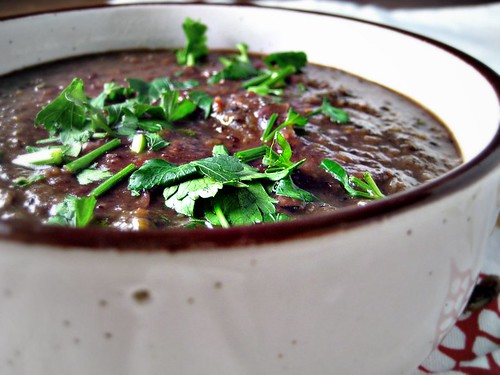 And so I caved.

I went home.  Whipped up this black bean soup, thinking it was a good healthy compromise.  But, after eating it, I think “compromise” sounds too…demeaning.  Downright delicious?  That’s more like it.

With a hint of subtle sweetness from the mango juice, a bit of spice from the cayenne, and a truly fabulous texture, this soup is one that I will glad make over and over again.  And when my roommates ask me why I’m drinking it for breakfast, lunch, and dinner.  I’ll just explain the thigh situation.  They’ll understand.

So while 2010 was the year that I got injured and sunk into a deep dark black hole in which I convinced myself that if I couldn’t run, I might as well eat brownies in monstrously large quantities (bad plan).  2011 is going to be the year in which I make myself look like a rock star again.  They say that whatever you do on the first of the year sets the stage for the 364 days that will ensue.  So join me.  Make this soup.  And let’s make 2011 a year to remember.  In the healthiest possible way. 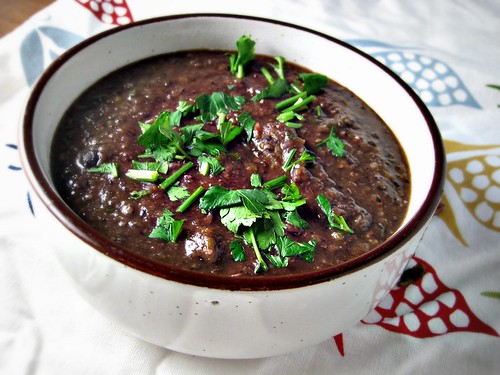 1. Drain the beans and place in a medium stockpot with water to cover by 1 inch.  Add the 1/2 tsp salt and bring to a boil.  Reduce the heat to between low and medium-low, cover, and simmer, stirring occasionally, until the beans are tender, about 1 1/2 hours (unless you have weird freaky beans like mine which cook in 30 minutes…I think it’s because I soak them for almost 24 hours).  Set aside and do not drain.

2. In a medium, deep-sided skillet with a lid, heat the oil over medium heat, add the onion, bell pepper, and carrot.  Cook, stirring, until softened, about 5 minutes.  Reduce the heat to low, add the garlic and cook, stirring occasionally, until all the veggies are tender, about 10 minutes.  Add the veggies to the stockpot containing the cooked beans and their liquid.  Add the broth, orange juice, tomato, sugar, cumin, thyme, cloves, cayenne, and black pepper as well.  Bring to a simmer over medium-high heat, stirring occasionally.

3. Remove from heat.  Using an immersion blender, blend until smooth and pureed.  (OPTIONAL – if you want a more chunkier soup, remove about 1/3 of the beans and puree in a blender, then add them back in.)  Return to the pot and stir in the cilantro, cinnamon stick, and bay leaf.  Return to a simmer over medium-high heat.  Reduce the heat and simmer, stirring occasionally, about 15 minutes.  Season with additional salt.  Stir in the vinegar.  Discard the cinnamon stick and bay leaf and serve warm.

I am submitting this to REGIONAL RECIPES: BRAZIL as well as to Souper Sundays, which is hosted by Deb of Kahakai Kitchen. 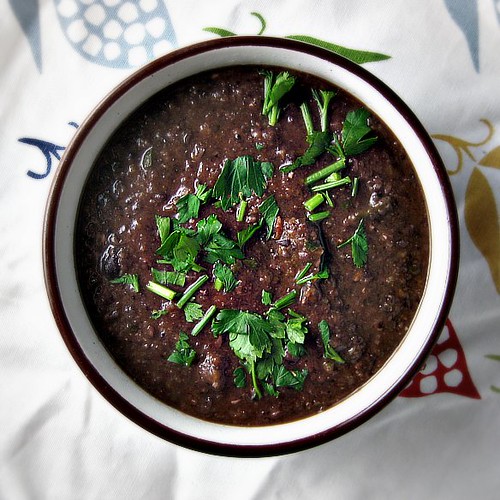