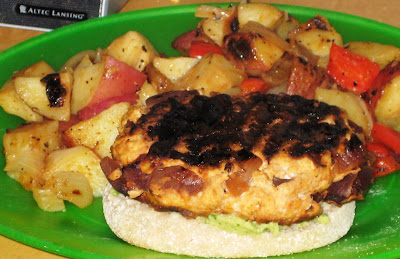 When I say “American food” to you, what is the first thing that pops into your head? For most people, this phrase evinces notions of barbecue, burgers, fries, pot roast, meatloaf, mashed potatoes, etc. In fact, a good portion of American food is based off the concept of “meat and potatoes” (think McDonalds). Not that this is a bad thing – I love me a good (turkey) burger every once in a while. So when I found out that this month’s country for Regional Recipes was America, I knew I would have to do something within these parameters. Originally, I was going to make a pot roast for the family in the slow cooker while I was home for spring break but I ran out of days before I could get around to it (that, and my father insisted that he pick out the piece of meat, which he never got to go to the store to do…they are very picky about their red meat cuts in that household – my mother can’t even pick out a steak without running it by him first). Upon arriving back at school, I set to thinking again and decided that since it had been awhile since I’d made turkey burgers, I would whip some up.

The thing that I love most about burgers is that they are so versatile. There are so many different options for flavoring and stuffing them…the options are truly endless. I was never actually exposed to one of these unconventional burgers until I started cooking myself and realized just how many variations were out there – to date I’ve made southwestern burgers, greek burgers, blue cheese burgers, turkey/lentil/moroccan burgers, and salsa verde burgers, not to mention a whole slew of bean-based veggie burgers. All of these are much more enticing than the plain old cheeseburgers my parents had us live off of every summer. The best part, though, is that with the George Foreman grill, I can eat them year round and they are NEVER dry. My one burger rule, however, is that they have to be stuffed with onions – as long as you do that, you can’t go wrong.

I have tons of burger recipes bookmarked and stowed away, but when choosing which one to make I decided to look to the self-proclaimed queen of burgers – Rachael Ray. I went with her Chicken BBQ burgers and they were nice and juicy, infused with just the right amount of bbq flavor. I really liked that the recipe called for caramelizing red onions in tomato paste before adding them to the meat mix – that added a nice flavor. To go with them, I knew I wanted a potato dish and so after hunting around, I found a recipe for Texas Home Fries on Sweetnicks that looked appealing (can you say diner food?). All in all, it was a good meal.

Add tomato paste mixture, hot sauce, and worcestershire sauce to a bowl. Mix in turkey and seasoning and combine (this is the ooey gooey get your hands dirty part). Form into 4 burgers. Heat the George Foreman grill (or an outdoor grill or fry them or bake them) and cook the burgers for 4-5 minutes each.

I served these on english muffins and with cheddar cheese.

Microwave or boil the potatoes until done. Chop into small-ish pieces. Heat a skillet and saute onion and bell pepper in butter. When they are tender, add potatoes and cook until golden brown. To speed this up, don’t stir them around. Add paprika and season to taste with salt and pepper.

I am submitting these to Regional Recipes, which is being hosted this month by TS and JS of [eatingclub] vancouver. 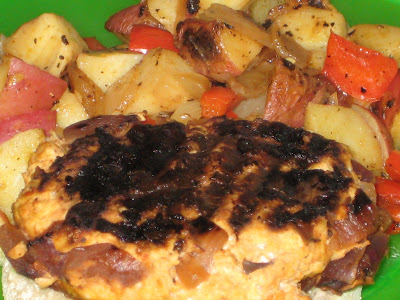