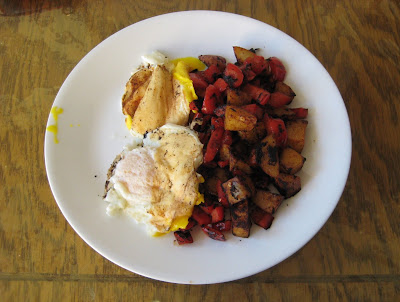 The past few days have seemed like such a blur to me. I wanted so badly to hold onto my last few moments in Boston with my friends but it all just flew by too quickly. I woke up early on Thursday, getting in my last Boston run that morning. The Charles River is one of the things I will miss most about Boston – not just the spectacular view but also the way in which most Boston runners seem to gravitate there. I became familiar with many of the faces I saw during my runs and it was nice to know that I was part of this larger running community. I used my Garmin for the first time – I love how I can see how I did at every mile and compare my speed to the specific patch of land that I was running on, etc. Playing with it makes me feel like a little kid at Christmas.

My parents got in Thursday afternoon and we relaxed for a bit in their hotel before heading off to dinner with my roommate’s family. We went to this amazing northern Italian restaurant in Waltham, MA. We shared some appetizers to start – mussels in garlic and olive oil, asparagus wrapped in prosciutto, and a parmesan mushroom souffle. The souffle was so creamy and delicious – it is what the restaurant is famous for. Then for a main course I ordered grilled swordfish with caponata and a scotch malt whiskey sauce. Also VERY good. Finally, for dessert I got the hazelnut creme brulee. I have been on this creme brulee kick since the cruise. I need to convince my parents to buy me a blowtorch.

Friday was graduation! The ceremony itself was quite long and boring. Our guest speaker was the governor of Massachusetts – Deval Patrick – and his speech was very good. It was filled with personal anecdotes, which I really enjoyed. The two hours of names that followed his speech though – not so much fun. Mine was all the way at the end so I had to stay awake. Boo! After the ceremony, my mom took about fifty or so pictures of me. The rest of the afternoon/evening was filled was massive amounts of food. We moved from the biology lunch reception, to a cocktail party my roommate’s parents through for all of her friends, to dinner at this wonderful restaurant in Boston’s North End – Prezza. I ate my weight in brie. No really. The biology reception had this brie covered in almonds and honey and the cocktail party had brie with cranberry sauce. I was on cloud nine.

Saying good-bye this morning was not so much fun. First of all, it was preceded by having to pack up the car and there is NOTHING that I hate more than packing. Then, I had to say goodbye to my best friend in the entire world. Tiffany and I have been roommates for three years. We have never had a single fight. That girl has been there for me through everything and has supported me even when I didn’t think I could support myself. She has always had faith in me and without her I do not think I could have gotten through the past four years. We never fail to laugh when we are around each other and I just can’t imagine going the rest of my life without waking up to her ever morning. I told her today that having to leave her was worse than any break-up I have ever encountered and I truly believe that, I really feel heartbroken.

I don’t mean to bring everyone down. It has just been a very emotional day and I just still can’t believe that it’s really over. MIT and Boston have become my homes – they are some of the most special places I have ever encountered and I will miss them dearly. But I have to try to be optimistic and do my best not to wallow in sadness. It will just take some time to adjust, so bear with me.

In my mind, I had had this whole menu planned out for tonight but then we hit traffic on the way home and that was the end of that. After unloading the car, however, I was ravenous. The past few days have been so filled with food (the masses of brie, this banana chocolate chip peanut butter bread pudding with peanut butter ice cream and peanut butter sauce that I had for dessert last night…hey you only graduate from MIT once – I deserved my 5,000000 calorie dessert!) that I knew I didn’t want to go the easy route and order in some take-out. Instead, I opened up my parents fridge and assessed their supplies. First, I looked at the veggie options – peppers, potatoes, string beans, and mushrooms. Then, I checked out their protein sources. Nothing much except for eggs.

Suddenly, I had an epiphany. Since breakfast is inarguably the most important meal of the day and is key to maintaining a healthy lifestyle, then couldn’t I make up for all of the “bad” food I’ve been eating by having breakfast twice in one day?!?!? It seemed like a pretty foolproof plan and tastewise, at least, it was. If you are ever in need of a super quick clean-out-the-fridge type meal, this is it.

Heat a nonstick pan and spray it with cooking spray. Add the potatoes and cook for five minutes. Sprinkle with salt and spices to taste. Add in the pepper and bbq sauce. Cook until potatoes are soft and cooked through. Remove from heat.

In the same pan, crack the two eggs. After about a minute, flip them. Remove from heat after 30 seconds. 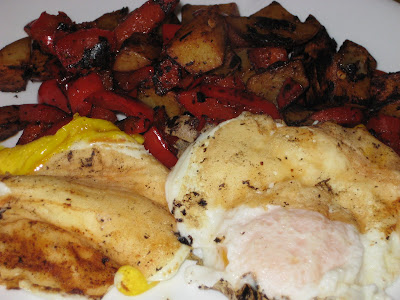