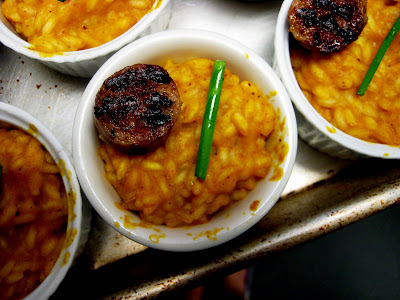 You are going to get very sleepy. 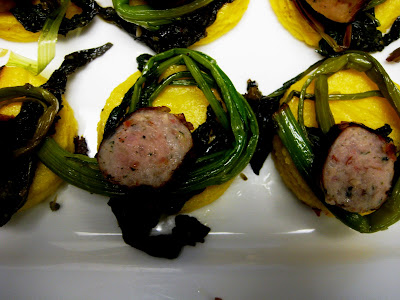 Now. Hand over your wallet.

Hmmm. That’s not quite it either. 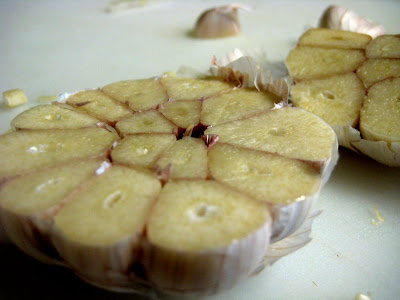 Hold out your hand.

I am going to reach into my Bag O’ Esoteric Meats here. I am going to hand you something. Rabbit, pheasant, quail, elk, boar, buffalo. No telling what it might be.

And then you are going to rush over to your corner of the kitchen. Unwrap whatever it is that I handed you. And cook a dish for 13 people.

Chicken? Of course there’s no chicken. What do you think this is, a Walgreens? We run a high end establishment over here. If you want chicken, you can go to your local Olive Garden, order the chicken parm and never come back. Seriously. Whoever is afraid to expand their culinary horizons. Leave. Now. 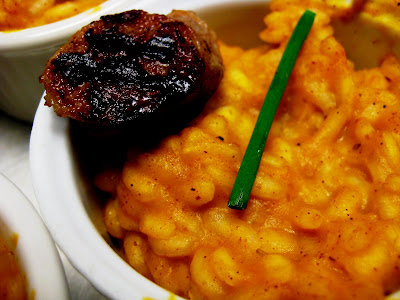 Alright good. I think we got rid of the weaklings. Can you believe that? Chicken, she mutters, shaking her head.

Here’s the point where you either start to back away. Slowly. Or say, Ok. What the hell is going on.

Let’s go with the latter.

You see. I know Christo.

Marx Foods said to Christo. Let’s make a deal. You gather some of NYC’s best bloggers. In a kitchen. In Manhattan. And we will send you meat. And dried mushrooms. And dried chiles. And vanilla beans. And flavored sugar. And then you guys will cook it. And eat it. The end.

Christos and I chatted about it beforehand and felt that the best way for us to use all of the ingredients in as varied and interesting a way as possible would be if we made the dishes tapas-style so that everyone could get a small taste of everything.

I was in charge of the sausage (rabbit, pheasant, and lamb merguez). Kian took the quail, osso bucco, oysters, and veal ribs. Christy attacked the lamb ribs and pork chop. And Christo worked his magic on the kobe sirloin, kobe burgers, boar ribs, and boar tenderloin.

Yes. We had enough food to feed a small army. In fact. I like to think of us as a kind of military unit. Fighting the good fight against boring food. 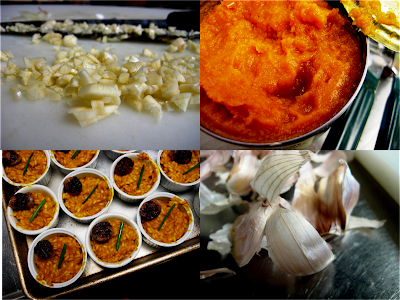 With the pheasant sausage, I made a pumpkin risotto with nutmeg, cinnamon, roasted garlic and mascarpone. First, I cut a head of garlic in half. Wrapped each half in aluminum foil and roasted them at 400 for 45 minutes. Then I scooped out the cloves and mashed them together.

I heated some olive oil in a saute pan over medium heat and sauteed a box of arborio rice for about 2 minutes. In the meanwhile, I set a box and a half of chicken broth (about 6 cups) to simmer on the stove. Little by little, I added the chicken broth to the arborio rice, constantly stirring, only adding more when the last bit had just evaporated. When the rice was tender, I mixed in a can of pumpkin along with the roasted garlic, about 3 tbsp of mascarpone, and salt, nutmeg, and cinnamon to taste. I spooned this into ramekins, which I then placed in a 250 degree oven to keep warm.

Grilled the sausage, sliced, and plated as shown above. Done. Christo had prepped the polenta for me before I got there (he mixed it with some of the fabulous dried mushrooms that Marx Foods had sent us along with a mix of cheeses, cooked it, spread it out onto a baking sheet, and popped it in the fridge so it would semi-solidify.)

Now as an Italian, there was no way that I was going to cook a variety of sausage dishes without including broccoli rabe in there somewhere. (Especially since pasta with sausage and broccoli rabe is possibly the only dish that my mother made that I still dream about. Incessantly. I might need a cold shower.)

So what I did was, thoroughly washed a bunch of broccoli rabe. Sauteed it in some garlic (6 cloves), olive oil, and red pepper flakes. Salt and peppered to taste.

Cut the polenta into rounds using a cookie cutter. Heated in a 350 degree oven until warm. Topped each polenta round with a piece of broccoli rabe, and a slice of sausage. Eat. 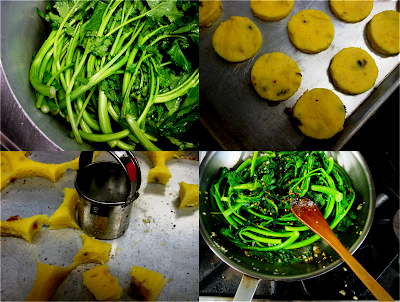 Last up. Homemade pasta with cinnamon-scented tomato sauce. I made the cinnamon sauce posted here. Except instead of keftedes, I removed the lamb sausage from it’s casing and sauteed it, adding it to the sauce as it was simmering.

Then, Christos helped me to mix up my first batch of homemade pasta dough! We combined a pound of semolina dough with five eggs and a bit of water until it felt right. (Christo said it felt right. To me. It just felt like sticky dough.) Ran it through a pasta roller until it was thin enough. Then ran it through the fettuccine cutter of the pasta roller. Boiled for about a minute. Topped with sauce. Again. Ate. 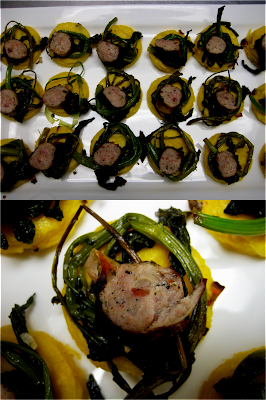 All in all, I would say the evening was a definite success.

I learned a lot (how to make pasta, that I probably like cinnamon way more than the average person, that I should definitely plan more when cooking for a large crowd instead of just trying to roll with it). Had some really good, thought-provoking conversation (about food. And blogging. And more food. Sorry friends. Bloggers tend to have one-track minds.) Got to eat some new foods. And all in all just had a. Good. Time.

So thanks to Christo for organizing this and getting me involved, Christy and Kian for showing up and cooking, and Justin at Marx Foods for sending us the goods. Hope we can do it again sometime! Be sure to check out the other blogs in the next few days to see what they cooked. 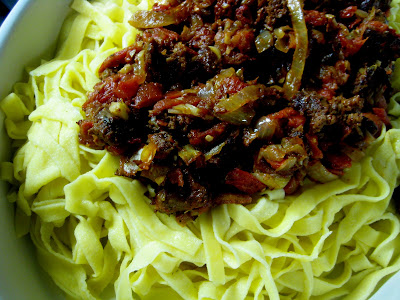