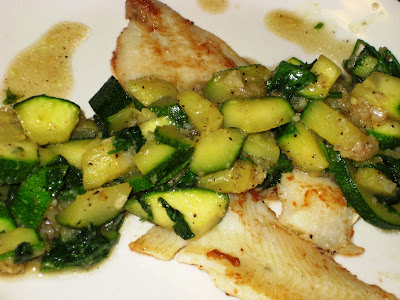 I finally got some sleep last night. I forced myself to go to bed early because I knew I had to get up at 6AM for my long run with TNT at 7. I really like doing the runs because each time I go, I meet a new person and inevitably end up having some good conversation. As a result, the ten miles just flew by!

I had my first full day in lab yesterday and worked from 10-5. I haven’t been in a lab for a year now and so when I first got in, I kind of stared at the pipettes and eppendorf tubes for a while, trying to remember exactly what it was I was supposed to do with them. After about twenty minutes they started to look less like alien torture devices and more like remnants from my past. Not that the two are mutually exclusive.

I was very excited when I saw that the theme for this month’s Monthly Mingle hosted by Jenny of All Things Edible was a Mexican Fiesta. I mean, who doesn’t LOVE Mexican food. I kind of wanted to avoid the usual taco/enchilada/tostada/etc. dishes, though, just because I can make those any old day. So I decided to turn to Rick Bayless’s Mexican Everyday. I took it out from my local library and bookmarked almost every recipe in it. Moral of the story: I am a glutton. So basically, I did what any sane person would do. I closed my eyes and opened up the book to a random page, vowing to make whatever recipe appeared before my eyes. Lo and behold, it was his Seared Snapper with Zucchini and Toasty Garlic Mojo. Snapper was really expensive, though, so I went with flounder. It was amazing. Like really good. He has you pan-roast the garlic until it is creamy and heavenly and then he has you make a sauce out of it and then you eat it and love it. It was a fiesta in my mouth. 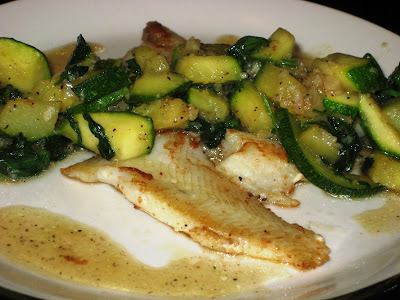 1/2 lb flounder fillets
2 1/2 tbsp olive oil
8 cloves garlic, peeled and halved (okay so I halved the recipe but kept the garlic the same. There is no such thing as too much garlic.)
1/3 cup broth
1 large zucchini
1/2 cup cilantro

1. Turn on the oven to it’s lowest setting. Warm the olive oil in a large skillet. Add the garlic and cook until soft and lightly browned on all sides, around 4 minutes. Scoop the garlic into a food processor, leaving as much oil behind as possible.

2. Add the broth to the blender along with 1/2 tsp salt and 1/2 tsp black pepper. Blend until smooth.

3. Return the skillet to medium-high heat. Season the fish with salt and pepper. Lay the fish in the pan. When it is brown underneath, flip it over with a spatula. Cook it until the fish gives slightly under pressure, about 2 minutes. Transfer it to an oven-proof pan and put in the oven to keep warm.

4. Add the zucchini (diced) to the skillet and saute until just beginning to soften and slightly browned, about 6 minutes. Add the garlic mixture and cilantro. Stir in the sauce until it comes to a boil and is homogeneous. Taste and season.

5. Put a fish fillet into each plate and pour the zucchini and sauce around it. 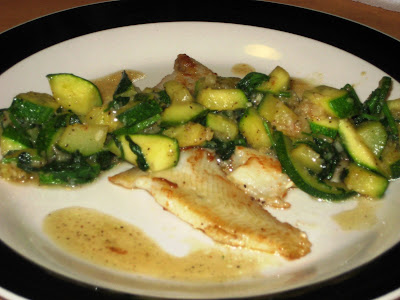