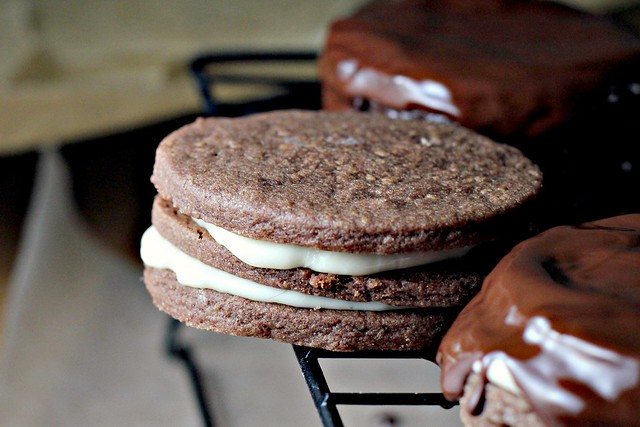 For a girl who drinks sparingly at best…

Bailey’s, Guinness, and whiskey.  All wrapped up in one marshmallow-filled, chocolate-covered TRIPLE.DECKER. cookie sandwich.

Suffice it to say, these are not for the faint of heart.

Or the recovering AA member.

Or any child under 21 years of age.  (18, if you’re my mother who still believes that that is the legal drinking age. I’m neglecting to tell her otherwise.  For my sister’s sake.) 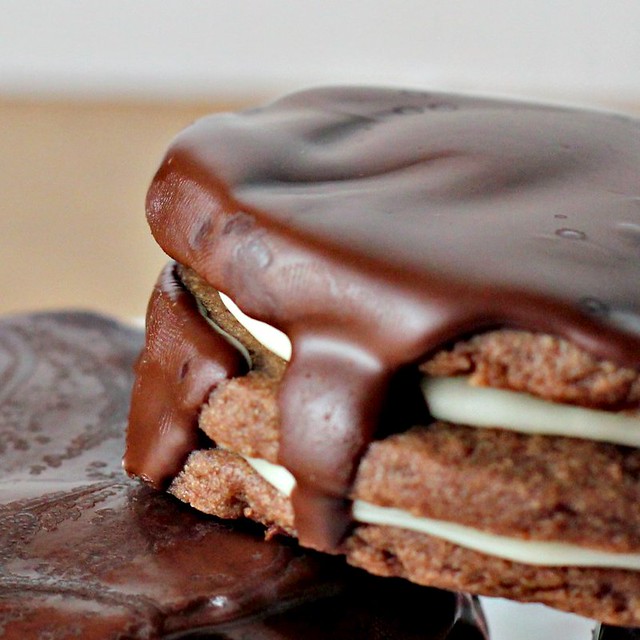 But a group full of scientists at 10AM on a lazy Wednesday morning who are supposed to be discussing the metabolic state of cancer cell microenvironments and showing graph upon graph full of negative and completely meaningless results (ummm that last part was just me)?

I’m fairly certain this holds true for just about any work meeting environment…so go forth and bake…and then force what you’ve baked upon your unsuspecting coworkers.  And if you happen to neglect to mention just how much alcohol was in these babies until everyone is back at their lab benches and too tipsy to hold a pipette… 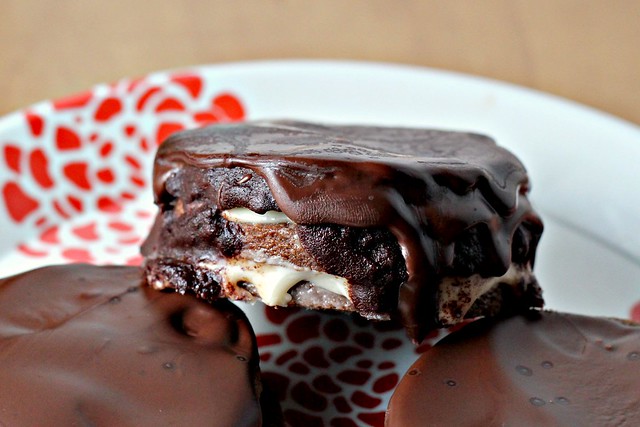 Okay, but the real deal with these is that if you are anyone other than a constantly-slightly-dehydrated 25 year old female…these will like not have any effect on you other than the placebo type.  Which is to say that all this sugar and chocolatey deliciousness will rush to your head and make you very.very.happy.

Which isn’t such a bad deal either. 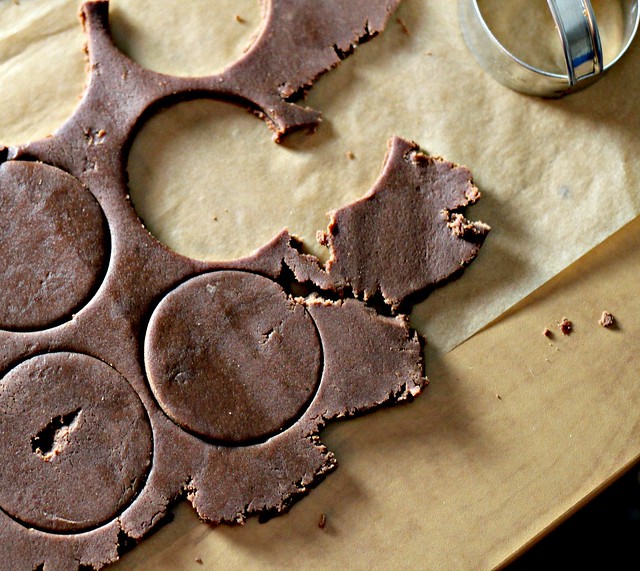 They’re also perfect for those of us who are absolutely prohibited from drinking on St. Patrick’s day this year…due to the whole running-13.1-miles-at-7:30-in-the-morning-the-next-day half marathon thing.

(Not that we were really going to anyway…but at least now we have a less lame excuse than “I don’t wanna!”) 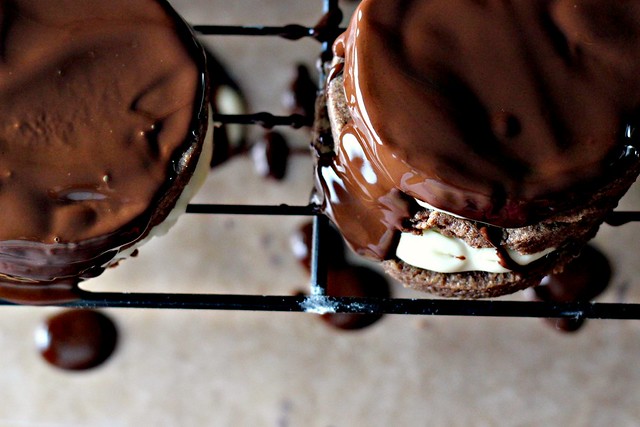 To be totally honest with you, these are seriously time consuming but in a totally worth your while kind of way.  The chocolate guinness cookies are the easiest roll-out cookies I’ve ever worked with.  I rolled them out on parchment paper and didn’t have to flour either the table or my rolling pin.  That kind of easy.

The marshmallow creme frosting requires boiling sugar and a candy thermometer…but don’t be scared.  Once you get over the fear of pouring 230 degree sugar all over your limbs, it’s really smooth sailing.  Wear a rubber body suit if you’re really concerned…maybe the one from Britney’s “Oops! I Did It Again” video.  It’s a classic.

And once you get through all that…the chocolate glaze is a piece of cake.  Err moon pie.  Same difference.

For the Bailey’s Marshmallow Creme:

For the Whiskey Chocolate Glaze:

For the marshmallow creme:

I am submitting this to the March Sweet Adventures Layer Upon Layer blog hop! 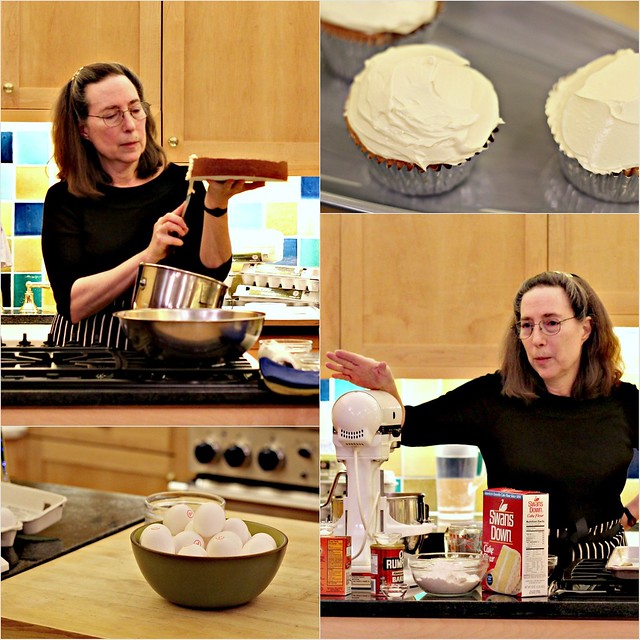 Speaking of eggs, can we talk about eating them raw for a second?  And no, I’m not talking Gaston from Beauty and the Beast style consumption, but rather…the ingestion of tempered eggs.  Eggs that you think you’ve scrubbed of all their salmonella by bringing them into contact with warm liquids.  Eggs prepared such as those in ice cream or mousse or swiss meringue buttercream or…this marshmallow creme frosting.  Well…we were wrong about them.  As it turns out, they’re not as safe to eat as we’ve always believed.  And while it will probably be okay for those of us with totally efficient immune systems to ingest them, the same is not true for the immunodeficient – those on chemo, small children, and pregnant women, to name a few.

Thankfully, as I learned at an amazing event hosted by Rose Levy Beranbaum a few weeks ago…there is now a solution – Safe Eggs.  These eggs are pasteurized, making them totally safe to eat raw.  Not only that, but they behave exactly the same as non-pasteurized eggs in baking and cooking (and even make for more stable meringues, according to Rose!).  I used them in this marshmallow creme frosting with great results.  And it definitely helped me sleep at night knowing that there was not a single chance that anyone was going to get a bacterial infection from ingesting them.  Score.  I’ll definitely be using them in the future for all my raw egg needs!

Thanks so much to Safe Eggs for inviting me to attend the event and to Rose for being so amazing! She was full of the most insane baking tips and was one of the nicest people I’ve ever met, staying afterwards to talk shop with my friend Lauren and me long after the event had ended.  And did I mention that she baked us a cake?  Key.to.my.heart.  (It was good.  Seriously so.) 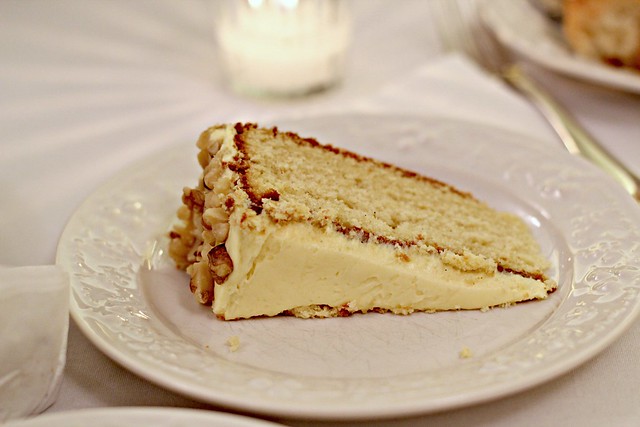