Sandwich of the Week#2 and A Book Review 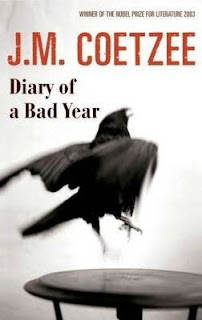 I have been having a pretty busy week between tutoring, baby-sitting, and The Mystery of Edwin Drood (a musical that I’m playing the piano for). The show opens tonight and we have had rehearsal every night for four hours for the past week. It’s looking like all of the work will have paid off, though, so if you’re in the Boston area either this weekend or next, feel free to come check it out. We’re performing it on the MIT campus with the Musical Theatre Guild and you can go to web.mit.edu/mtg for details! There tends to be some downtime at rehearsals, however, and so I have been reading up a storm.
Diary of A Bad Year by J.M. Coetzee is the first book I have finished from the NYTimes Notable Book List of 2008! I have read another work by Coetzee before – Slow Man – which I liked and so was expecting good things from this work as well. This novel is interesting in the way that it is not exactly a standard fictional work with a beginning, middle, and end. There is no real outright plot, and yet even as I’m writing that, I know that it’s not entirely true. The novel is about a South African writer living in Australia, Senor C, as he is called by one of the two other characters, who is contributing to a book which is to be published in German that consists only of “strong opinions”. Each page in the book is broken up into three segments, each of which follows a different storyline. The first section is the strong opinions themselves. The second is told from the point of view of Senor C who tells of his interactions with his much younger upstairs neighbor, Anya, a woman with whom he is entirely infatuated. He hires Anya to type up his strong opinions as he dictates them to her, and finds that as he gets older he is more and more contented with the idea of sex and romance with the actual carrying out of them. The third storyline tells of Anya’s interactions with her boyfriend, Alan, with whom she discusses Senor C’s strong opinions. I really like the way in which this book blurs the lines between fiction and non-fiction. In his strong opinions, Senor C discusses a wide range of topics that are relevant to today’s world, such as terrorism, music, and even the authority of the author. In doing so, one can’t help but wonder how close they lie to Coetzee’s own feelings about the state of the world, and as such can’t help but feel that they are thought-provoking. In all, it was a good read and I would highly recommend it. 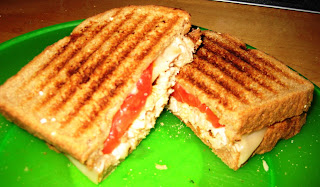 And NOW, ladies and gentlemen, the moment you’ve all been waiting for…the sandwich of the week! Except I feel like I’ve build it up so much, that you won’t be able to help but be disappointed. Oh well. Looking at this picture makes me realize how much I need to get more attractive dishes. The green just doesn’t seem to make any of my food look that appealing.
Tuna Pesto Sandwich with Provolone and Tomatoes
2 slices of whole wheat bread (still on a Trader Joe’s bread kick)
1 can tuna (about 4 oz)
1 tbsp Classico sun-dried tomato pesto
1 small roma tomato
1 slice provolone
1) Construct your sandwich. Grill/panini press it until the cheese melts.
2) Eat!!
You are reading this post on Eats Well With Others at https://joanne-eatswellwithothers.com. Excerpts and links may be used, provided that full and clear credit is given to the author and or owner of Eats Well With Others. All rights reserved by Joanne Bruno.