Curry Pumpkin Hummus We Are Going To Play A Game… 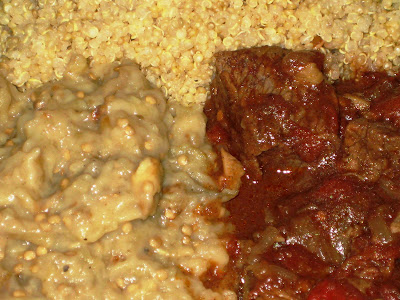 I’ve never actually had a Turkish Delight but the term always reminds me of The Lion, The Witch, and The Wardrobe by C.S. Lewis. You know the part where the witch lures Edmund into her carriage by offering him tons upon tons of Turkish delights? Really, someone should have told him never to accept candy from strangers. Things would have turned out a lot better that way.

I had Turkish food for the first time a few weeks ago, when my roommate and I went to a restaurant in Brookline. There were SO many items that I wanted to try, but alas I could only choose one, so I came away from the menu promising myself that I would try to cook some of the dishes on my own time. I was so pleasantly surprised then, when the theme for this month’s Regional Recipes turned out to be Turkey. This was just the impetus I needed to force me to follow up on my resolution.

One of the things that I love about Middle Eastern cuisines/restaurants is the variety that they tend to give you on one plate. There is usually a stew-like meat, some kind of vegetable, and a grain. I also really like the ingredients they use, such as lamb, eggplant, peppers, onions, garlic, lentils, beans, pistachios, pine nuts, and olive oil. Perhaps this array of balanced ingredients is why the Mediterranean diet proves to be so effective for so many people!

A dish that especially caught my eye when perusing the Turkish restaurant’s menu was one called Sultan’s Delight or hunkar begendi. It traditionally consists of a lamb stew served on a bed of creamy roasted eggplant puree, although the meat can also be replaced with beef, chicken, or veal. Just the phrase “creamy roasted eggplant” was enough to convince me that this was the dish I had to make. I found a recipe for this in the cookbook Arabesque by Claudia Roden, a book that describes the delicacies of Morocco, Turkey, and Lebanon. I modified it slightly, choosing to use beef instead of lamb (because of expense reasons – the only lamb I could find was $13 a pound…I thought that was slightly insane), but otherwise stuck pretty much to the recipe.

The verdict: it was everything I hoped it could be. The stew reminded me of dishes I’ve gotten at Middle Eastern restaurants in the past and the eggplant puree tasted kind of like mashed potatoes….but way better! Served with some quinoa to soak up the juices, this was a really good meal. 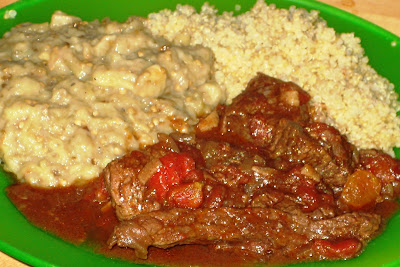 2. Get the stew going. Heat the olive oil and then cook the onion (chopped) until soft and browned. Add the beef, season with salt and pepper, and brown. Add the garlic, allspice, cinnamon, and cayenne pepper and cook for 2 minutes so flavors can incorporate. Add the tomatoes. Bring to a boil and then simmer. Cook, covered for 45 minutes. Remove the lid and simmer for 30 minutes or until stew reaches desired consistency and beef is tender. Taste for seasoning.

3. While the stew is cooking, make the eggplant sauce. Cut the eggplants in half lengthwise and place cut side down on a greased baking sheet. Roast for 30 minutes. Set aside to cool. Scoop the flesh out of the eggplant and, in a fine strainer, squeeze out the liquid from it. Chop the eggplant and mash it with a fork until it becomes almost paste-like.

4. Heat the milk that you will be using. In a medium saucepan, melt the butter over low heat. Add the flour, whisking until smooth, for two minutes. Remove from the heat and stir in the warm milk, slowly. Season with salt and pepper and return to heat. Whisk continuously until sauce thickens, about 10-15 minutes.

5. Add the eggplant to the bechamel sauce, stirring until it is completely incorporated. Taste for seasoning and keep warm until everything else is ready.

6. Cook some quinoa, brown rice, bulgur, barley, or any grain you so desire to go along with this!

I am submitting this to Regional Recipes, which is being hosted this month by dp of Blazing Hot Wok. 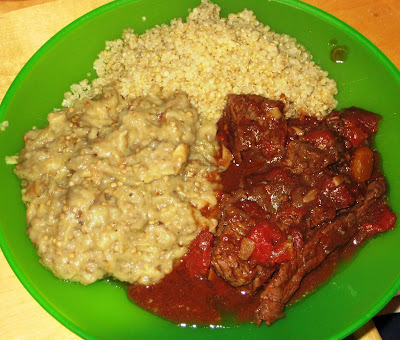