Banana Muffins with A Streusel Surprise 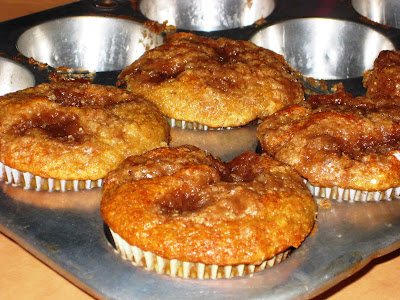 I have to be honest about something. I am very picky about my bananas. I like them green. Or that yellow that is still tinged with green. Basically as unripe as possible while still being edible. If there’s even a hint of brown, I want nothing to do with them. There’s just something about that tart sweetness that appeals to me so much more than the soft, mushy dull sweetness that the majority of people really seem to like. What this means, of course, is that after one day of sitting on my counter, bananas are absolutely useless to me.

So why, then, did I buy 4 bananas from a guy who was selling them on the street, knowing that I would only deem them inedible within 24 hours? It had something to do with the fact that they were 4 for $1.00 but 35 cents each if I bought less than four. And then there was also my subconscious. Which told me that if I bought 4, I would have 3 that I could let ripen. And what are ripe bananas good for if not muffins and bread and all sorts of delicacies?

So I borrowed this muffin recipe from Annie’s Eats. It was originally supposed to be a banana crumb muffins – i.e. a banana muffin with a crumb topping. My crumbs didn’t quite solidify, however, and thus mine because banana muffins with a streusel topping. Not such a bad thing because the warm streusel kind of sunk into the muffins, allowing you to get surprising bites of cinnamon brown sugar every once in a while. Completely delicious and definitely worth trying. 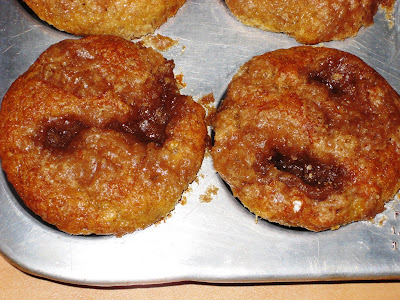 1. Preheat oven to 375. Line a muffin tin with paper liners or grease it. I find that greasing it never really works the way it should. Stick with the muffin liners.

2. In a large bowl, mix together the flour, baking soda, baking powder, and salt. In a separate bowl, beat together the white sugar, egg, applesauce, bananas, and cinnamon. Mix the wet into the dry, stirring until just incorporated. Distribute among the muffin liners.

3. In a small bowl, mix together the brown sugar, flour, and cinnamon. Cut in 1 tbsp butter until the mixture resembles cornmeal (this never happened for me – I think my butter just melted too fast). Distribute among the tops of the muffins.

4. Bake for 18-20 minutes (mine took 20 minutes) or until a toothpick inserted comes out clean. 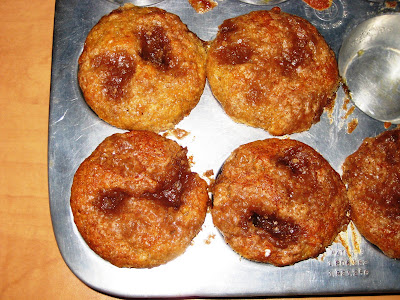 15 Responses to Banana Muffins with A Streusel Surprise