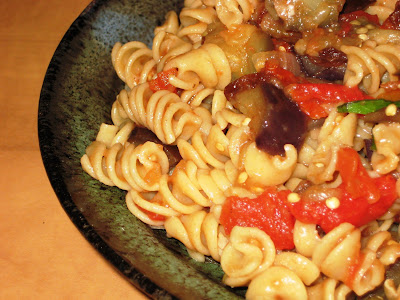 Welcome from lab! The only place on this campus where I am guaranteed to get internet. I kid you not, my internet in my room has still not been connected. We are on the case though. My roommate and I went by the ITS office this morning in an attempt to stage a mutiny. We even got the head of the MD/PhD program involved so hopefully it will be taken care of soon. In the meantime, I am currently waiting for my samples to be centrifuged so that I can extract the RNA from them. Sounds like fun, huh?

Speaking of fun, I had a pretty good weekend. After my ten mile run on Saturday, one of my new friends and I hit up Trader Joe’s. It was PACKED. There is only one in all of Manhattan, although there are apparently rumors that a new one may be built on the upper east side. Seeing as how I will be here for the next eight years, I am strongly in favor of that idea! On Saturday night, a few of us headed out to Punk Fair which is a bar a bit south of Houston Street. The drinks were somewhat rationally priced and the noise level was manageable (I feel so old complaining about the noise but it’s more that I like actually being able to hold a conversation with the person sitting next to me). After some drinks, we headed to a club called One In One and danced the night away until 3:30AM. I discovered that one of the girlfriend of one of my new classmates is starting culinary school this year and even used to intern for Rachael Ray. How awesome is that! I can’t wait to talk food with her more.

On Sunday I went home to see my parents. And to do laundry. I still haven’t really decided which took precedent over the other. My mom keeps complaining about being overweight (she weighs only about fifteen pounds more than me so I’m not quite sure what she’s talking about), I think because she has a wedding to attend on Friday and isn’t that happy with the way her dress fits. It’s also bathing suit season which really never makes anyone feel that great about themselves. Apparently she did one of those exercise videos on Exercise On Demand and so she said to me, “I think I did something wrong. My whole body is sore.” To which I responded, “Actually, I think that means that you did something right.” She wasn’t too happy about that answer. All in all, it was a pretty nice visit. As it turns out, spending about five hours with my parents is quite optimal!

When I first got the Bon Appetit Fast/Easy/Fresh cookbook and was paging through it, this recipe caught my eye. Mainly because of the word “eggplant” in the title. I love eggplant and only recently discovered that there are so many people who are allergic to it! Apparently it makes their tongues feel fuzzy. Kiwi has that effect on me. Weird. Anyway, I made the recipe basically as is, although I scaled down the pine nuts and capers as well as switched out the currants for raisins. I couldn’t find dried currants in the store and from what I could tell they aren’t that dissimilar from raisins. The saltiness of the capers was balanced really well by the sweetness of the raisins. The dish contained so many different flavors that each bite seemed like I was tasting the dish for the first time. Definitely a keeper recipe. 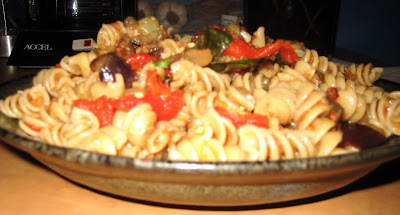 2. Start to boil the water for the pasta. Heat olive oil in a large, heavy skillet. Saute the onion until lightly brown, about 4 minutes. Add in the garlic and saute until fragrant. Add the eggplant and saute until tender, about 10 minutes. Stir in the pine nuts, raisins, and capers. Saute 1 minute. Add in the tomatoes and cook until heated through. Season to taste.

I am submitting this to Presto Pasta Nights, which is being hosted by ME! Remember to send me your entries before Thursday evening at [email protected] 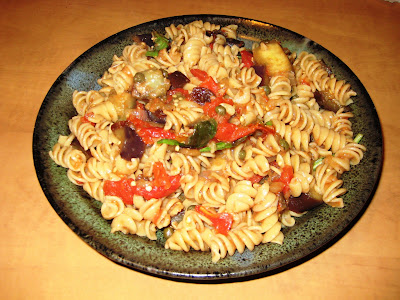 11 Responses to Fusilli with Eggplant, Pine Nuts, Capers, and Raisins