Pasta with Lentils and Artichokes 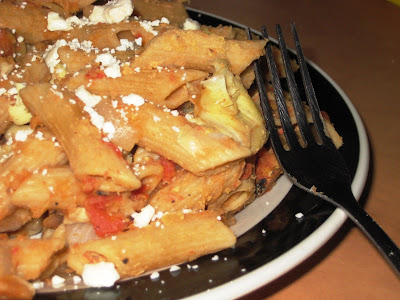 Even with this whole 8 years of school/selling your soul and first born child to the institute thing, entering into an MD/PhD program has its perks. For example, how often do you get to say things like, “Yesterday, I had lunch with a Nobel Prize winner”? You see, in addition to working in the lab this summer, all of the first and second year MD/PhDs have lunch seminars with faculty two times a week where the 26 of us sit around and pick the brains of various researchers, all over free food. Yesterday it was Paul Nurse, who won the Nobel Prize for his discovery of the genes that regulate the cell cycle (i.e. they tell cells when to divide, a process that goes awry in most cancers). And to be honest, he is one of the most down-to-earth guys I have ever met. Even more so than some of the more arrogant professors I’ve met who will never even come close to winning a Nobel Prize. I think all of us kind-of fell in love with him a little. Or maybe I’m just projecting.

One of the downsides of entering into an MD/PhD program: having to get pricked three times in one day – I feel like a heroin addict! Apparently I had to have serum titers taken to make sure I am actually immune to the things I have been vaccinated for, get a Tetanus/Pertussis booster (and those things HURT for days afterward), as well as a tuberculosis test. That would be my second tuberculosis test in two months. Because those things are so much fun that one is just not enough. The woman somehow managed to bruise me with the Tb test, which I have never experienced before. I have no black and blue from where she drew blood but I most certainly have one from the subcutaneous injection. I don’t have Tb, though. In case anyone thought otherwise.

So last night I had my usual TNT practice. We did a Fartlek training practice which is basically an exercise in interval training that will ostensibly make us faster in the end. We did about 6.6 miles in total. The first 1.7 was warm-up, the next was supposed to be anaerobic meaning that we run at about 85%, then we recover for a half mile, do another mile at 85%, recover again, and finish the loop at lightening speed. Or what feels like lightening speed after running over 4.5 miles. Keep in mind we did all of this in the rain. So when I got home, wet and muddy, I was really glad to be able to pop this leftover pasta into the microwave and have a warm and delicious dinner within minutes.

I first saw this pasta on the blog A Year In The Kitchen, which has a ridiculous amount of good food. Ashlee is amazing, you should check it out. The recipe is originally from a Moosewood cookbook and is filled with tons of flavor. The red lentils that are called for kind of become this mush that kind of gives the pasta the impression that its covered in ricotta. The only thing I changed was that I accidentally bought a can of tomatoes with green chiles instead of regular fire roasted tomatoes and so I left out the extra red pepper flakes since it was so spicy. A mistake I would definitely make again. It was also a good reminder as to why I love feta so much. Sometimes I forget. And then I taste it again. 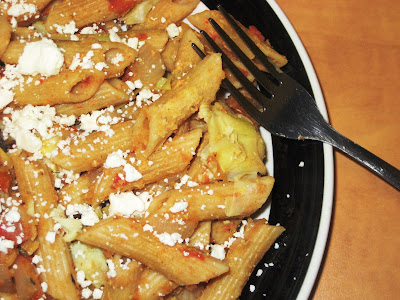 Pasta with Lentils and Artichokes
Serves 4, adapted from Moosewood Low-Fat Favorites by way of A Year In The Kitchen

1. Combine the water, lentils, and bay leaf. Bring to a boil and then simmer, covered for 15-20 minutes or until done.

2. Boil water for pasta, add salt, and then cook pasta.

3. Heat a large saucepan. Add some olive oil then saute the onions until golden, about 5 minutes. Add the garlic, cumin, and coriander and stir to mix. Add the lemon juice, tomatoes, artichoke hearts, and crushed red pepper and simmer for 10 minutes.

4. Season with salt and pepper to taste, then mix with pasta and lentils. Serve sprinkled with feta cheese.

I am submitting this to Presto Pasta Nights, which is being hosted by the lovely Pam of Sidewalk Shoes. 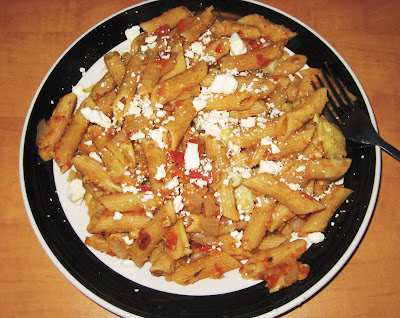 17 Responses to Pasta with Lentils and Artichokes