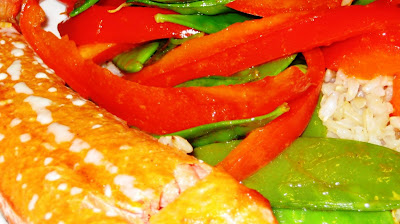 The movie Julie And Julia, though I haven’t seen it, has got me thinking about challenges, specifically those that involve food and cooking and the blog. If I had more time, I would love to do something like take a master chef and cook through all of their recipes. The thing about that, though, is that it would be structured and there would be no leeway in the process (but maybe that is part of what I like about it?). Surely, I would get tired of eating one person’s cuisine for an entire year! Especially if their food was so centered around one genre, as Julia Child’s was. Midway through the challenge, I would definitely be craving things like pasta and coconut milk; it just wouldn’t work out.

This week, one of my friends invited me to go with him and some friends to Crash Mansion, a bar/club in the Bowery, where all sorts of world records that revolve around food were going to be set. Now that the Guinness Book of World Records is going to be published almost solely on-line (what isn’t these days?) many places around the country are having these events where you can create and set your own world record. The real hook, line, and sinker of the deal – what truly reeled me in – was the record that we were going to set – most PB+J sandwiches made in one minute. I have a feeling I stopped listening at the phrase “peanut butter”, and so needless to say I accepted the invitation hands-down, no questions asked.

There were seven of us who met on Wednesday night at a bar close to the place where the event was being held for some serious strategizing. The plan was simple. We were going to do this assembly line-style (a strategy that’s worked so well for Ford in the past hundred years can’t be wrong) – one bread distributor, two peanut butterers, one jelly-er (that was me!), one bread smusher, and two crust cutters. After a few practice runs, a peanut butter-covered table, and some shots of liquid courage (a.k.a free rum from the open bar) we headed down, ready to make our names in the peanut butter world.

Things were just getting started when we walked in, so we settled down to watch the world’s largest fruit kabob, the world’s largest smore, and the fastest girl to ever say the alphabet backwards with an egg on her head and a spoon on her nose records being set.

Then, it was our turn. The moment of truth having finally arrived we all got into position (kneeled) around some very short tables. That was when mass chaos ensued. Truth-be-told no amount of practice could have prepared us for the frenetic energy that overtook us – mind, body, and soul. Although I can only speak for myself, I jellied like I had never jellied before. Maybe I couldn’t do something as laborious or noteworthy as cooking through Julia Child’s Mastering the Art of French Cooking, I thought, but there was no way I was going to fail at something so near and dear to my heart as making peanut butter and jelly sandwiches. So I got into this zone where all I could see was the bread in front of me and the jelly container in my hand.

And it was glorious. When time was called, we arose from our delirium in a daze, some of us with peanut butter all over our pants (Andrew) and others of us shaking from the adrenaline of it all. After the the wreckage was cleared away and the stray peanut butter licked from the table (and some crusts eaten), the definitive tally was declared to be 14 sandwiches. A respectable number. Something that we could be proud of.

We walked out of that room with our new World Record Holder badges attached to our shirts and spent the rest of the night rehashing the tale of our success and patting ourselves on the back over mojitos and rice pudding. We were heroes, at least in our own minds. And even though I might not get a blockbuster movie out of it, I have at least made a small dent in the world of culinary feats.

What does this have to do with salmon, you might ask? Very little. Except that the recipe comes from Bon Appetit’s Fast/Easy/Fresh, which I decided to cook my way through a long time ago, albeit at a very slow pace and with no time limit. Perhaps that will someday garner me some recognition, but until then, at least I have my world record. 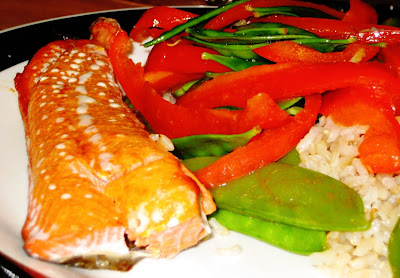 1. Preheat the oven to 400. Spray a large bakign sheet with cooking spray. Place fish on half the sheet. Whisk together the oil, lime juice, and red curry paste. Brush it over the salmon reserving whatever is left over. Place the snow peas and bell pepper on the other half of the bakign sheet and spray with cooking spray/sprinkle with salt.

2. Roast until the fish is just opaque and the veggies are tender, about 12 minutes. Plate the fish and toss the veggies with the leftover sauce, mint, and basil. Serve.

1. Heat the butter in a small sauce pan over medium heat. As soon as it turns frothy and begins to burn, add in the brown rice and stir fry for 2 minutes.

2. Add water per package instructions, lime juice, and salt. Bring to a boil. Then cover and simmer until rice is cooked.

NOTES
Although I thought the salmon was a little bland, I loved the red curry dressing for the salad. It’s fresh and bright flavor paired really nicely with the sweetness of the snow peas and bell pepper. I would make that on it’s own before I make the salmon again.

I loved the rice. Lisa is a genius. It had such a subtle buttery/lime-y flavor. Delicious.

I am submitting the salad to the event No Croutons Required which is being hosted by Jacqueline of Tinned Tomatoes.