A Race, A Recipe and A Restaurant Review – Sachertorte 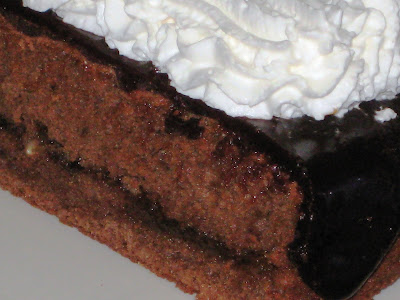 I have a pretty regular blogging schedule. And I am usually pretty good about keeping to it. But sometimes life gets in the way. Sometimes you have to wake up at 5AM to run a half marathon in Queens. Sometimes your parents, your current roommate, your roommate from college who is visiting for the week from San Francisco, and one of your best friends get up with you and come cheer you on. Sometimes you beat your personal record by 6 minutes and come in 20th out of 220 in your age bracket. And when all of these things occur, I think it makes for a pretty good excuse to “miss” blogging. So yes. I ran the Queens Half Marathon yesterday and finished with a time of 1:42:50 according to my watch (longer according to theirs but my GPS also shows that I ran more mileage probably due to the way I took turns, etc.). That is an average pace of 7:47 minute miles, which is crazy even for me. I was so ecstatically happy.

It really is a shame, though, that I had to postpone showing you guys this recipe for the Sachertorte, which is perhaps my most daring baking undertaking yet. See, I’m part of this group called Have The Cake. As part of this group, a new recipe is posted every month that we have to bake. This month’s recipe was the Sachertorte, which is a Viennese chocolate cake that is shrouded in mystery. It traditionally consists of two layers of dense, not-so-sweet chocolate cake with a thin layer of apricot-rum jam in the middle and a chocolate icing on top. The original Sachertorte was made at the Hotel Sacher in 1876 and the recipe is still a well-kept and highly coveted secret.

Having never had a real Sachertorte before, I cannot attest to the authenticity of this recipe. I invited a bunch of friends over to eat it with me, however, one of whom, upon sitting down said, “You know. This looks a lot like a Soccer-torte.” Though not quite spot-on with his pronunciation (according to Wikipedia), I took that as an affirmation that I had actually done something right. After a bite, he followed up his remark by saying, “All the soccertorte’s I’ve ever had have not been very good. But this is delicious.” Apparently, something very right.

As I said before, making this cake was a pretty intense, multi-step process. But it was a lot of fun and made me realize that I love baking and I love the challenge of trying something so ridiculous and new. I am really excited for the baked goods that Have the Cake will challenge me with in the future. 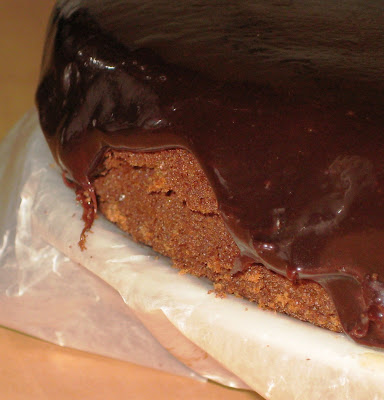 1. Make the cake. Preheat the oven to 400. Grease a 9-inch springform pan. Microwave the chocolate to melt it. Remove from the heat and let stand until cool, stirring often. Beat the butter in a large bowl until smooth, about 1 minute. On low speed, beat in the confectioner’s sugar. Return the speed to medium-high and beat until light in color and texture, about 2 minutes. Beat in the egg yolks, one at a time. Beat in the vanilla and chocolate. In a separate bowl, beat the egg whites and granulated sugar on high speed until soft peaks form. Stir 1/4 of the egg white mixture into the chocolate mixture to lighten it and then fold in the rest. Sift half of the flour over the mixture and then fold in. Repeat with the second half. Spread evenly in the springform pan and then bake until a toothpick inserted in the center comes out clean, about 45 minutes. Cool on a wire rack for 10 minutes. Remove from pan and cool completely.

2. Make the apricot filling. Bring the preserves and rum to a boil in a saucepan over medium heat. Cook, stirring often, until the last drops that stick to the spoon are very stick, about 2-3 minutes. Strain through a wire sieve into a small bowl, pressing hard on the solids. Use while warm.

3. Using a serrated knife, cut the cake horizontally into two equal layers. Brush the top of the cake layer with the apricot glaze. Place the second cake layer on top. Transfer the cake to a wire rack and let cool until glaze is set.

4. Make the chocolate glaze. In a heavy-bottomed small saucepan over high heat, bring the water, sugar, and chocolate to a boil. Attach a candy thermometer to the pan. Reduce the heat to medium and, stirring often, cook uncovered until the temeprature reaches 235 degrees Fahrenheit. Remove from the heat and stir to cool and thicken slightly, about 1 minute. Immediately pour this over the cake and use a metal offset spatula to spoon it over the top and sides. Cool until the glaze is barely set, then transfer to a serving plate and refrigerate for at least 1 hour. Remove from the refrigerator at least one hour before serving. 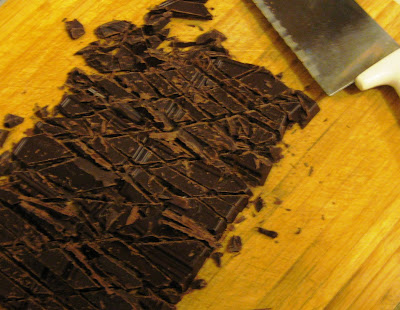 So now last but not least, the restaurant review. As I mentioned before, my roommate from college, Tiffany, has come to visit from San Francisco for a week!! This has made me unbelievably happy since we didn’t think we would see each other until my marathon and I have missed her dearly these past few months. We have many plans for the week, all of which revolve around food. For example, we decided that since this was such a special occasion and will only happen once in a blue moon, especially now that she will have a steady and serious job to answer to, that we would go out to eat at none other than Bobby Flay’s restaurant – Mesa Grill! The food here was absolutely amazing, starting with the bread basket that was placed on the table (it had blue corn/yellow corn mini muffins!) and ending with the fabulous chocolate corn bread pudding for dessert. Here’s a look at what we ordered. 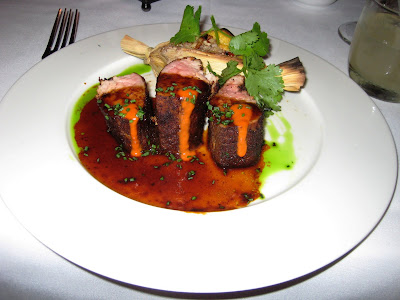 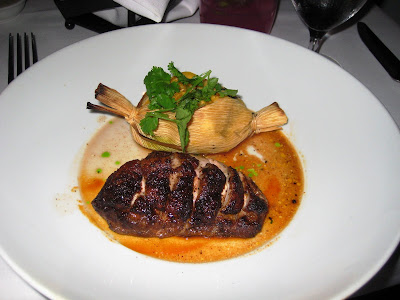 For dessert, we both had: Chocolate Corn Bread Pudding with Dulce de Leche Sauce and Creme Fraiche Sauce. 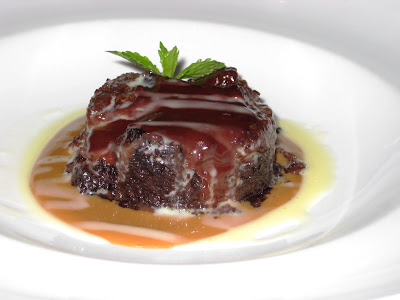 All in all, a seriously heavenly meal. A girl could get used to this.

22 Responses to A Race, A Recipe and A Restaurant Review – Sachertorte