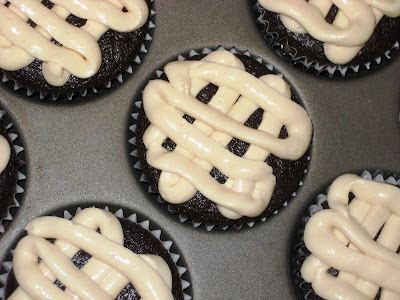 I have a bad track record when it comes to baking with chocolate. The last chocolate cake I made came out really dry and let’s not even talk about my first batch of brownies (okay they were black bean brownies and I should have never even tried to go there, but still). Thankfully I threw both of those away before anyone had a chance to happen upon them (except for my mom but she agreed that we could pretend they never happened. Aren’t moms great that way?).

And I was willing to pull out the white flag. Throw my hands up to the gods of the cacao trees and say, Okay I get it. You win. And walk away from the entire situation none the worse for wear. I like vanilla better anyway, I told myself as if it were a consolation prize.

The problem is that most people out there like chocolate. They like chocolate enough to say things to me like, Hey why don’t you make some chocolate cupcakes for your friend Amma’s birthday? And I am stubborn and strong-willed enough to not want to concede that maybe I can’t do anything I set my mind to, and thus end up replying with something like, Wow what a great idea!

And then I go home and flip out because when push comes to shove I will actually have to bake these cupcakes and serve them to people and there is a very good chance (if history repeats itself) that they will be awful.

But they weren’t. They were actually very good. So for everyone out there who is mortally afraid of baking with chocolate. This is the recipe for you.

I am submitting this to this week’s Blogger Secret Ingredient, which is being hosted by Anna over at London Foodie in New York. 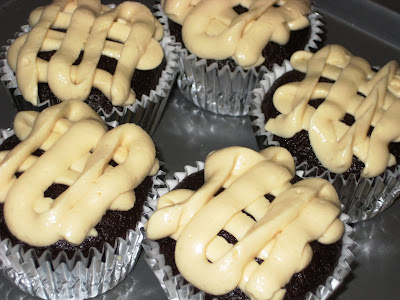 Chocolate Cupcakes with Caramel Cream Cheese Frosting
Serves 24, adapted from Not Without Salt

1. Preheat oven to 350. Line two muffin pans with cupcake liners. Combine the flour, cocoa, baking soda, sugar, and salt in a bowl and set aside. In a separate bowl, whisk together the water, oil, 2 tsp vanilla, and vinegar. Mix the wet into the dry and stir until just combined. Fill the cupcake liners and bake for 20 minutes or until the top is set. Cool in the pan for 5 minutes and then on a wire rack.

2. For the frosting, whip together the neufchatel and butter until fluffy. Add in the half and half and vanilla. Mix in the caramel ice cream topping. Add in the confectioner’s sugar until frosting has desired taste. Put in the fridge for at least 15 minutes. Frost cupcakes. 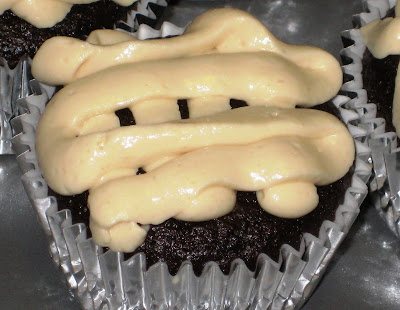