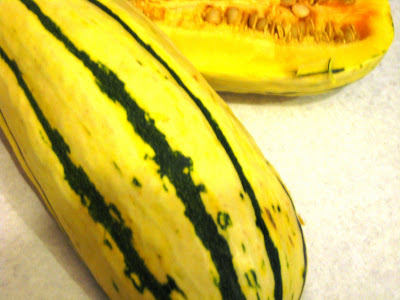 Even though I love summer weather and spring scenery, fall is invariably one of my favorite seasons. Why? Simple. The food. Cranberries, sweet potatoes, and winter squash are some of my favorite ingredients of all time. Not to mention the fact that they are all nutritional superstars!

So you can imagine the intensity of my elation when I walked into Whole Foods this past Friday. And sitting in front of me. Was the first winter squash harvest of the season!! I danced. I swooned. I almost made out with the Whole Foods produce guy. And a few random customers who just happened to be in the nearby vicinity.

There were acorn squash, butternut squash, kabocha, and spaghetti squash – all shipped in from Vermont and/or Massachusetts (my “home” state!). Instantly, all of my previous dinner plans went out the window. There was no way I was passing up the first of fall’s bounty. But what to make? Instantly, I recalled a recipe for baked winter squash with brown sugar, maple syrup, and butter that I made last year, before the blog, by Paula Deen (one of the few recipes of hers that I can stomach without extreme modification). The sweetness of the syrup mixed with the saltiness of the butter and the starchy, nutty goodness of the squash make this one of my favorite ways to enjoy winter squash.

Okay so now that I had a recipe in mind, I had to pick a squash. I was going to go for kabocha when I spied an unfamiliar type of squash sitting by itself in the corner. Delicata squash, read the label. I shrugged, carefully placed two in my shopping cart, and moved on to the next item on my list.

When I got home, I decided to look into what exactly a delicata squash is, and so I googled it. According to a wide variety of sources, delicata squash is an heirloom squash, meaning that it is a cultivar that was commonly grown during early periods of human history, but which is not used in modern large-scale agriculture (thank you Wikipedia..the best source on earth). Thus, they are grown for flavor and not for their ability to be mass-produced and shipped thousands upon thousands of miles away. Can’t argue with that.

Delicata squash is also commonly referred to as sweet potato squash (for its taste), peanut squash (for its shape), and/or bohemian squash (because it owns a studio in the West Village, only smokes organic herbal cigarettes, and is a self-proclaimed starving artist). It has a creamy pulp that tastes like a cross between sweet potatoes and corn. The skin is very thin and is thus edible. It was originally introduced by the Peter Henderson Company of NYC in 1894 and was popular throughout the 20s. It then fell into obscurity for 75 years and is only now becoming popular again. Although it can be grown year-round, it peaks between late summer and early fall.

Seeing as how I am on a mission this year to try as many different winter squash varieties as I can get my hands on, I was certainly grateful to have found this.

I am submitting this recipe to this month’s Monthly Mingle, which is being hosted over at Jugalbandi, the theme of which is heirloom recipes! 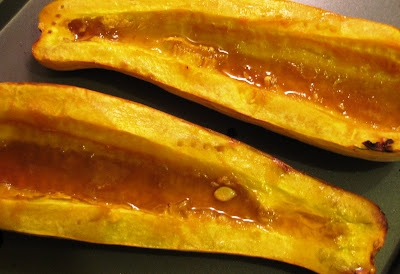 2. Cut the squash in half lengthwise. Scoop out the pulp and the seeds and discard. In a small bowl, mix together the brown sugar, butter, and maple syrup until the brown sugar has dissolved. Rub the squash cavities and cut sides of the squash with the butter mixture and place them on a baking sheet, cut side up. Bake until they are tender and pierced easily with a fork (depends on what kind of squash you used – these took about 30 minutes). Serve 1 half per person. 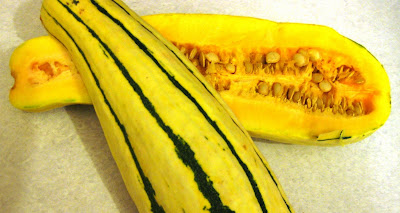