Pasta with Cauliflower, Walnuts, and Feta…Eat.Live.Be! Indian-Spiced Chickpeas with Rhubarb and Spinach

Tofu (or Chicken) in Green Chile, Mint and Cilantro Sauce with Sweet Potatoes and Cauliflower 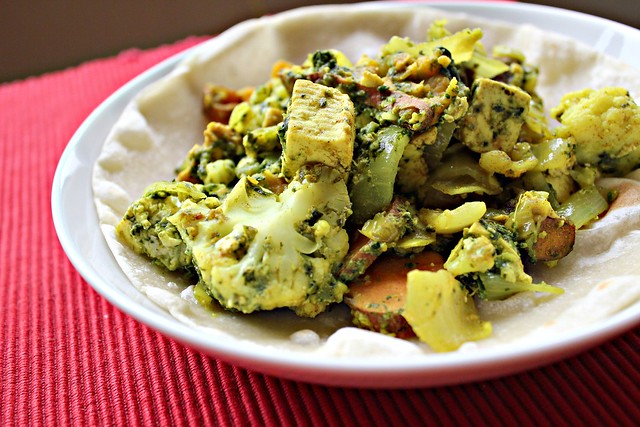 A few weeks ago, my brother came over for dinner.

(Don’t you just love stories about my brother?  Today is his birthday.  And his graduation.  And he’s taking his third actuarial exam so that he can be let into the world to do things like run statistics for Deloitte and travel all over the globe while leaving his poor sister alone and lonely in New York.  And instead of holding his hand as he walks down the aisle, I’ll be in my apartment learning about the musculoskeletal system and convincing myself that I have every autoimmune disease under the sun.  I wish I could be there instead of here, diagnosing myself with lupus for the 62nd time this year.  Sigh.  Good luck Daniel!)

By which I mean, he bought food on the way over from a doctor’s appointment and ate it at my kitchen table.

My.Kitchen.Table. Which hasn’t seen any take-out other than sushi in the two years since I’ve lived here.

It almost buckled under the weight of his chicken parm sandwich from the sheer shock of it all.  So did I. 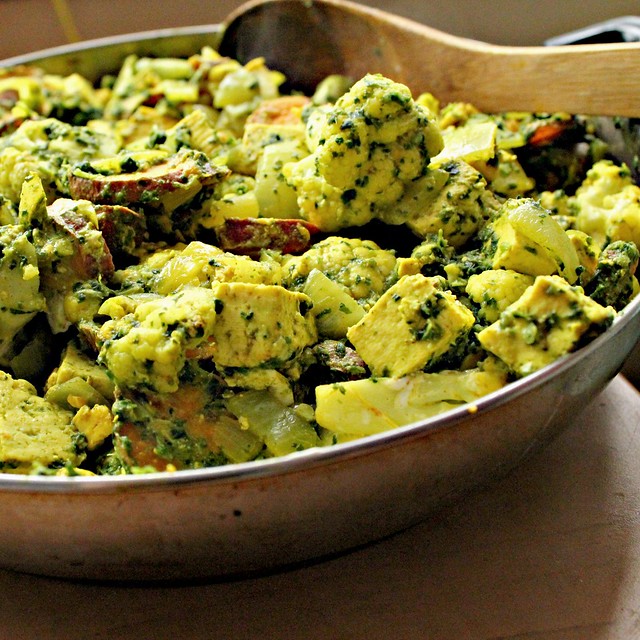 It was almost as if his sister isn’t a food blogger and thus doesn’t have mounds of food on hand at every second of every day to stuff down his throat!  What kind of weirdo crazy bizarro world does he live in!?!?

He may be able to crunch numbers faster than I can eat a peanut butter and jelly sandwich (okay…probably not), but he has a lot to learn about life.

At least he requested something other than a vanilla cupcake for his birthday this year.  But only after I twisted his arm a few times and threatened to hit him with the pounds upon pounds of blocks of chocolate I always seem to have in my apartment.  Progress.  Baby steps. 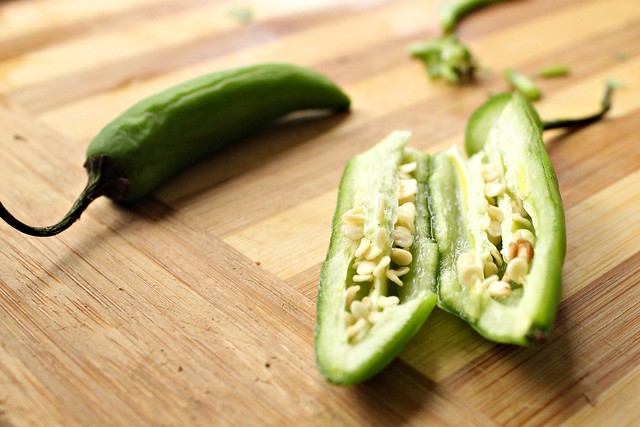 Anyway, he ate his greasy calorie-clogging sandwich and I ate my curry.  We talked, we laughed, we studied.  (Yes.  We studied.  Him: previously mentioned actuarial exam.  Me: the-test-that-shall-not-be-named-that-I-shall-take-in-five-days. Yikes.)

And then he went home and told my mother that I had had mush for dinner.

I only know this because she called me in a state of panic about the situation.  She was almost in tears at the thought of her daughter eating mush and even though she was trying to be so cool, calm, and collected about it, I could hear the gasps for air and smothered sobs that infiltrated every word as she asked me what I had had for dinner that night.  She can be so melodramatic.

I can’t imagine where she gets it from. 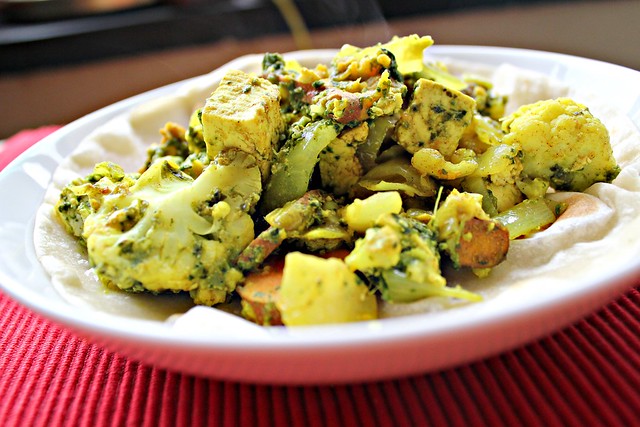 I don’t think they understand that I was probably born into the wrong continent.  In all likelihood, I was supposed to grow up on curry and eat naan for breakfast every day.

Well, there’s only one way to make up for lost time.  And that’s to finally cook from the six thousand cookbooks I own with the word “curry” in the title.  That I’ve been too intimidated to tackle for the past few years that I’ve owned them.

Up till now they’ve sat, collecting dust, on my shelf.  Because, you know, it’s hard to just delve into food that isn’t ingrained in your bone structure.  I mean, I’m pretty sure every one of my meta-tarsals can make tomato sauce on a whim. But curry powder?  Garam masala?  Cardamom pods?

However, the only way to tackle a phobia is by sensitizing yourself to it.  Dive in bellybutton first.  Let’s go. 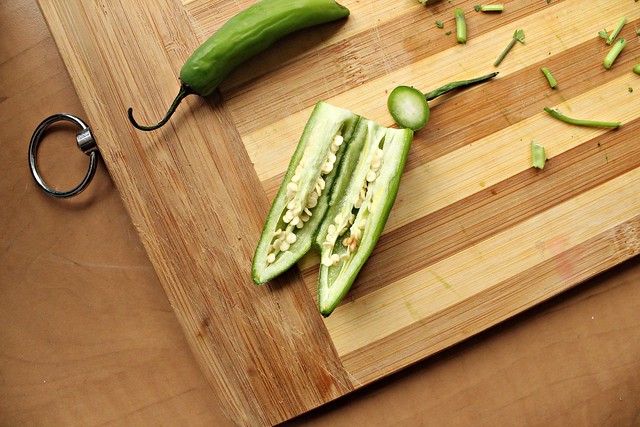 This dish takes a spicy Indian version of chimichurri and pairs it with a warming cinnamon/cardamom-infused yogurt sauce so that it creates a beautiful medley of flavor in every bite.  Perfect to top some sauteed tofu (or paneer or chicken), sweet potatoes, and cauliflower, the latter two of which I just happened to have on hand and which also just happened to work perfectly here.  Definitely not your average bowl of mush.  Not by a long shot.

1. Preheat the oven to 400.  Put your sweet potato coins in a lined and greased baking sheet. Spray with cooking spray, sprinkle with salt and roast until fork-tender, about 20-30 minutes.  When done, remove from oven and set aside.

2. Place the cilantro, spinach, ginger, garlic, chiles, mint, lemon juice, and 1/2 tsp salt in a food processor or blender and process to a smooth paste.  Add a little water, if necessary, to facilitate blade movement in blender.  (I added about 2 tbsp).  Remove and set aside.

3. Whisk the yogurt until smooth and set aside.  Heat the oil in a medium saucepan and cook the onion for 5-6 minutes, stirring frequently, until softened.

4. Add the tofu and stir fry over medium-high heat for 2-3 minutes until the edges start to brown.  add the turmeric, sugar, cinnamon, cardamom, and salt to taste and stir-fry for an additional 2 minutes.  Add the cauliflower florets.  Cook for another 2-3 minutes, covered, so they steam.  Reduce the heat to medium and add the yogurt.  Cook for 1 minute.  Add the sweet potatoes and cook until heated through.

5. Add the herb and spice mixture and cook for 4-5 minutes, stirring continuously.  Remove from the heat.  Serve over rice, with naan, or on a tortilla if you have no regard for cultural norms (ahem).

I am submitting this to to Hearth and Soul Blog Hop! 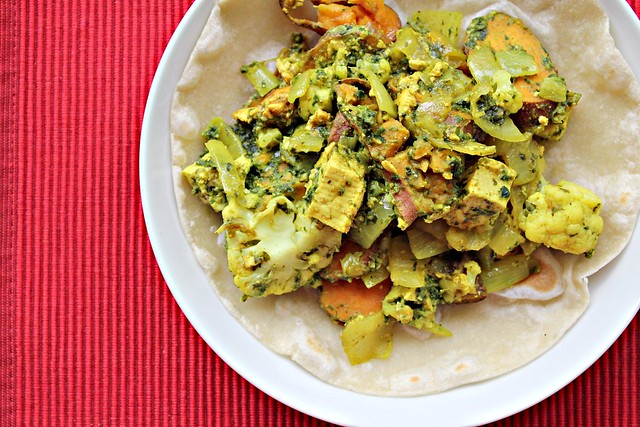 73 Responses to Tofu (or Chicken) in Green Chile, Mint and Cilantro Sauce with Sweet Potatoes and Cauliflower