Regional Recipes – Scandinavia Round Up!! Have the Cake – Pumpkin Apple Pie 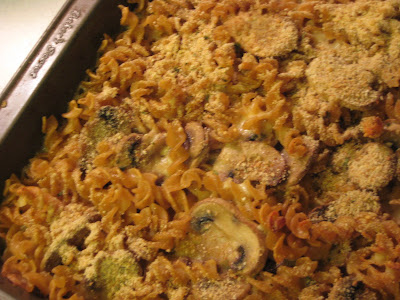 From what I can tell, bloggers are generally an optimistic group of people. We always have positive things to say about each other’s food (either that or we do the whole – if you don’t have anything nice to say, shut up – thing) and in general I feel like we try to say good things about the products that we review.

So I may be going against the grain here with my next comment.

I didn’t love Peter Mayle’s French Lessons: Adventures with Knife, Fork, and Corkscrew. I don’t know what it was, but I just couldn’t get into it. The book is broken up into chapters, each of which describes one of Mayle’s many experiences with what I like to call France’s culinary extreme sports. He basically travels around France going to all sorts of festivals and crazy foodie landmarks, such as the Foire aux Escargots, the Frog Fair in Vittel, le Club 55 – a nudist restaurant on Pampelonne beach, and the Beaune Wine Auction to name a few. Maybe it was the disjointed nature of the book that didn’t do it for me. Maybe it was his dry sense of humor. Maybe it was that he didn’t spend enough time describing the food (at least for my liking). Who knows. You can’t account for taste.

That being said, I’m still a blogger. And so I am going to throw a positive spin on things. There was one chapter that I did actually like. And if you know me, and have read the book, then you will absolutely hands down know what it is.

During his vast culinary adventures, Peter Mayle attends the Marathon du Medoc, which is almost like a satire of a real marathon. Except that it actually occurs. As Mayle writes, “The course conforms precisely to the official distance: 26.2 miles, 385 yards – or 42.195 kilometers. And there, any resemblance to a conventional marathon ends.”

Runners get dressed up in ridiculous costumes (the men often resorting to cross-dressing), wine is handed out instead of gatorade and Gu gels at twenty different points along the course, and speed is sacrificed for the sake of enjoyment. Not to mention the huge pasta party that occurs the night before to carb load.

Now, I may not be able to understand wanting to drink wine during the course of a race. Or having a desire to dress up as a strawberry or a nurse. But carb loading, I get. However, the pasta dishes in question are not exactly the light and simple fare that I usually eat before a long run. Instead, they are carbs “a la bordelaise” – so heavy that even Mayle says, “Not being blessed with an athlete’s cement-mixer metabolism, I found it impossible to believe that anyone would be able to walk the morning after a dinner like this, let alone run.”

Point well taken. My pre-race dinner consisted of a pasta with roasted veggies in an olive oil sauce from The Cheesecake Factory. That I only ordered after asking the waiter three times whether or not there was any cream in it. You can never be too careful.

But, the race being behind me, I felt that a good way to commemorate both this book and the carb-loving spirit of the runner would be with the heaviest pasta dish I could think of. A dish that would really capture the “to hell with it all!” spirit of the Marathon du Medoc. Macaronis et Fromage Avec Des Champignons. A play on the macaroni and cheese that we all know and love. Except that it is saturated with Gruyere instead of cheddar or American cheese. And has mushrooms.

Not one for the faint of heart (or the hypercholesterolemic) this dish is the picture of comfort food. And also my submission to this edition of Cook the Books.

Although I wouldn’t recommend eating it the night before you plan to run 26.2 miles. But the night after, anything is game. 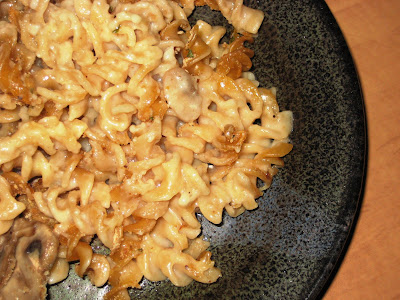 Macaroni and Cheese with Gruyere and Mushrooms
Serves 6

2 1/2 tbsp butter
20 oz cremini mushrooms, sliced
1 lb pasta
1/4 cup flour
3 cups milk (I used almond milk because that is my dairy beverage of choice)
12 oz gruyere, grated if you have the patience or cubed if you do not
1/2 cup bread crumbs
salt and pepper to taste

2. Set up the water for the pasta and cook until the pasta is not quite al dente. Strain and pour into the baking dish.

3. Cook the mushrooms in a non-stick skillet for about 10 minutes. Add salt and pepper to taste. Strain and add to the pasta.

4. Return the pasta pot to medium heat. Melt the butter in the pot. Whisk in the flour and reduce heat to low. Cook until bubbling, for about 1 minute. Whisk in the milk (hot) and boil over high heat. Stir in the Gruyere. When it is melted, remove from heat. Season it with salt and pepper and pour it over the pasta/mushroom mix. Mix all of this together in the casserole dish. Sprinkle with breadcrumbs and dot with a little bit of butter. Bake for 25-30 minutes or until the sauce is bubbling and the bread crumbs are browned.

I am also submitting this to Presto Pasta Nights, which is being hosted by Haalo of Cook (Almost) Anything At Least Once. 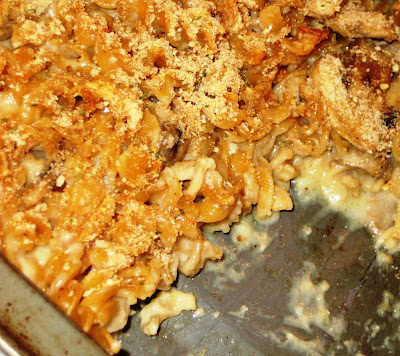 Now that we are done with the food, I am going to give you a little taste of my SF trip. I think it will be easier for me to do it in installments than all at once. And much more fun.

I got in on Thursday night and was met at the airport by the lovely Tiffany, my roommate from college. I was so excited to see her, it was ridiculous. This girl is basically my soulmate in female form. We lived with each other for three years without ever having a single fight. I think that says something.

We met in the BART station and headed back to her apartment in Berkeley where I was greeted by a batch of butterscotch blondies that she had whipped up for me. They were amazingly delicious. I proceeded to eat half of the pan. We talked for a bit that night, trying to catch up as best we could, and then eventually fell asleep. 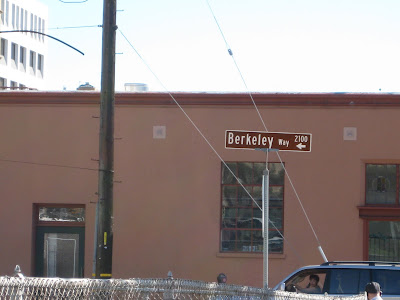 The next morning (Friday), Tiffany had to go to work and so I was left alone to wander the streets of Berkeley. I went for a 30 minute run, as per my coaches’ instructions and got a tour of her neighborhood. 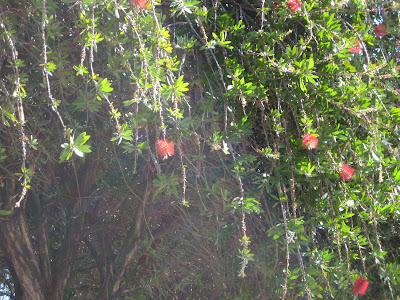 As you can see, it was beautiful.

I met up for lunch with a post-doc who I worked with in a lab at MIT, who now has a tenure track position at Berkeley. We got Thai food at this place called Cha-Am, which is apparently the best Thai restaurant in Berkeley. I ordered the Penang pork curry which was absolutely amazing. The first of many good meals in SF. 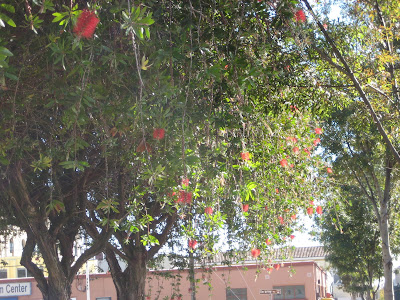 After lunch, Danica took me to the Campanile on Berkeley’s campus, which is basically this bell tower that you can go to the top of and thus see all of the city. She thought it would be the fastest and easiest way for me sightsee. The view was absolutely gorgeous. There were mountains, the bay, and really pretty houses. I loved every second of it.

Danica and I then parted ways since she had to go back to lab and work on a grant application and so I meandered around Berkeley for the rest of the afternoon. Which is always a dangerous thing. Especially when I passed by a 1/2-price-used-bookstore. And proceeded to go in and look at the cookbooks for an hour. And then buy two of them. Yes, I am a glutton for punishment.

I then walked around a bit more, trying to pass the time until Tiffany got home from work. I walked down Shattuck Street, which was filled with small shops and tons of restaurants. I felt like I could eat out here every day for a year and still not manage to eat at the same place twice. When it was nearing five o’clock, I headed back to her apartment, stopping for a snack along the way. I got pumpkin spice flavored bubble tea (surprise surprise). It was delicious. 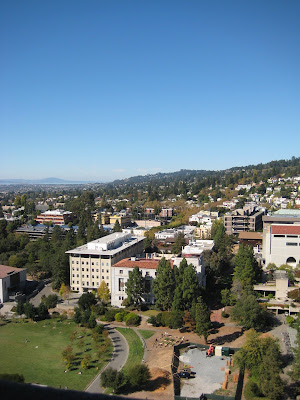 Back in Tiffany’s apartment, I packed up my things in preparation for my relocation to the hotel room in SF that was being provided to me by Team In Training. We left Berkeley at around 6 for the big city, both nervous and excited about the unknown adventures that lay ahead (okay, I was nervous and excited. Tiffany was probably just excited). And thus, the real expedition began… 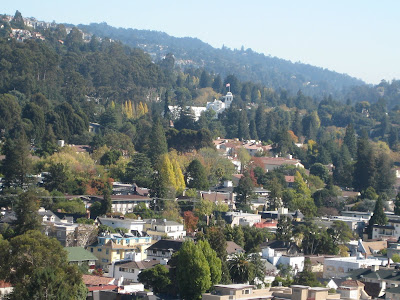