Have the Cake – Pumpkin Apple Pie 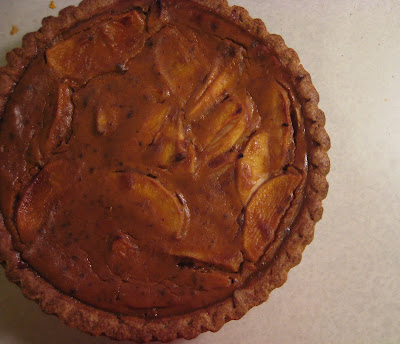 If you had to choose something to eat every day for the rest of your life, what would it be? 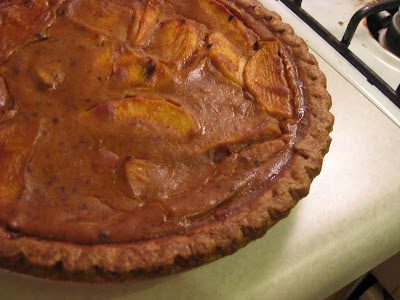 The only reason I am asking is that when Justin came over to have a piece of this pie, he said that his dish of choice would be pumpkin pie. Hands down. No questions asked.

I have never seen someone so passionate about a baked good before.

So then I started thinking about it. And I would be really hard-pressed to choose.

My favorite desserts are ice cream, tiramisu, and bread pudding. But every day? From now until eternity? Ever and anon?

Maybe not dessert then. Maybe something savory is more in order. Lasagna? Ravioli? Sweet potatoes?

But would any of these be worth not ever having dessert again? It’s a vicious cycle. Not gonna lie.

When I found out that this month’s Have the Cake recipe was apple pie, I was really excited. But also kind of nervous. As I have noted before, pies are hard. The filling needs to be just the right consistency, homemade crust is kind-of a pain to make (who really knows how to “cut in butter” anyway?), there’s a fine line between the pie being too sweet or completely lackluster in the flavor department, etc.

Or maybe I’m just a worrier at heart.

But when I saw this recipe for Pumpkin Apple Pie on the Whole Foods website that had gotten rave reviews, all of my anxieties and hang-ups went out the window. Sometimes you’ve just gotta jump in feet first, I thought. Things may turn out badly. But then again. Maybe not.

And sometimes, that’s a risk you just have to take.

(Note to self – trying to philosophize on life through pie metaphors may seem like a good idea at 6AM but you should prepare yourself for the possibility that you may cause other people to think you are on crack.)

The pie was actually really good, though. It was an ideal combination of my favorite fall produce. Which, between the two, I probably do actually eat every day. What with the 12 pounds of winter squash and all. And the 5 lb bags of apples that Sophie and I keep buying. It’s a tough life but someone’s gotta eat it. 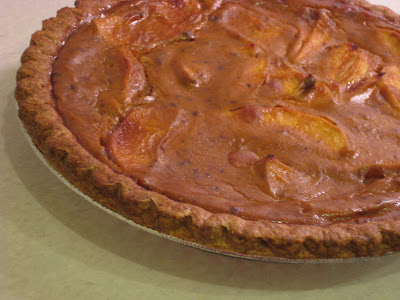 1. Preheat oven to 425°F. Put brown sugar, cornstarch, 1/2 teaspoon of the cinnamon, 1/4 teaspoon of the salt, water and butter into a medium pot and cook over medium heat, stirring constantly, until mixture comes to a boil. Add apples and cook, tossing to coat in sugar mixture, 3 to 4 minutes more. Remove from heat and set aside.

3. Pour apple mixture into pie shell then spoon pumpkin mixture evenly over the top. Bake for 10 minutes then reduce temperature to 375°F and bake until filling is just set in the middle, about 40 minutes more. Set aside on a wire rack to let cool completely then cut into slices. 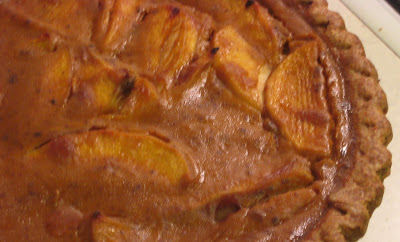 Okay now back to the SF recap. For today’s edition, I think I will describe the food that I ate. Since we are foodies. And all.

This picture has nothing to do with food. But it is me, in the hotel lobby, next to the Team In Training schedule-of-events. I adored my experience with Team In Training and would train with them again in a heartbeat. Fundraising was the hardest part for me, but everyone was so supportive and so helpful. And it was nice to have a team there on race day to calm my nerves and hug me when I got really anxious and reassure me that everything would be okay. 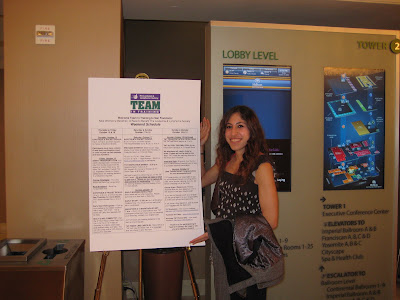 When I was researching restaurants in SF I was completely overwhelmed by the myriad of options. Thankfully, Justin from JustCookNYC had just visited there and had a gazillion suggestions for me!

One of his suggestions was Burma Superstar, a Burmese restaurant that has been featured on the Food Network a few times. Although I have had Burmese food before in NY (it is kind of a fusion between all Asian cuisines – Thai, Indian, Chinese, etc.), it was only from a crappy hole in the wall. So I was excited to try some good, quality dishes. 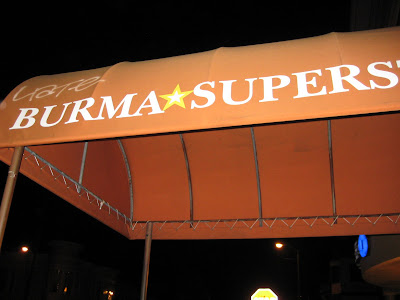 Tiffany and I waited an hour for a table here (it was packed!) but it was so worth the wait. We started out with an appetizer plate of this Chicken Coconut Curry dip with Paratha to dunk in. The coconut flavor was so deliciously prominent. I loved it.

For a main dish, I got the Pumpkin and Pork Stew while Tiffany got a curry dish. We also split an order of coconut rice that was topped with some fried onions. Everything was amazing. This place is a must-go if you ever find yourself wandering the streets of SF while hungry. 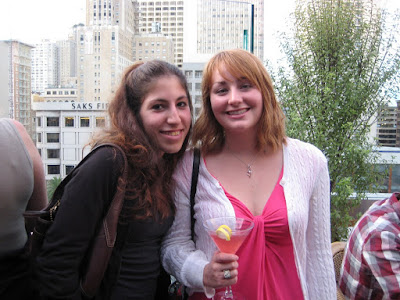 The next night was pre-race night, so we were all about the carb loading. We were going to be adventurous and hit up one of SF’s many Italian restaurants but then I got cold feet about the whole thing (I was worried about eating something that would bother my stomach) and so we ended up at The Cheesecake Factory. Yes, it is ridiculous that I went all the way to California to eat at a chain restaurant. But I figured tried and true is the way to go sometimes. And although it may demolish my credentials as a foodie, Cheesecake Factory is good. I ordered a dish called Evelyn’s Favorite Pasta, which consisted of tons of roasted veggies in an olive oil based sauce over penne. It was good. 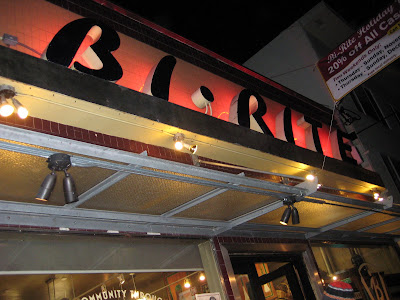 Now we come to Sunday. Post race. I was ravenous.

First, we got brunch at this diner-ish place near the hotel. I ordered the pumpkin crepes with a side of English muffins (I would like some carbs with my carbs, thank you very much!). They were really good, but the hostess was kind of obnoxious so I am not going to go into very much detail. Tiffany’s croque monsieur was mediocre. Nothing to write home about.

After brunch/lunch, I lay in bed all day. Which apparently, after 26.2 miles, forces you to work up quite a hunger. So then we headed out to Mission for some Mexican food and ice cream!

We ended up at a hole-in-the-wall taqueria for dinner. The food, while being simple street food, was absolutely delicious and completely authentic. SF is apparently the place to go for good Mexican food. I have never had anything in NY that compares. I ordered the carnitas dinner platter, which came with some guacamole, chips, tortillas, rice, refried beans, and salad. All for under ten dollars. Plus they had a ton of salsas sitting out at a salsa bar that you could sample. I, as someone who has and does eat salsa from the jar with a spoon as a snack, was in heaven.

Then, also per Justin’s suggestion, we went to Bi-Rite Creamery, which supposedly has the best homemade ice cream in all of SF. I ordered a sundae with hot fudge, whipped cream and brownie topping over a scoop each of Cinnamon with Snickerdoodle and Malted Vanilla with Peanut Brittle and Milk Chocolate Pieces ice cream. What is the point of running 26.2 miles if you are not going to eat to your heart’s desire? Right? Right.

This ice cream was JP Licks-worthy (my favorite ice cream joint in Boston and the place where I will be headed right after the Boston marathon). It’s a good thing it is now 3,000 miles away. Otherwise we might have a problem.

All in all, SF is definitely a foodie paradise when it comes to restaurants. There were so many there, all of which looked amazing, and so I will have to go back. Many, many times.

And because inquiring minds want to know, the cookbooks I bought were The Curry Bible by Mridula Baljekar and Heirloom Baking with the Brass Sisters by Marilynn and Sheila Brass. Plus I should also mention that I won Vegan Cupcakes Take Over the World from Xiaolu over at 6 Bittersweets. For which I am eternally thankful and ridiculously excited. 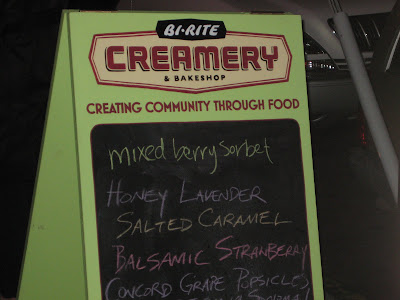 33 Responses to Have the Cake – Pumpkin Apple Pie