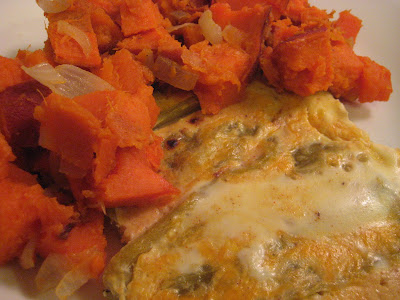 Also known as the ever-popular catchphrase “What Would Ree Do?” (Yes, Ree Drummond is the new Messiah, haven’t you heard. Her mission – to deliver us from take-out, tv dinners, and fat-free cooking.) 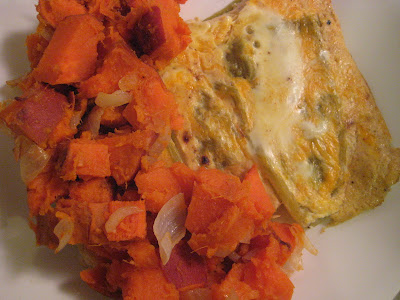 So yesterday, when I found myself on crutches due to what I can only imagine is a pulled groin muscle (I couldn’t make this stuff up if I tried. No jokes about me and the yeast getting wild and crazy. Really, talk about perfect timing. NOTE – if this confuses you, read the previous post.), I set my newly purchased edition of The Pioneer Woman Cooks on the floor, genuflected in front of it, and said, “Ree Drummond, queen of all things good and delicious. What would you do?” 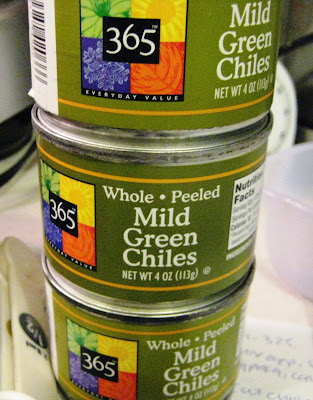 Or so I thought. As I started to absentmindedly flip through the cookbook, checking my watch every few pages to see how much time had passed. (I decided I’d give her five minutes. Pioneer Women are busy. She might be in the middle of rounding up some cattle or cooking something delicious for Marlboro Man. And I wouldn’t want to interfere with that.)

So I’m turning the pages. Turning turning turning. And then all of a sudden, they won’t budge. And I mean, I know that my upper body strength is not what it ought to be. But a page in a cookbook? Really? Really?

I collapse on the floor in despair (how much of this was due to actual despair and how much was my knee giving out due to pain in my inner thigh is unclear) and in my hopelessness, glance down at the page that I am stuck on.

Ree Drummond wanted me to have breakfast for dinner.

And when Ree Drummond tells you to do something, especially if it’s food-related. You do it. 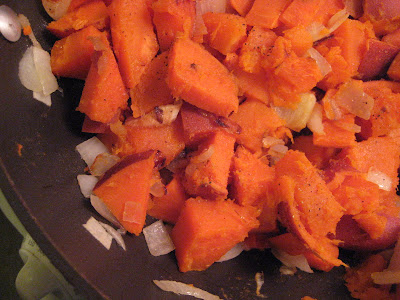 1. Place potatoes in a large pot and cover with water. Bring to a boil and cook until potatoes are fork-tender. When they are done and cool enough to touch, dice them into 1-inch pieces.

3. Heat oil and butter over medium-high heat. Cook the onion until browned.

4. Throw in the diced potatoes. Stir well and then pack them in. Cook without stirring or interfering for a few minutes. Then flip them and cook again. Do this until they reach desired brown/crispiness. 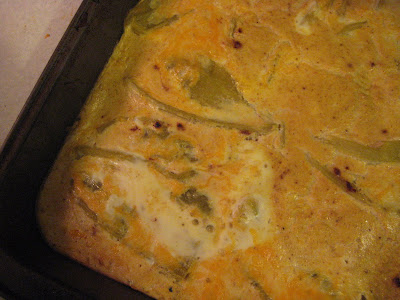 2. Whisk together all ingredients except for the peppers.

4. Pour the egg mixture over the top. 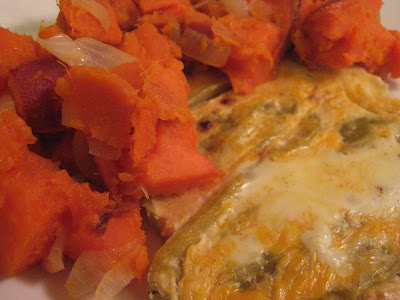 As you can see, the Sweet Potato Queen in me has reared it’s ugly head again. Ree used white potatoes. But it has really been too long since I’ve had sweet potatoes. Mostly due to the fact that my attention has been occupied by a certain other orange vegetable. Which I won’t name for fear of setting the sweet potatoes off on a jealous temper tantrum. The sweet potatoes were delicious in this though and contrasted really nicely with the spicy/saltiness of the eggs. Which were fabulous.

I am submitting this to the current edition of Foodie Fans of the Pioneer Woman, the theme of which is Breakfast/Brunch.