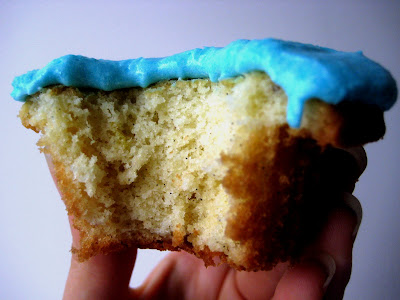 My conversation with my brother went something like this.

(Ah yes. More family drama. Get on the edge of your seat. You know this is gonna be good.)

“Daniel. What do you want me to bake for you for your 21st birthday?”

(As a family, we kind of have a love affair with tequila.) 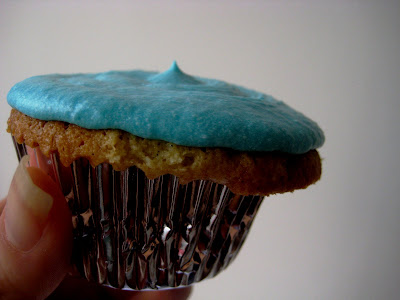 Is anyone else sensing some kind of communication barrier here?

“Daniel. Daniel, Daniel, Daniel. Let me rephrase the question. I can make you anything you want. Anything in the world. So what would you like?” 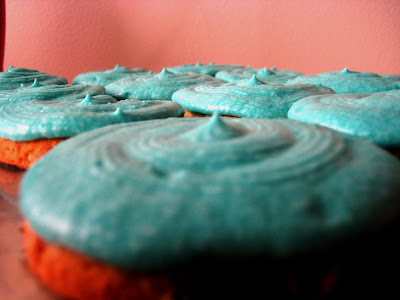 Hmmm. Yeah I’m just not getting through to him.

“Okay. We are obviously not understanding each other. Let me explain something to you. I. Like. Challenges. Vanilla-on-vanilla action. Not a challenge. Think big. Dare to dream. Hit me with your best shot.” 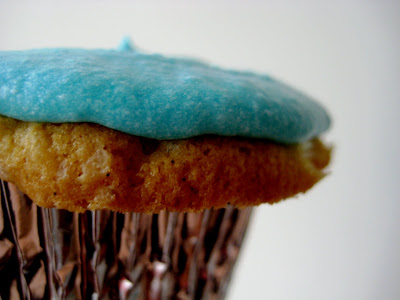 Sigh. Yes. I do share half a gene pool with this boy. And yes. He’s still a mystery to me.

Fine. He wants vanilla. He’s gonna get vanilla. (Yes, I am vindictive like that.)

In an attempt to make his request a little bit more. Well. Scintillating. I searched high and low for the most interesting recipe I could find. And stumbled across this one for Tahitian Vanilla Bean Cupcakes. Luckily, I had some Tahitian Vanilla Beans sitting on my windowsill (you should see the things sitting on my windowsill) begging to be used, that had been sent to me by the kind souls over at MarxFoods. Perfect. Timing.

I also thought it might be fun to dye the buttercream frosting blue. It was.

Except for my fingers. Which are now dyed an indelible shade of sky blue.

Maybe the real challenge in these is going to be trying to figure out how to not turn yourself into a Smurf while making them. Maybe. 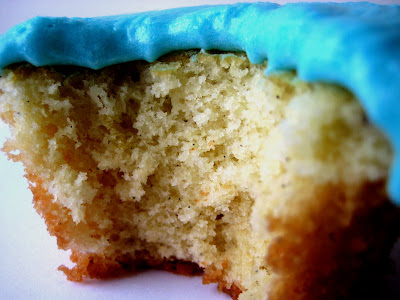 In a small bowl, whisk the eggs, the vanilla seeds, the lemon zest, and 3 tablespoons of the sour cream. Set aside.

In a large bowl, mix the flour, baking soda, baking powder and salt. Add the butter and remaining sour cream to the dry ingredients; mix on low speed until the dry ingredients are moistened and a higher speed will not cause the flour to fly out of the bowl. Then mix on medium speed for 1 1/2 minutes. Scrape down the sides of the bowl.

Then add the egg mixture in 2 additions, beating on medium speed for 30 seconds after each addition and scraping down the bowl in between. Finish by hand if any parts have not incorporated so as to not over-beat.

Fill each cupcake 3/4 full. Bake for 20-25 minutes, until a tester inserted into the center cupcake comes out clean with a few crumbs attached. Let the cupcakes cool in the pan for 10 minutes and then remove to cool completely before frosting.

1 stick butter, room temperature
4 cups confectioner’s sugar (I usually don’t measure confectioner’s sugar and just add it until it tastes/feels right so I’m not sure that I actually used 4 cups. But it was definitely somewhere in that vicinity.)
6 tbsp almond milk
2 tsp vanilla

1. Use a fork or electric mixer to cream the butter. Gradually work in the sugar, alternating with the cream and beating well after each addition.

2. Stir in the vanilla (and a few drops of coloring gel, if using). If the frosting is too thick to spread, add a little more cream, a tsp at a time. If it is too thin, refrigerate; it will thicken as the butter hardens.

I am submitting the frosting to IHCC, the theme of which for this week is POTLUCK!

And, since this was my first time EVER working with real vanilla beans, I am submitting the cupcakes to this week’s Weekend Herb Blogging, which is being hosted by Astrid of Paulchen’s Foodblog. 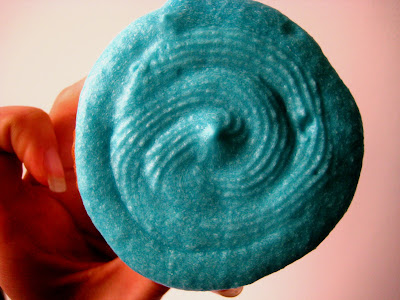