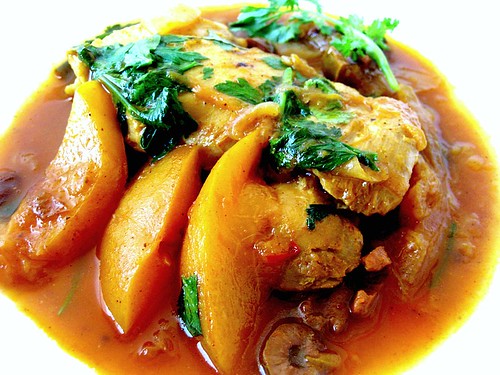 “I’m here to check your oven.”

That’s what the maintenance guy said when he rang my doorbell on Wednesday afternoon and then proceeded to enter my apartment without actually waiting for me to open the door.

Mind you.  This was the third time he’d been there in the past week and a half.  He obviously felt like he owned the place.

After each previous visit he left me a little post it note.  On which he wrote the date and time that he had arrived and then checked off the little box that said “Must return.  Work not completed”.

Can you imagine coming home to something so disheartening?  Not once.  But twice.

And to think, it would have been three times, had I not been home on Wednesday at 2 pm.

Armed and ready for action. 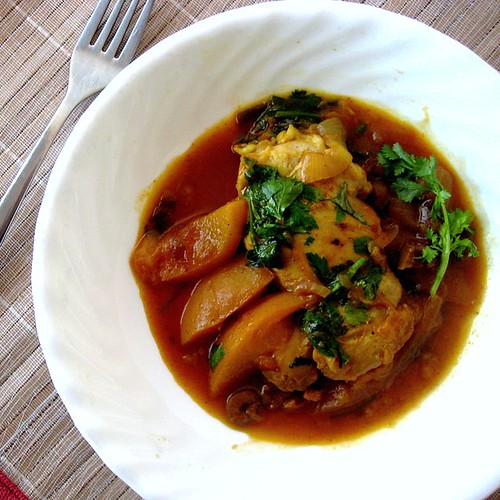 Now.  If this were a Danielle Steel novel, the man who rang my doorbell would have been young and virile.  With eyes the color of cobalt.  He would have been at least five foot ten and would genuinely enjoy running through Central Park and eating Middle Eastern food, not necessarily at the same time.  He would also have a relative in publishing who would proceed to give me an offer on my first cookbook.

He would have rang my doorbell.  Waited for me to open it.  And then, when he laid eyes on me for the first time, he would have said, “Ms. Bruno.  Would you do me the honor of allowing me to fix your oven?  I promise to work day and night.  As long as it takes until the job is finished.”

Yes.  That would have been ideal. 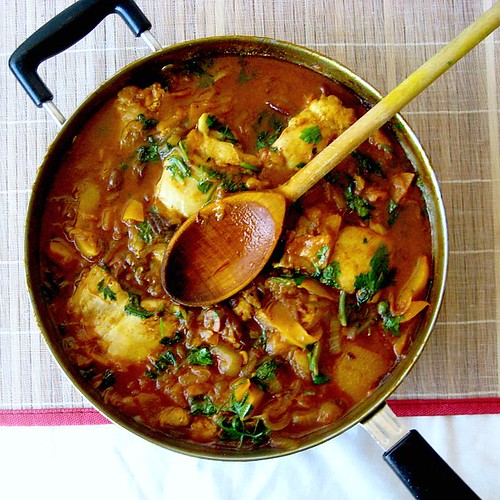 Instead what I got was a more than middle aged man.  Who wanted to spend as little time fixing my oven as humanly possible.

Anyway.  Enough rambling.  Back to the story.

The man walks in and says, “I’m here to check your oven.”

He then walks over to the oven and turns the dial as if to turn it on.  Which is when I proceed to intervene.  “You know,” I say.  “Since you haven’t actually done anything to fix it, it’s still going to be broken, no matter how many times you check it.”

Statement of the obvious.  To you and I, perhaps. But not to mister handyman over here.

He turns.  Looks me square in the eyes.  And says, with an attitude that I can’t possibly do justice to over the internet.  “Well, what do you want me to do about it?”

Now.  There were many things I could have said to this.  Most of which involved him impaling himself on some rusty screws.

But what I actually said was, “If you don’t want me to call your manager and complain, then you’re going to get me a new oven.  And you’re going to do it by the end of the workday today.”

And that, my friends, is how I strong-armed my way to a fully functional kitchen. 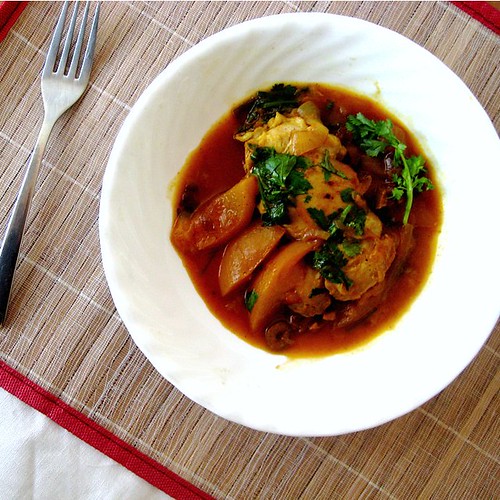 Now if I had really been on my game, I would have told him to throw in a few dining room sets.

Or a $125 gift certificate to CSN to use on anything in any of their stores.  No holds barred.

Or…I could just offer that to you guys!

Just leave a comment on this post by next Friday and you will be entered to win!  Unfortunately, CSN can only send this to those in the US and Canada but if you live in a different country you can certainly have it sent to someone you know in one of these countries!

Also, you have one day left to send me your entry to Regional Recipes: ETHIOPIA! 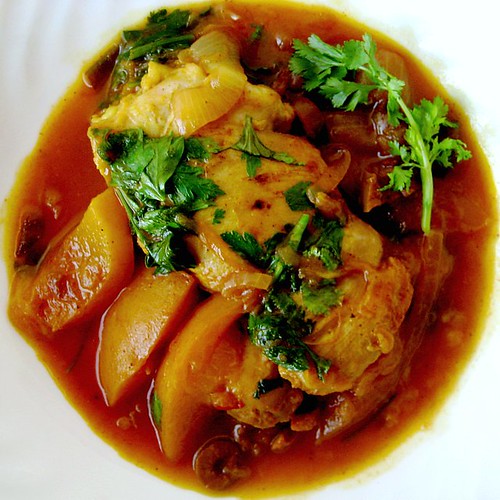 Speaking of the Middle Eastern food that my totally idealized romantic intrigue and I would spend many hours enjoying together.

When I discovered that plums were on sale this week at Whole Foods, I got a serious hankering to use them in something savory.  After a quick search through some of my favorite blogs, I came across this tagine over at Closet Cooking.  Yes, I know it’s essentially a stew and who wants to eat stew in 90 degrees heat.  But you know, when else are nectarines and plums going to be at their peak?

1. Heat the oil in a medium pan over medium heat.  Brown the chicken on all sides, then remove to a plate.

2. Heat the second tbsp of oil and cook the onions until just starting to brown. Add in the garlic and ginger and cook for 30 seconds or until fragrant.

4. Add in the chicken, harissa, lemon, honey, and olives.  Simmer, covered, for 25 minutes.

5. Mix in the parsley and cilantro and serve. 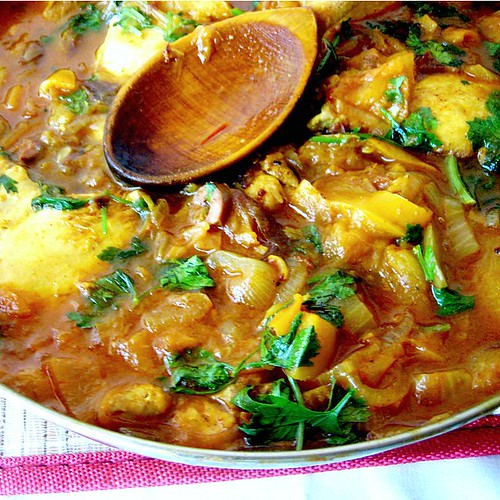 141 Responses to Moroccan Nectarine and Plum Chicken Tagine…And A Giveaway!