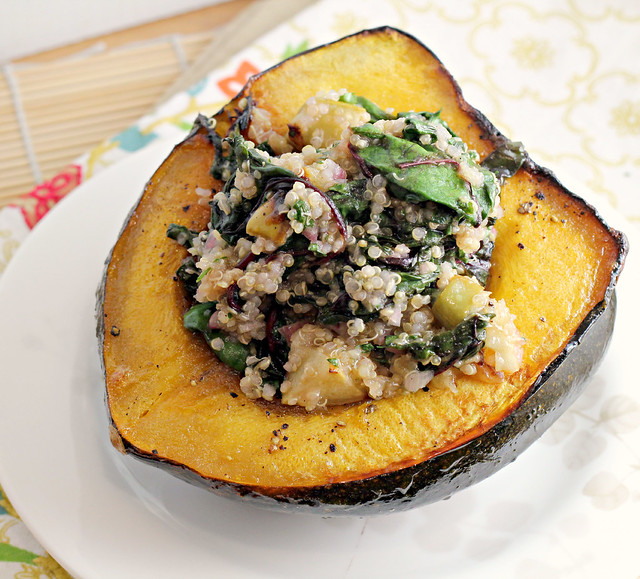 Social media has been telling me that I’m selfish for over a week now.

And the truth is that yes. Even in the wake of Hurricane Sandy, I wanted to run the NYC Marathon.  Yes, I was happy when, the Tuesday before, Mayor Bloomberg announced that it was still on.

And yes, I was devastated when, late Friday afternoon.  Approximately 36 hours before the race, as I headed into the expo to pick up my bib.  He announced that it was canceled.

Oh, the tears that flowed. 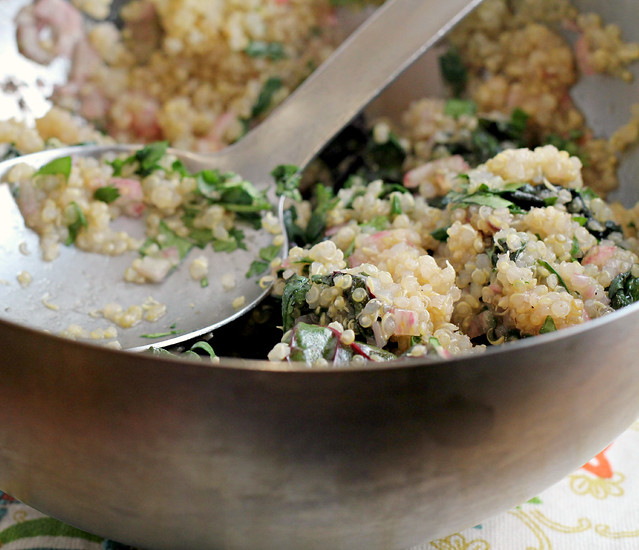 The marathon has always been an event that is meant to unite and inspire.  And I truly felt that by having it, we would be showing just how strong we are.  That even in the wake of something terrible, we could come together and do something amazing.

I have trained for this event like a crazy person.  I got up at 5AM every Saturday morning for the past five months to do a long run.  Went to the gym and lifted weights/did pilates/ellipticaled/biked every day.  Training for a marathon is not just a frivolous thing, you see. It’s a lifestyle.

It’s also a coping mechanism.  After everything that happened with my dad in September, the marathon was something that I could focus on.  A bright spot in an otherwise darkening world.  I’m not going to be able to celebrate or look forward to the holidays or my birthday or anything of that sort for a long time.  But this was something that I worked for and deserved to be proud of.  And I wanted it so bad.

It’s disturbing to think that the residents of Staten Island would rather make very real and serious threats to my life than have me achieve that. After all they’ve been through…that’s really where human nature has led them? (No offense if you’re from Staten Island, but really, regardless of Mayor Bloomberg’s decision – which I cannot control by the way – resorting to violence is never the right option. Ever.)

And if Mayor Bloomberg had decided on Tuesday to cancel the race, when the devastation was at it’s peak. I would have understood.  I would have been okay with it.  But to wait until the eleventh hour, the last possible second.  To get my hopes up and then rip them to shreds.  All out of fear that my fellow New Yorkers would find it more than appropriate to attack me, literally, for running?  Is disgusting.  And I will never be okay with it.

So here I am, all marathon-trained with nowhere to run.  Except not exactly.  I managed to get an entry to the Philadelphia Marathon in two weeks, on November 18th.

I’m an endurance runner after all.  And when the going gets tough…I find a way to run.  It’s just what I do.

**As an addendum, I just want to make it very very clear that while of course I was upset that the race was canceled, what got to me more was the threats of violence that were made against essentially innocent people that led to it.  There are ways to express your anger at an authority’s decision but saying that you will attempt to kill or harm anyone is NOT a valid one.  And that is really what I take most offense at and what I was most saddened by.  I am truly sorry for those who were affected severely by the storm, of whom I have some very close friends. I hope everyone is safe and will continue to be so and that we can all get through this. 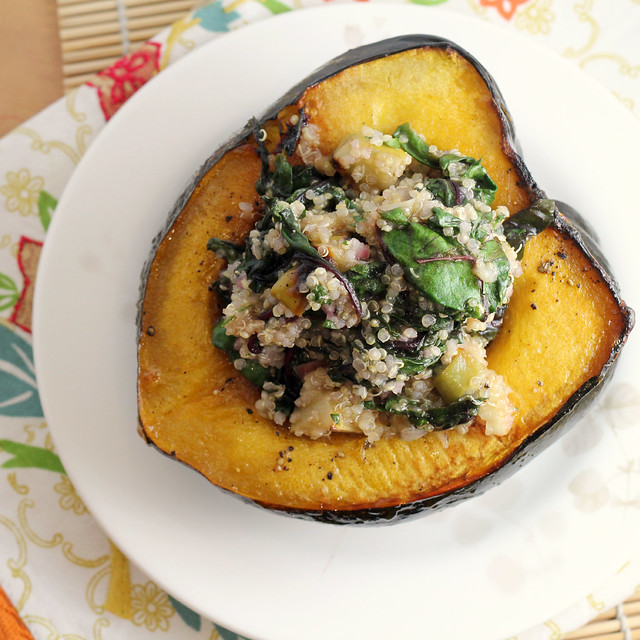 Let’s talk stuffed squash boats! I made and ate these while I was knee-deep in carb loading.  I mean, really…who can say no to a whole bowl of winter squash deliciousness!?  Especially when the squash IS the bowl.  Not I.

And then there’s the quinoa filling.  The.Boy. actually asked me yesterday whether quinoa is good for you.  I stared at him blank-eyed because, DUH, doesn’t everyone know of it’s superherofood status??? Apparently not.  Among many other things, quinoa has been shown to have anti-inflammatory properties which is just perfect for those of us tapering runners who are trying to get our muscles into as least of an injured state as possible before our race. And then there’s also the fact that it can help lower cholesterol and maintain HDL levels…and that it’s chock full of fiber and protein.  All good stuff.

So, right. The filling.  The quinoa is mixed with swiss chard, roasted apples and cilantro and then tossed with a lemony honey vinaigrette.  Pile it into the squash and – voila! Dinner is served.  Perfect whether you’re carb-loading or just want a totally delicious guilt-free, squash-infused meal.

Speaking of squash…it’s time for week TWO of the 12 Weeks of Winter Squash, which I’m hosting with Heather of Girlichef!

If you make any winter squash recipes from now until this coming Sunday, then be sure to link up!! 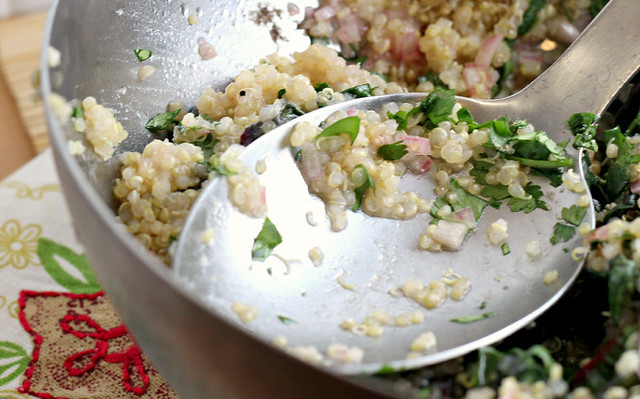 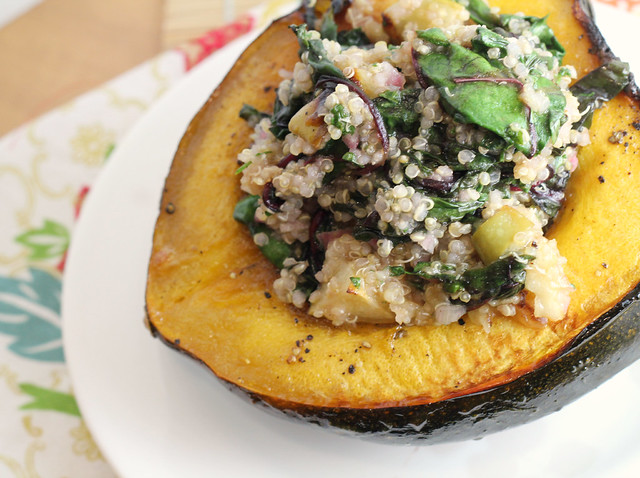