Cauliflower and A Book Review 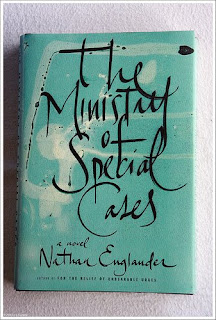 Every year, I make it a personal goal to try to read all of the fiction books on the New York Times 100 Notable Books List. Seeing as how this is 50+ books, I always fail. But occasionally, I come close. I was in the middle of The Ministry of Special Cases by Nathan Englander when the year turned, and I figured that reviewing it and anything else I read on my blog would be a good way of keeping track of all of the books I’d read and what they were about, since very often I look back at titles of the works I’ve completed and have little to no recollection of their content.
The Ministry of Special Cases is a novel about a Jewish family living in Argentina during the late 1970’s. At this point in time, Argentina is undergoing a period of political upheaval and strife such that individuals, especially Jewish ones, are being “disappeared” by the government for no apparent reason at all. The novel centers around a family of three – Kaddish, the father, Lillian, the mother, and Pato, the son. Lillian is the breadmaker of the family and her job as an insurance saleswoman is what keeps the family afloat. Kaddish is best described a schmuck (isn’t Yiddish so useful sometimes). Nothing he does ever turns out right and the little monetary contribution he has to his family’s welfare comes from a job he has undertaken in effacing Jewish graves; essentially, he hires himself out to those who wish to have their ancestry erased. Pato is a typical college student who, for the most part is a good kid, although he does get mixed up in drugs and rock and roll every once in a while. About midway through the story, Pato is disappeared by the Argentinean junta for no apparent reason other than that he is a student and owns books that could to some minds be viewed as controversial. The remainder of the novel details Lillian’s and Kaddish’s attempts to get their son back.
Although the book was entertaining, I found that I could not immerse myself in it as much as I wanted to. I think the problem lay in the character development. Lillian and Kaddish, although entertaining, were just not complex enough. They seemed very one-sided and always acted in a stereotypical manner. The book did have its moments, though, and so while I would not advise anyone to run to Borders and buy a copy, I would also not discourage anyone from taking it out of their local library on a whim. 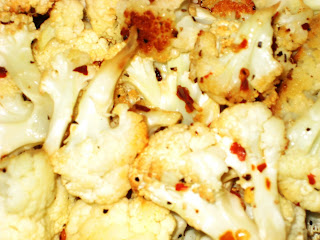 On a completely unrelated note, things around here have been pretty hectic lately. I have rehearsal every night from 6-10 until the show opens (Jan 28). That has left me in need of some quick and easy food. I made roasted cauliflower the other night as a side dish and it was FANTASTIC. Broccoli and cauliflower are two vegetables that take really well to roasting. Although the cauliflower I made wasn’t very complex, it had that good basic home-cooking feel to it. It will definitely be a staple weeknight recipe in my kitchen.
Roasted Cauliflower with Red Pepper Flakes
Serves 2
1 large head cauliflower
salt and pepper
1/2 tsp red pepper flakes
PAM
Spray the cauliflower with PAM and mix it with salt, pepper, and red pepper flakes to taste. Roast it in a 400 degree oven for 30 minutes, stirring once midway through.
You are reading this post on Eats Well With Others at https://joanne-eatswellwithothers.com. Excerpts and links may be used, provided that full and clear credit is given to the author and or owner of Eats Well With Others. All rights reserved by Joanne Bruno.

3 Responses to Cauliflower and A Book Review