Brown Rice with Lime, Cilantro, and Jalapeno Cauliflower and A Book Review 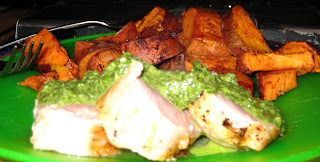 Yesterday morning I woke up to snow. Lots of it. There were a few inches already on the ground and it was still going strong when I left my room to go to the gym (which, thankfully is right across the street). Normally I am not such a huge fan of snow mainly because it gets slushy and dirty really quickly, but seeing as how it brought the temperatures from being in the teens to being in the thirties, I was grateful that it made an appearance. I think the warmth – isn’t it great how I consider the thirties to be warm – gave me the strength and stamina to run at the gym for 5.5 miles! This was especially great because I brought my running speed up to 7.6, a number that I haven’t seen in MONTHS. For those of you who don’t know, which is anyone reading this, I hurt my knee a few months back by doing two 6-mile runs outside in the span of a week. For some reason, running outside really messes with my knees in a way that the treadmill never has…I think it has something to do with the fact that the ground doesn’t bounce back the way that the treadmill does. Anyway, that was in early November, and since then I’ve barely been able to run at all, let alone reach my previous high of 8.5 mph. I’ve slowly been incorporating running back into my routine and yesterday was the first day I really felt good again so yay me!
In order to celebrate, I decided to make sweet potatoes which are one of my favorite vegetables (and also THE most nutrient dense vegetable known to man). In addition, I had some pork tenderloin in my fridge that was on salt this week which I thought I would make with a chimichurri sauce, since I had some leftover cilantro. Chimichurri sauce has also been on my list of thing

s to try so I thought, why not kill two birds with one stone. Since I had two four hour piano rehearsals yesterday for a show I’m playing for, I did a LOT of prep work in the morning, which included making the chimichurri sauce and cutting the sweet potatoes. Then, during the hour and a half I had in-between rehearsals, I managed to cook the meal AND eat…it was quite an evening of multi-tasking. The two recipes I chose to make – sweet potatoes with honey butter and pork tenderloin with chimichurri sauce – were both adapted from Tyler Florence recipes, and so I will be submitting these to Tyler Florence Fridays. In addition, since the chimichurri sauce is cilantro-based I will also be submitting it to Weekend Herb Blogging, which is being hosted this week by Chris of Mele Cotte. For those of you who don’t know, cilantro is an herb that is native to southwestern Asia and north Africa. It has often been used as a folk medicine to cure anxiety and insomnia. It also has an extremely high amount of vitamin A and lutein. These two recipes were DELICIOUS and are being put on a list of dishes that I would serve to other people. 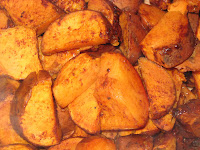 Sweet Potatoes with Honey Butter
Serves 4, adapted from Tyler Florence
3 lb sweet potato
2 tbsp honey
2 tsp cinnamon
salt and pepper
1) Preheat the oven to 400 degrees. (The original recipe said 375, but I was short on time).
2) Dice the sweet potatoes into cubes. Toss with honey, cinnamon, salt and pepper. Spray with PAM and bake for 30 minutes, tossing once halfway through.

Pork Tenderloin with Chimichurri Sauce
Serves 4, adapted from Tyler Florence
1 1/2 lb pork tenderloin
3 tbsp lime juice
1/4 cup olive oil
salt and pepper
1 bunch cilantro
1/2 bunch parsley
2 cloves garlic
1) Puree the lime juice, olive oil, salt, pepper, cilantro, and parsley in a food processor. (The original recipe just chopped all of the ingredients and mixed them together, but I figured this would be faster). Let mix in fridge for a few hours so flavors can meld.
2) Season the pork with salt and pepper. Cook on a grill until reaches desired doneness. For this, I used my George Foreman grill and it took about 15 minutes.
You are reading this post on Eats Well With Others at https://joanne-eatswellwithothers.com. Excerpts and links may be used, provided that full and clear credit is given to the author and or owner of Eats Well With Others. All rights reserved by Joanne Bruno.