A Taste of Mexico 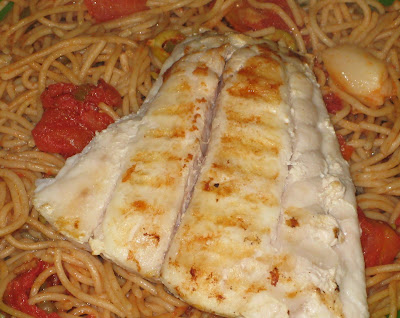 Even though we are poor(ish), starving (ha yeah right) college students, my roommate and I make it a point to go out to eat every weekend. We figure, you only get to live in Boston once and so we should take advantage of all of the great restaurant options that surround us. One of our favorite cuisines is Mexican food. However, my roommate is from Phoenix, AZ and so she is pretty darn picky about the Mexican food that she puts in her mouth. I guess it’s the same for me and pizza or cannolis…Boston’s just can’t measure up to even the worst versions you will find in New York, so why should I even bother? Anyway, we have found two places in Boston that are really good – Sol Azteca which is on Beacon Street near BU and Zocalo’s which is way out in Allston. The past two times we have gone to these places, I have had a dish called Huachinango Veracruzano, which is basically snapper sauteed in a tomato sauce of capers and green olives. The flavors tasted so fresh to me and melded really well, kind of like a Mexican version of a puttanesca sauce. It was a really light and refreshing dish, especially after the bowl of guacamole that we consumed as an appetizer, and especially considering the fact that most Mexican restaurants have a tendency to drown their entrees in cheese. I liked it so much that I decided to recreate it at home (with a little help from Bobby Flay)! After doing a bit of research, I discovered that is a dish that is traditionally served in coastal areas of Mexico, and so I am going to submit it to this month’s Regional Recipes, which is being hosted at Wandering Chopsticks. In addition, because I am a pasta addict, I thought that this sauce would be great over some spaghetti, so I am submitting it to Ruth for her Presto Pasta Nights!

1. Get the water boiling for your pasta.
2. Chop the garlic and onion and saute in the olive oil until the onions start to soften, about 3-5 minutes.
3. While this is going, cut the olives in to quarters and chop the pepper into very small pieces.
4. Add the wine to the pan and reduce it.
5. Add the tomatoes, green olives, capers, pepper, and sugar, and salt and pepper to taste. Bring to a boil, cooking until the sauce reaches the desired amount of thickness.
6. At this point the water should be boiling, so add in the pasta.
7. While all this was going on, I heated up my George Foreman grill, salt and peppered a snapper fillet and cooked it for four minutes. Then I removed the skin. Since I was only cooking for myself, I decided to grill the fillets fresh each night but if you are cooking for more people, I would imagine that you could also bake or saute all four of them at once, or grill them all at once.
8. Mix together the pasta and tomato sauce. Place a snapper fillet on top of each dish.

7 Responses to A Taste of Mexico