I’m Leaving on a Jet Plane What Do You Do When Life Hands You a Sack of Potatoes?

Meat and Potatoes: The Lenten Way 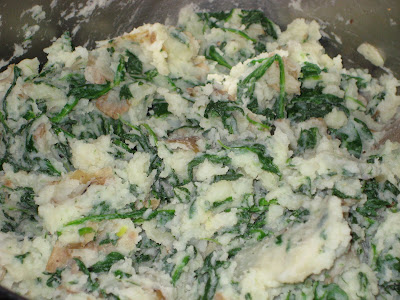 Greetings from the Big Apple! You will all be happy to know that I survived the first three days of being home. It was doubtful at first whether or not I would make it, and I will concede that there were some spotty patches along the way (most of which involved me proselytizing on the benefits of eating at least 5 servings of fruits and/or vegetables a day), but I like to think that now that the first leg is over it will be semi-smooth sailing from here.

So what have I been up to, you ask? Mainly cooking. And eating. And running. Is it really so different from what I do in Boston? I did 6.7 miles on Saturday and then on Sunday, I started a $20 trial membership at the local New York Sports Club. This gym was beautiful. I mean, gorgeous. Each cardio machine had its OWN tv. I think that I foresee myself starting up a real membership when I move back. It’s a bit pricy but I’m willing to cut costs elsewhere to avail myself of all of their equipment. I also made a trip to the Amish Market that was in the same shopping complex as the NYSC. Does anyone else out there swoon when entering a really great gourmet market? Or is it just me? I refrained from buying anything that wasn’t what I went in for (pre-baked polenta) but I plan on making a trip back for some essentials before I go back to Boston. They had tons of varieties of Italian whole wheat pasta, as well as faro, which I have been searching for. Also, many MANY varieties of bbq sauce. I see more pulled pork in my future.

As many of you may have guessed, I am Catholic. By birth. Personally, I am more agnostic than anything else. I disagree with many of the trappings and rules of the Roman Catholic religion, and I can’t really say that I believe that Jesus actually rose from the dead, but I do believe that there is some higher power out there. You can agree, disagree, have no opinion…so be it. It is also my contention that, if there is a god, he (or she) is going to evaluate a person based on their morality and inherent “goodness” and not on what specific religion he adhered to, so to each his own. My parents, though mostly lapsed, still follow some of the conventions of Catholicism. My mother insists on getting ashes on Ash Wednesday, for instance. She doesn’t go to church any other day of the year, but you better believe that she will be making an appearance on that day in February. She thinks it will save her soul for the rest of the year. Or something like that. For some reason, my parents are also very serious about sticking to the no meat on Fridays thing this year, so it was my job to come up with either a fish or vegetarian dish for Friday’s dinner. As I believe I’ve mentioned before, my father and brother are meat and potatoes kinds of guys. They like their animal protein source along with some carb, so to satisfy their cravings I decided to make a simple fish dish along with some mashed potatoes. The fish was good, not amazing. I really liked the way that the bread crumbs kind-of melted into the top as the fish baked. The mashed potatoes were the real hit though. They were based off a Rachael Ray recipe that I had been planning to make for a while but never got around to. All-in-all a pretty well balanced meal.

Baked Flounder with Tomatoes and Bread Crumbs
Serves 4, adapted from the Food Network 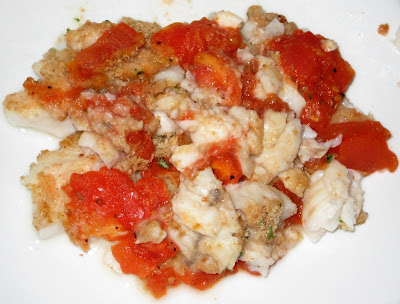 1. Preheat oven to 350. Bring a pot of water to a boil. Score the tomatoes and blanch for 1 minute. Rinse with cold water and then peel. Remove the seeds from the tomatoes and chop up the meat.

2. In a non-stick skillet, heat the olive oil. Saute the garlic for 30 seconds and then add the tomatoes for a few minutes.

3. Spray a baking pan with cooking spray. Place the flounder fillets in the pan. Salt and pepper them. Sprinkle with breadcrumbs so that they are completely covered and top with tomatoes. Bake for 10 minutes.

3 lb potatoes, cubed
1 lb baby spinach
4 tbsp butter (I used light butter)
4 cloves garlic
1/2 cup half and half
salt and pepper to taste
(the original recipe also called for nutmeg, which my father doesn’t like so I excluded it although I bet it would have added a nice nuttiness)

1. Place potatoes in a pot and cover with water. Salt the water and bring to a boil. Cook until potatoes are fork-tender.

2. While potatoes are cooking, spray a saute pan with some cooking spray. Add the spinach in increments and cook until all is wilted. Remove to a dish and, when cool, squeeze out the excess water.

3. When potatoes are ready, strain them and set them aside. In the same pot, melt the butter. Add the garlic, minced, and cook for 2 minutes on low heat. Add in the half and half and spinach. Mix in the potatoes and mash to desired consistency. Salt and pepper them to taste.

8 Responses to Meat and Potatoes: The Lenten Way