Polenta Gratin with Spinach and Mushrooms 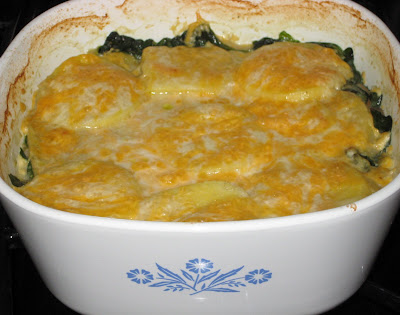 For the record, my father found the passports. He discovered that he hid them in the attic, of all places. Thankfully, this occurred before I went to the post office to request a new one. And can you guess what was sitting next to them? You got it – my birth certificate. That’s right people; I have officially been born. Times two.

You should all know that I am officially recipe-backlogged. Majorly. But it’s probably for the best since I will be away again this coming weekend to go to Cornell’s revisit weekend. In fact, with all of the recipes stored up, you may not even notice that I’m gone ;). I am officially back in Boston, however, and am kind of glad to be home. I missed my bed. And the city. And my autonomy.

I really did have a lot of fun this vacation, though. Some highlights: seeing Jane Fonda and Colin Hanks (Tom Hanks’s son) in the play 39 Variations, proving to myself that I can do three 6.7 mile runs in a week without my knee hurting, making gnocchi and whole wheat pizza dough (more on that later this week) from scratch, discovering new york sports club is the best gym ever (they have a tv attached to EVERY machine!), the best lunch of my life with my dad at Harry’s, eating loads of sweet potatoes and a carton of Edy’s Slow Churned Take the Cake ice cream, waching the third season of Big Love, spending some time with my grandmother (always a character, albeit a senile one), and of course catching up on some much needed sleep. All in all a pretty good break, don’t you think!

Now I have some shocking news for you – previous to my making the polenta side dish shown above, my parents had never had polenta. When I told them I was making it, they reminded me that they were southern, not northern Italians. To which I responded, “You eat frozen Healthy Choice dinners – you’re not Italian at all”. They didn’t like that very much. But they DID like the gratin, so maybe that redeems them, if only a tad bit.

Polenta Gratin with Spinach and Mushrooms
Serves 6, adapted from Food and Wine

Preheat the oven to 350. Heat the olive oil in a non-stick skillet and saute the mushrooms over high heat, until slightly browned (about six minutes). Add the shallot and cook on low heat for 3 minutes. Add in the spinach until all of it is wilted (I had to add it a handful at a time because my pan was getting full). Season with salt and pepper. Spread into a casserole dish.

In a small saucepan, melt the butter. Whisk in the flour. Add the stock and cream and whisk until thickened. Season wih salt and pepper and pour over the spinach.

Slice the polenta into thin circles and arrange over the top of the mixture. Sprinkle the cheese on top. Cover with aluminum foil and bake for 40 minutes. Remove the foil and broil and until the cheese is browned.

4 Responses to Polenta Gratin with Spinach and Mushrooms