Pork Stir-Fry with Ginger and Hoisin Sauce Fall Into Spring 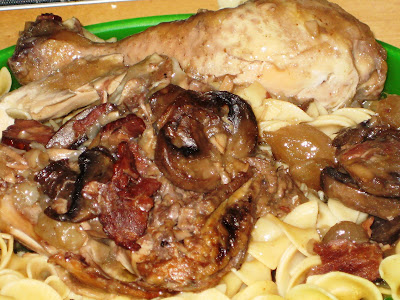 When I started to read Anthony Bourdain’s Kitchen Confidential, which is a memoir of sorts about Bourdain’s rise to chefdom, I didn’t know much about him. Sure, I knew he was the head chef of a restaurant in New York, that he cooked mostly French cuisine, and that the book was to some degree an expose` on what really goes on behind the closed doors of the food industry. But I learned all that from reading the back cover (and also from looking at the menu of Les Halles on menupages.com). Never could I have imagined how taken in I would become by his descriptions of restaurant life. He made me want to be a chef, with callouses on my fingers (battle scars), sweaty, dirty and covered with a whole range of food particles after a long day on the line. Now most people would read that and go, “Ugh, not for me”, but he described it with such matter-of-fact pride and reverence that I wanted to be that person just to win his respect. Not to mention the fact that he started out as an average college kid with no intentions of entering the world of food (with no intentions of living past age 25, as it were). As I was reading, I kept thinking I could do this. But then I remembered that whole medical school thing and though, maybe after I retire.

One of the things I admired most about Bourdain while reading this book was his refusal to conform either his food or his mentality to any kind of social standards. He said what he wanted to say no matter how ugly, perverse, or inflammatory it was, just like he cooks what he wants to cook and then leaves it to the masses to decide whether or not they want to eat it (coincidentally, they usually do, unless they’re vegetarian in which case they’re shit outta luck). He’s gutsy and I gotta say, I like that in a man.

When decided what to cook as a dedication to him, I decided to go with some classical French cuisine, as this is the type of food that first drew him into the culinary industry. As I mentioned before, I looked at the menu of Les Halles and looked at recipes for some traditional dishes that I would be able to make with my limited supplies/space. In the end, I thought I would go with coq au vin, a French fricassee of rooster (in this case chicken) cooked with wine, bacon, mushrooms, and garlic. In typical “me” fashion, I modified it a bit and made it in the crockpot in order to save myself some time and energy. I also used turkey bacon instead of regular bacon. Bourdain would have hated that, but I think he would also respect my unwillingness to compromise my integrity, and so I don’t apologize for it. And you know what. It tasted damn good. 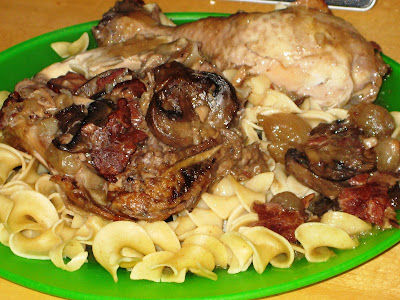 1. Fry the bacon until crisp. In the same pan, brown the leg quarters. Sprinkle with salt and pepper.

2. In a crockpot, add the pearl onions, mushrooms, and chopped garlic. Next, add the chicken, bacon, and any drippings left over from the skillet. Add in the rest of the ingredients except for the wine.

4. I ended up removing the chicken, stirring in some cornstarch dissolved in water and thickening the sauce on high for a bit.

5. Boil some water for noodles and serve with the chicken and mushroom sauce. 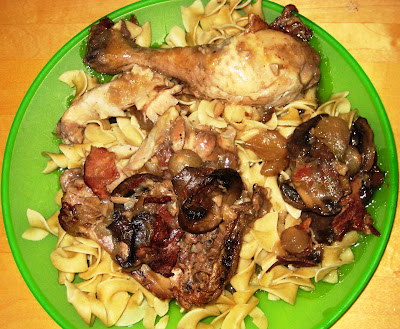