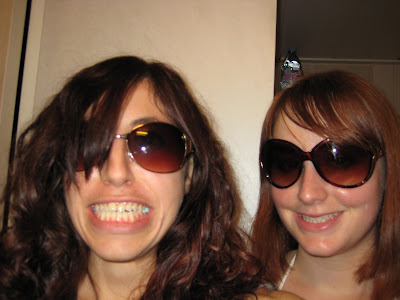 Yes, it is true. I am back. The trip was absolutely amazing! Everything was just so beautiful and so much fun and so relaxing. Tiffany and I almost stowed ourselves away on the boat to continue on to wherever its next destination is, but didn’t. We figured our parents would be pretty angry if we didn’t graduate.

If anyone is thinking of going on a cruise in the near future, I highly recommend Norwegian. For many reasons. First off the food. They have this freestyle dining policy where you can eat as much or as little as you want, whenever you want. There are two buffets and two restaurants that are entirely free of charge. Then there are three fancier restaurants (a French place, an Italian place, and a steak place) at which you pay a cover fee (10 dollars) but again can eat however much you want for that fee. The roomie and I ate at the buffets for breakfast and lunch. I kept it pretty healthy most of the time but still indulged – oatmeal with tons of dried fruit mix-ins for breakfast, a small amount of meat and tons of veggies for lunch (they had a sweet potato/butternut squash/pecan casserole one day – I was in heaven). Then, we ate at the free dinner restaurants most nights and went to the French place for a high class meal one night. The cruise company had a deal with cooking light so all of the restaurant’s recipes were from cooking light! The portions were very normal sized, probably even less than what I usually have for dinner and so I never felt stuffed and also didn’t feel guilty about having dessert every night! It was my vacation, I HAD to live it up. The best dinner was the French dinner though. I got a salad with roquefort, pancetta, and walnuts to start. Followed by roasted rack of lamb with cherry tomatoes and artichokes, and the best creme brulee ever for dessert. It was amazing! 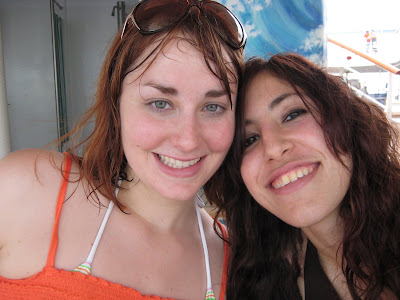 Then we have the excursions. Tiffany and I kayaked on the first full day in Freeport. The kayaking extravaganza lasted for 90 minutes and led us through a forest of mangroves! The tour ended with a light lunch of sandwiches and landed us on a private and secluded beach where we relaxed for a while before heading back to the boat. The water was so clear and beautiful, and the perfect temperature.
The second day was spent in Nassau. Tiffany and I went snorkeling over a coral reef. It was so weird to see fish swimming just a foot below me! They were so many different colors and absolutely beautiful. It was all entirely breathtaking. Then, we walked around Nassau for a bit, where I picked up some local rum for my brother, and Bahamian spices and coffee for myself. (I’m a typical foodie what can I say).
On the third day we got to go to a private island owned by the cruise company! We spent most of this day laying on the beach but also ended up going for a two mile hike to the island’s lighthouse. We had gotten up pretty late this morning due to some partying the night before, so we kept it pretty low-key. 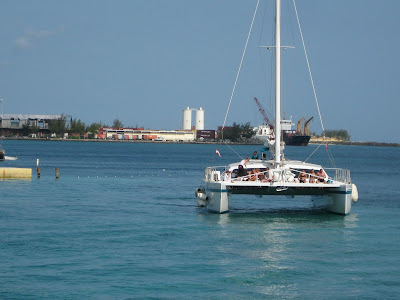 Finally, the nightlife. There was party every night on board but we kept it low-key drinking wise until Wednesday night. We started out the evening with Pub Crawl, which consisted of going to five different bars with a group of people to try five different drinks. I don’t know if I’ve mentioned this before but I am pretty small and so I can’t really hold too many drinks. Three of these drinks were pretty low-alcohol content (at least I think so) but two were basically pure shots. Pub crawl ended with us playing flip cup with the other crawlers. We ended up making some friends on pub crawl who we danced the night away with. After pub crawl, we decided we still weren’t feeling the alcohol and so preceded to have another drink. THEN, as if this wasn’t enough, one of the guys who we’d just met ordered a round of vanilla vodka for all of us. And that my friends was the shot that pushed me over the edge. The night was absolutely amazing though and completely absurd, filled with tons of laughs and ridiculousness. It definitely made my trip. Even though it didn’t end as well as it began. Shockingly, however, I woke up the next morning feeling fine! As we hit the breakfast buffet, I was dancing to the songs that were playing in the background and Tiffany said, in shock, “Are you dancing? You are possibly the best hungover person I have ever met!” 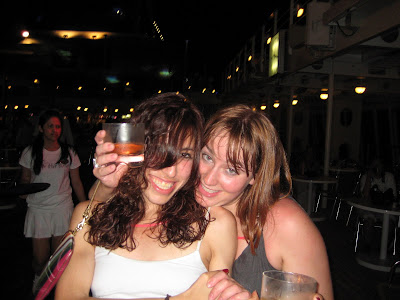 Anyway, now we are back in Boston and even though I will NOT be drinking for a while, we are quite ready to party it up with our friends for Senior Week before graduation on Friday. I can’t believe that in a week I will be leaving this place. Especially Tiffany. We have been roommates for three years now and I have spent close to 24 hours a day with her, almost every day. How I will be able to live without her when she moves to San Francisco, I do not know. But I’m not going to think about that now. I’ll worry about it on Saturday.
All in all, this was the best vacation I have EVER had.
When we got back from our zillion hour plane rides last night, we were both starving and so I whipped up some grilled cheese sandwiches! But not just any grilled cheese. This was grilled cheese with artichoke hearts and red bell peppers. So delicious and just the kind of simple dinner I needed after so many nights of decadence. The sandwich is pretty easy to throw together – between two slices of bread, place some provolone, sliced bell pepper and artichoke hearts. Toast on the George Foreman grill (or a panini press or broiler).
I am submitting this to Deb of Kahakai Kitchen for Souper Sundays!

Now I am off for a run. I gotta take advantage of the Charles while I still have it. 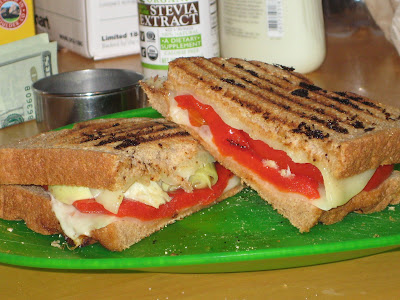 Also, thanks to everyone for your sweet comments about my race. They were much appreciated!