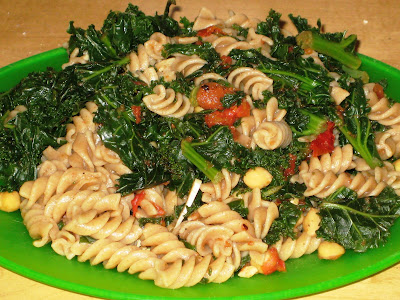 Today marks my last day of school. Ever. As a college student. Ignoring the fact that I have 8+ years more to go, it feels kind of liberating. Ever since I can remember, going to and graduating from college was what I worked towards. It was THE ultimate goal. And now, with just one paper and two finals left to go, I will have completed it. There will be MUCH champagne-drinking tonight, let me tell you (as soon as I finish the last paragraph of my paper). My roomie and I stole some Andre` from that formal we attended a few weeks ago and it is sitting in the fridge as we speak.

When I first started cooking, I made very simple dishes that consisted mostly, to be honest, of veggies and pasta. Keep in mind I was in super-diet mode at the time so this made sense. Then, once I reached my goal weight and started maintaining, I begin to incorporate more intense dishes into my repertoire (i.e. gorgonzola cream sauce) while still keeping up the theme of including tons of veggies, of course! However, there is just something about the warm summer weather that calls for a lighter pasta dish, filled with fresh flavors. I had bookmarked a recipe a while ago from Happy Herbivore for Indian-Spiced Chickpeas and Kale that I thought would go great over pasta. Plus, it helped that kale was on sale this week. Kale is one of those superfoods that you’re probably not eating. I had never heard of it a year and a half ago and, admittedly, I haven’t had it in a while but it is definitely a good thing. Kind of like spinach, but tougher and heartier. It’s the muscleman of the leafy greens. There’s no messing with kale.

My opinion about this pasta dish: it was good in that simple, light-hearted kind of way. If I made it again, I would probably double the tomatoes because they end up soaking up most of the Indian spices, and really you can never have too much of those. Also, I used bionaturae’s organic pasta (after reading Omnivore’s Dilemma, I’ve been trying to go organic and/or local whenever possible) and it was incredibly good. I liked that it had only one ingredient. I’ve been looking a lot at ingredient labels lately and if I can’t picture the ingredients in my head (and I’ve taken organic chemistry so I can picture a good many more than the average shopper) then it is NOT going in my shopping cart. Not that I want to get all heavy/controversial/political on you, but I will concede that if I could afford to eat all grass-fed meat and local/organic veggies then I would.

In the meantime, there’s always pasta. 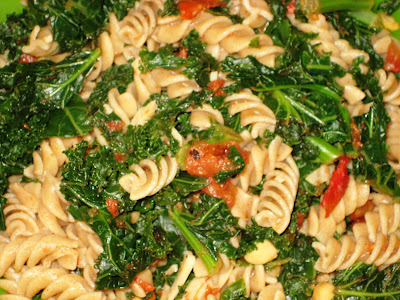 Set up the water for pasta. In a separate pan, steam the kale for about 20 minutes (I’m telling you kale is TOUGH) or until dark green and wilted.

In yet ANOTHER pan, saute the tomatoes and garlic for about 5 minutes. Add in the various spices and chickpeas and cook on low heat, mostly just to keep warm until the pasta is done and the kale is cooked but also so that the flavors can meld. When the kale is done, add it in.

Mix with the pasta and serve with some parmesan cheese, if desired. Now how’s THAT for a 30 minute meal!

I am submitting this to Presto Pasta Nights, which is being hosted this week by Patsy of Family, Friends, and Food. 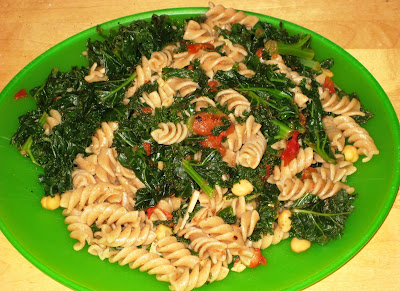 15 Responses to The Countdown Begins