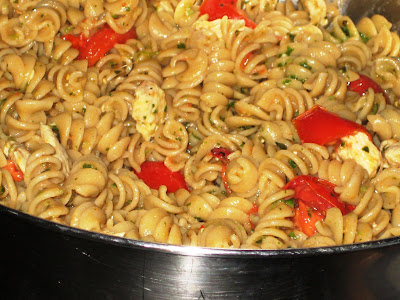 I thought yesterday was going to start off like any other day. I started setting up for breakfast, got the coffee going, and turned on my laptop. The hp screen popped up and then an unusual black screen popped up saying that windows hadn’t shut down correctly blah blah blah. Probably true since I had unplugged it without shutting it down the night before. No problem, I chose to start windows normally and moved on. The Windows XP screen pops up, thinks for a while. Pauses. Then I am confronted with none other than the BLUE SCREEN OF DEATH. It wasn’t entirely blue – there was white writing that disappeared too quickly for me to read, and then the whole process started again. After trying a whole variety of start-up options, I gave up.

Now you should all know that my laptop is (was?) four years old. So this day was really a long time in the making and I kind of knew it was coming. In fact, my brother and I had been discussing ordering me a new one. I thought that my laptop and I had an understanding, however, an unspoken agreement that it would not give out until the new computer arrived. And now that it has broken that trust, severed it forever, I feel orphaned, abandoned and alone. I am also currently going through the various stages of mourning. I am still in denial, believing that tonight when he gets home from work, my brother will work some magic on it and somehow resuscitate it from the depths of blue screen hell. And when (IF I tell you IF) that doesn’t happen, I am prepared and even looking forward to moving on to anger, bargaining and depression. We ordered the new computer last night and it won’t be made until June 25th. The day that it arrives, I will probably enter the acceptance phase. Until then, all bets are off.

My brother has agreed to let me use his laptop during the day, since he is at work anyway. We had a fun night last night, my computer issues notwithstanding. We went out for Cuban food (I got mango-glazed salmon and fried sweet plantains – my favorite) and then saw Third Eye Blind in concert. They are my absolute favorite band of all time. It was nice to be able to go out with my brother, have some good conversation with him at dinner, and then have a fun night out. It reminded me of how much I love that kid.

::Sigh:: Anyway at the Farmer’s Market this weekend, I was accosted by a strange new vegetable – garlic scapes! Garlic scapes are the flower stems that garlic plants produce before the bulbs mature. They are often removed by growers to produce garlic with bigger bulbs and are rumored to have a more mild flavor than garlic. After a google search, I came across many uses for scapes in frittatas, but by and large they are most commonly used in pestos. Not one to mess with a good thing, I found a recipe on a blog that I used to love to read but has now become defunct – The Savory Notebook. I decided to combine the pesto with pasta (obviously), as well as a jar of roasted red peppers and some cherry tomatoes that we had sitting on the counter. I also HAD to include chicken for the carnivores. The dish wentover really well and the pesto did have a distinct garlicky taste to it. I have also used the leftover pesto on grilled cheese – very good. 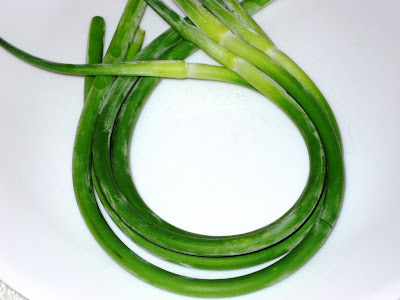 1. Combine everything in a food processor except for olive oil and pulse until smooth. Add the olive oil in a tablespoon-ful at a time until it reaches desired consistency. I ended up using about 6 tbsp instead of the whole 1/4 cup. Add in the white wine and process. Add salt and pepper to taste.

1. Start heating up the water for the pasta. At the same time, salt and pepper the chicken and saute until cooked through. Set aside with the tomatoes and peppers. 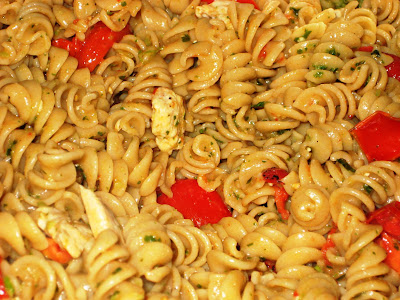 I am submitting this to Presto Pasta Nights which is being hosted this week by Daphne of More Than Words.

12 Responses to The Great Scape