Battle of the Bluebs The Great Scape 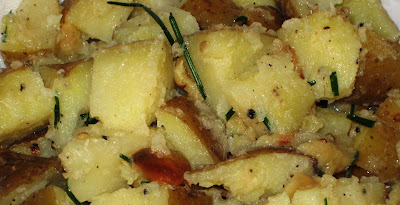 Don’t get me wrong, I like barbecue as much as the next girl. (Unless of course the next girl is from Texas or any other southern state. In which case, I probably don’t like barbecue as much as she does.) But I like the side dishes that come along with barbecue infinitely more. This isn’t even specific to barbecue, however. Even in restaurants, I tend to order entrees less because of the main feature and more because of the things it comes with. To me, it’s more important that I get the dish with the butternut squash casserole or the caramelized eggplant than it is that I get the salmon over the snapper. That’s probably a very strange way to order meals but I guess my mind works in strange and unusual ways.

So on the one night this weekend that it didn’t rain, we decided to throw together some burgers. I had bought some ground turkey from Trader Joe’s in preparation for this, combined them with some salsa verde, chili powder, cumin, and onion and handed them off to my dad for grilling. Then I set to the sides. First off: the potato salad.

I have made many potato salads in my day since my dad absolutely loves them. Very few of them have contained mayo. This is the best one to date. It mixes a roasted garlic olive oil-based dressing with some cut up chives and yukon gold potatoes, a combination which is absolutely delicious. What makes it even better is that I got the chives from the farmer’s market this weekend – go me for supporting local produce. I got this recipe from Sunset magazine (via myrecipes.com). Make this. Soon.

1. Preheat oven to 400. Cut garlic heads in half cross-wise and wrap tightly in tin foil. Bake until garlic is very soft and golden (45-60 minutes). When garlic is cool enough to handle, squeeze cloves into a small bowl. Add olive oil, wine, 1 1/2 tsp salt, and 1/2 tsp black pepper. Mash with a fork until the texture is smooth.

2. Combine potatoes with water. Bring to a boil and then simmer until potatoes are tender. Drain and return to pan.

3. Add garlic mixture and chives to the potatoes. Let cool and then serve. 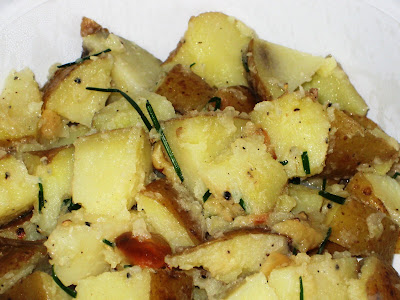 Next up we have our second bbq side: the slaw. I’ll be honest with you. I have never made slaw before. My mom has made cole slaw many times by mixing a bag of premixed cabbage/carrots/etc with some mayo and vineger but I’ve never really liked mayo so I’ve never had anything to do with it. Then I saw this recipe for spicy cilantro peanut slaw on Kalyn’s Kitchen and I knew I had to make it – it has some of my favorite things – cilantro AND peanuts. I was actually surprised at how well the dressing for this came together and even MORE surprised at how much my dad liked it. I would use this dressing again for just a regular salad and could see it being good with asparagus and broccoli.

Spicy Cilantro Peanut Slaw
Serves 6, adapted from Kalyn’s Kitchen
1/2 head green cabbage
1/2 cup peanuts, chopped
1/2 cup scallions
1/2 cup cilantro
2 tbsp rice vinegar
1 tbsp agave nectar
2 tsp sesame oil
2 tsp reduced sodium soy sauce
1 tsp sriracha
1/4 cup olive oil
salt and pepper to taste
1. Cut cabbage head in half and save one half for another salad. Slice the cabbage very thinly and then chop those slices into very small pieces. My mom was amazed at how small I got the pieces to be. I attribute it to using her good cutting knife which I have already told her I’m taking with me when I move to Manhattan. Thinly slice green onions, chop cilantro and chop peanuts.
2. In a bowl, mix together the liquid ingredients for the dressing until well combined.
3. Gently combine all ingredients in a large glass bowl – the solids first and then the liquids. Toss until the everything is coated. 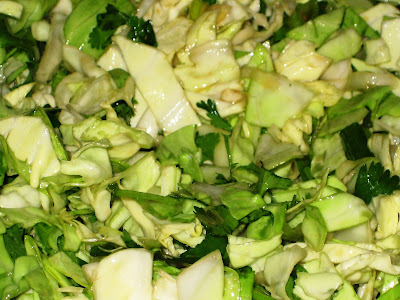 I am submitting this to Weekend Herb Blogging which is being hosted this week by Graziana of Erbe in Cucina.
Also, on a slightly clerical note, I just found out that I won the Barbecue Bible T-Shirt Giveaway from the Foodie Blogroll! If you are a food blogger who HASN’T joined the foodie blogroll – what are you waiting for?!?!?
You are reading this post on Eats Well With Others at https://joanne-eatswellwithothers.com. Excerpts and links may be used, provided that full and clear credit is given to the author and or owner of Eats Well With Others. All rights reserved by Joanne Bruno.

14 Responses to Slaws and Potato Salads