Cook The Books – The Last Chinese Chef, and How Drinking Cures Cancer! THIS JUST IN. Consuming large amounts of alcohol WHILE singing karaoke cures cancer. But only when you do the two this Thursday from 9-11 pm at For Pete’s Sake, a bar on 70th Street between 1st Avenue and York Avenue in NYC. I will be holding a happy hour there to raise money for the Leukemia and Lymphoma Society (and so that I can run in the Nike Women’s Marathon). A ten dollar entrance fee will get you a wristband as well as reduced price beers, shots, and margaritas. Plus Thursday is karaoke night, which I can tell you from experience is a TON of fun! If you’re in the NYC area PLEASE come by and tell your friends. It is definitely going to be a good time.

I am now going to abruptly change topics.

The Last Chinese Chef by Nicole Mones is a about a newly widowed woman, Maggie McElroy who is a food critic. Maggie and her late husband had what she thought was a good, albeit unique relationship, while he was still alive; both of them traveled a lot for work and so it was rare that they were ever in the same place for more than a few days at a time. But this seemed to work for them…kind of an absence makes the heart grow fonder kind of deal. After her husband’s death, however, Maggie receives word from another lawyer in his company that a woman in China, where Matt often went on business trips, has filed a paternity claim against him. It seems that she has given birth to his child and, not knowing of his death, is suing him for child support. Maggie decides to leave the US for China in order to obtain the child’s DNA for a paternity test. While going, she also takes on an assignment – to do a profile of a Chinese-American-Jewish chef named Sam Liang who is opening up a restaurant in China. Sam is infamous for his adherence to classic Chinese culinary practices and is also bent on translating his grandfather’s treatise on cooking, The Last Chinese Chef, into English.

Even though Sam’s restaurant opening gets canceled, Maggie decides to keep on with the assignment, instead choosing to write about a competition he is taking part in. Sam is auditioning to be on the national cooking team for the 2008 games in Beijing. As such, he has to prepare a huge multi-course meal, all in the style of traditional Chinese cooking. Throughout the novel, Sam gives his insight into Chinese cooking, which emphasizes textural and deceptive elements as much as it does taste. Eating for the Chinese is a completely sensual experience, stimulating both the mind and soul.

I have to say that I liked the foodie passages in this book more than the actual plot itself. I enjoyed reading about Sam’s endeavors in the kitchen as well as his description of the theory behind traditional Chinese meals. There are so many aspects to take into consideration that no food is ever as simple as it appears…there are suprises behind every bite.

That being said I had a very difficult time deciding what to cook for this event. What I really wanted to do was to make one of the vegetarian ducks that Sam describes; these look so much like real duck that the taster is shocked when he bites into it only to discover that it does not contain a shred of meat. However, that seemed like a bit too much of an undertaking. As I went through the book, I earmarked every page in which is a dish was described and made a list when I finished of all of the potential options. One recipe that I kept coming back to was one for a local dish of shredded pork in piquant sauce that was served in a tofu wrapper. After some googling around, I came across a recipe for Mandarin Shredded Pork and Sweet Bean Sauce. This seemed piquant to me!

Sweet bean paste is commonly used in Chinese desserts. It is made of mashed adzuki beans and sugar. What I liked about this dish was that one looks at it expecting it to be savory and then bites into it, only to be met with a delicious and unprecedented sweetness. The pairing of the red bean paste, which is almost always associated with desserts, with the pork is one of those suprises that Sam talks a lot about in the book. I also decided to put this over pasta because, well, I like pasta. All in all, an excellent read accompanied by some excellent food!

I am submitting this to Cook The Books as well as to Presto Pasta Nights, which is being hosted this week by the creator herself, Ruth, of Once Upon A Feast. 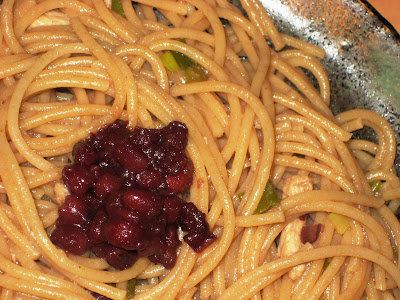 1. Mix together the ingredients from soy sauce through cornstarch. Cut the pork cutlets into matchstick sized pieces and marinate for at least 30 minutes.

2. Set up the water for the pasta. Mix together the red bean paste, rice wine, soy sauce, and sugar.

3. In a large pan, heat the olive oil. Add the pork and its marinade, stir-frying until browned, about 2 minutes. Add in the sweet bean sauce and the sliced green onions. Cook until slightly thickened.

4. Mix the pork in with the pasta when it is done cooking. Top with a large dollop of red bean paste. 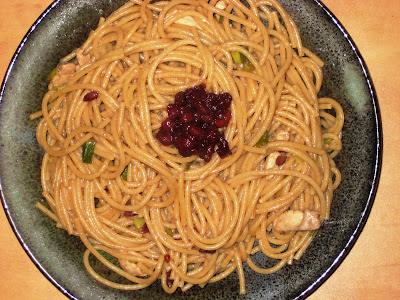 20 Responses to Cook The Books – The Last Chinese Chef, and How Drinking Cures Cancer!