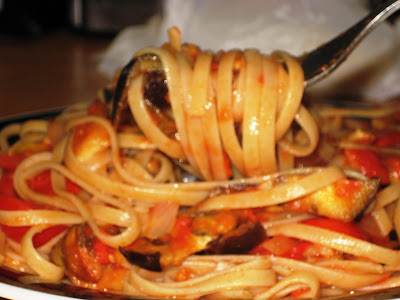 Have you ever heard the story about the princess and the eggplant?

Well then today is your lucky day.

Once upon a time in a land far, far away there was a princess whose father’s kingdom was built on oil. Now this was before the time of the industrial revolution and such, and so by “oil” I don’t mean high-octane diesel fuel. No, back then they were concerned only with the good stuff – olive oil.

The princess was getting to be in her late teens and so her father decided it was time to marry her off. He found an eligible bachelor living in a neighboring kingdom, offered up a dowry of a few hundreds of gallons of olive oil, and sent his daughter off to start her new life.

On her first night with her new husband, the princess was a little nervous, and so like most of us foodies do under such strenuous circumstances, she turned to the kitchen. Seeing as how eggplant was a staple of the region, and the princess was hellbent on cooking only with organic and locally grown produce, she decided to wow her husband with one of the many eggplant dishes in her repertoire.

That night, the princess was filled with nervous anticipation as her husband took his first bite. She needn’t have feared however, because he loved it. Hands down, absolutely loved it. He loved it so much in fact that he ate all of it, leaving no leftovers at all whatsoever and barely even saving any for the princess herself to have. When he finally came up for a breath of fresh air (i.e. when all of the dishes had been licked clean), he demanded that she make the dish again the next night.

The princess looked at him in fear. “I can’t,” she said.

“What do you mean you can’t?” the husband asked suspiciously, one eyebrow arched and ready for attack.

“There’s no more oil left. I used all of the hundreds of gallons of it. It just absorbs so much…”

And then the prince got so angry that he ordered her to be guillotined on the spot. Either that or he was a nice, forgiving husband and sent her off to bed with a kiss on the cheek. But I can’t remember which.

The point is that eggplant DOES absorb a lot of olive oil so be careful. It’s a very sneaky vegetable. 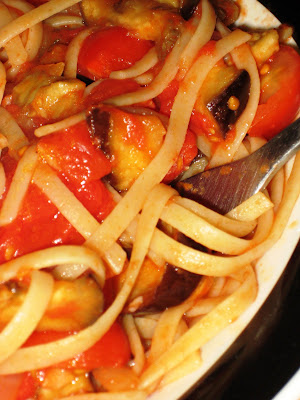 1. Preheat the oven to 425. Cut the eggplants into large dice and place in a bowl. Mix together with the garlic and spray with cooking spray. Arrange on a baking sheet and roast 20 minutes or until eggplant is tender.

2. Set up the water for the pasta and cook per the package instructions.

3. Heat the oil in a large saucepan. Add the onion (chopped) and garlic (minced) and cook until onion is translucent, about 5 minutes. Add the tomatoes, crushing them with your hand to break them up. Add the basil and season with salt and pepper. Cook until the sauce is reduced and thickened, about 10 minutes.

4. Put the tomato sauce in a bowl and mix in the drained linguine, eggplant, cherry tomatoes, and parmesan cheese. Serve with extra cheese.

This dinner was very simple and was one of those comforting meals that feels so welcoming after a long day of school and/or work. It is also really good topped with feta cheese. Especially if you’re like me and just happen to have some lying around.

I am submitting this to Tyler Florence Fridays as well as Presto Pasta Nights which is being hosted by Ruth of Once Upon A Feast. 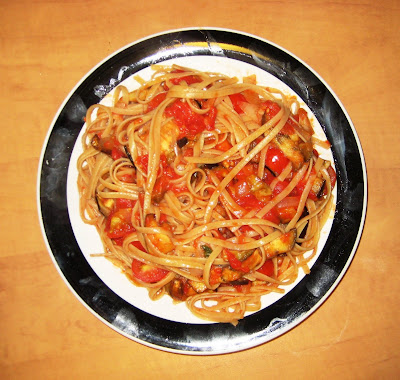 28 Responses to Linguine with Roasted Eggplant and Cherry Tomatoes