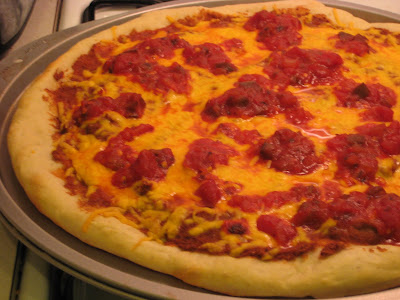 I grew up on homemade pizza. Every Friday night was pizza night and more often than not my dad would make pizza in lieu of ordering take-out.

I think the tradition originally started during Lent, when the only vegetarian thing my mom could think of to feed us was pizza. You see, we were not really into veggies back then.

What I mean to say is that the only vegetarian food that my father will concede is an actual food is pizza. Put a vegetarian pasta dish in front of him and he asks, “Where’s the chicken?”

And forget about tofu. The Tofu War (similar to the 100 Years War, both in duration and in number of body parts lost) is one that I don’t care to revisit anytime soon. Let’s just say that it was ugly, the casualties were many, and that it ended in me storming out of the house screaming, “Tofu is NOT a figment of your imagination!” 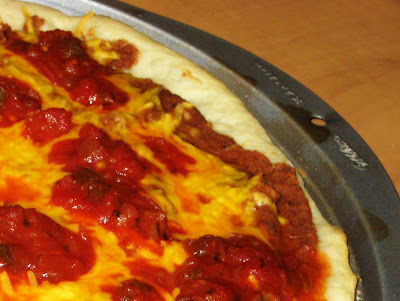 The moral of the story being that I have a soft spot for homemade pizza.

Especially when that homemade pizza has non-traditional toppings on it.

I was craving nachos the other day. Most likely because I watched a football game with a bunch of my friends. And somewhere in the far reaches of my mind, the neuron for “football” must synapse with the neuron for “nachos”. It also crosses somewhere with the neuron for “masochistic” (both in playing and in watching, sorry guys) although that’s really as far as it goes, as made apparent by the fact that the only thing I understand about the game is that you are not supposed to talk until the commercial break. Which is unfortunate for me, because that is the only part that I feel is worth watching.

Anyway. I wanted nachos. But what I didn’t have was chips. And what I did have was a ball of pizza dough in my freezer.

So I thought, when in Rome. With a stopover in Mexico City. 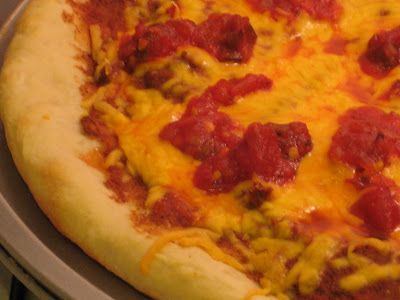 Preheat oven to 425. Half-bake your pizza dough for 10 minutes, remove from oven and set aside. In a bowl, mash together the refried beans and spices. Spread bean mixture over pizza dough. Sprinkle cheese evenly over top. Spread cheese layer with fresh salsa and bake until the pizza is heated through and cheese starts to bubble, about 10 – 15 minutes. Cut and serve. 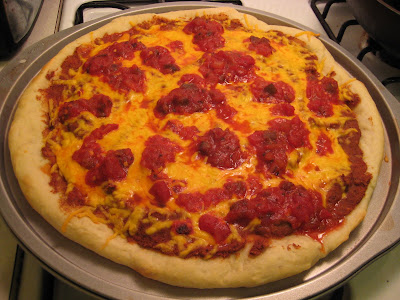