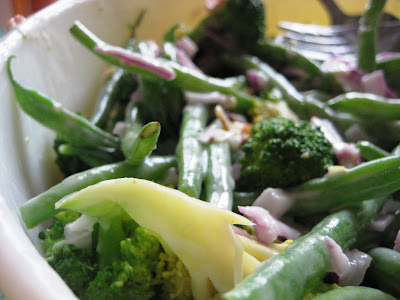 About a week before Christmas, I got a phone call from my brother.

Let me recount it for you.

Daniel: So…I don’t know if you know this, but your parents are cooking ravioli for dinner on Christmas.

Me: Ummm, yes Daniel I know. Because I requested it.

Daniel: It has tomato sauce on it.

I love the kid, really, but he is not coming across as the sharpest crayon in the box right now. He’s better than this. I promise.

Me: Yup, I kind of figured as much. Since tomato sauce is the only sauce your parents know how to cook.

Personally, I would have maybe done a browned butter sauce. With some butternut squash chunks. But it’s hard enough to get them to eat green veggies, let alone orange ones.

Daniel: Well…you know that I can’t eat tomato sauce. So I was wondering what you were going to make. For me.

Me: I mean, I was going to make some kind of vegetable. What vegetable do you think you would eat?

Me: Okay Daniel, I am going to tell you something now. It might blow your mind. We are having ravioli for dinner. That is a starch. Potatoes are also starches. I am not making potatoes to go with ravioli.

Silence. Except for his breathing on the other end of the line. A good sign, in theory, except that it means that he has no other suggestions. How did I come from this family of meat and potato eaters, I can’t really say.

Me: How about broccoli? You eat broccoli. I know you do. You have it in Chinese food all the time.

Daniel: Yeah but I only like it really crunchy. Like, almost raw crunchy. And I don’t think you can handle that.

Wait a second. Was that a CHALLENGE. Did the boy who doesn’t eat anything except for Tex-Mex and Chinese food just CHALLENGE me to cook broccoli? IT’S. ON. 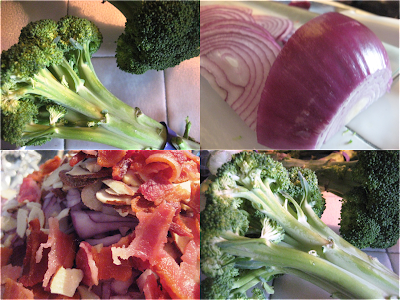 So the thing that I’ve learned about cooking for large groups of family members is that you can’t possibly please everyone. Really. Don’t even bother trying.

It’s something that still gets me every time, since in general I aim to please. But in the end I had to make some choices. Cut the fat somewhere. And so I decided to make this broccoli salad, all the while knowing that I would have two people who wouldn’t eat it. First up was my father who only likes his vegetables very mushy. (He would have fared much better in the early 1900’s when everyone was boiling vegetables until they were limp and listless. I prefer my vegetables to not have the living daylights beat out of them, thank you very much.) The moral being that his predilection, being in direct contrast to my brother’s, meant that he wouldn’t be happy with the dish.

I decided I could live with that.

Then there was my uncle, who has diverticulitis. This salad has almonds in it. I could have left out the almonds. But I didn’t want to.

And that’s all I have to say about that. 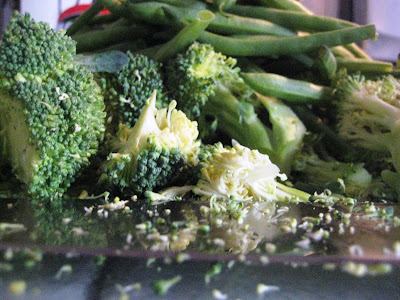 So what happened, in the end?

Well. My brother sat there, watching me like a hawk while I cooked the broccoli. I told him not to worry, I was only going to boil it for a minute and then blanch it. There was no way it was going to be mushy.

He insisted on whipping out a timer. And counting down the seconds, screaming at me to drain it and practically pelting me with ice cubes from the ice water after the minute was up.

Daniel, if the ice cubes are on the floor, they can’t possibly be used to stop the broccoli from cooking any more, I tried to explain. All that got me was an ice cube down my shirt.

My aunt also appeared at our house with a large aluminum foil-covered tray in hand. I peaked inside.

Just as I suspected.

Will they never learn?

But this story does have a happy ending. (As most Christmas stories do.)

Maybe it was the mayo. Maybe it was the bacon. (Yes, even I am capable of compromise. But only on Christmas.) But everyone really liked the salad. Even my father ate some (although he did say, Joanne. I think the broccoli and string beans could have been cooked a little more. I didn’t dignify that with a response.)

But you can come close.

I am submitting this to Souper Sundays!

Also, unrelated side note. I had an awesome dinner last night with Mari of Namaste and her sister! We went to Katz’s Deli for some delicious brisket and/or pastrami sandwiches on rye, and then to this cute little dessert place. Lots of good food and good conversation. It was a blast. 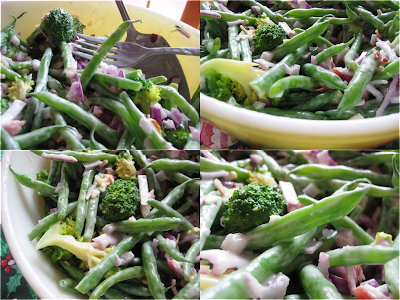 1. Bring a large pot of water to a boil, adding the tsp salt to the water before doing so. Add the broccoli and string beans. Cook for one minute. Then drain and blanch by pouring ice water over them. Put in the fridge immediately.

2. Combine broccoli/string beans, almonds, bacon, and onion in a large bowl. In a separate bowl, whisk together the mayo, vinegar, and honey. Add to the salad and toss. Chill before serving.