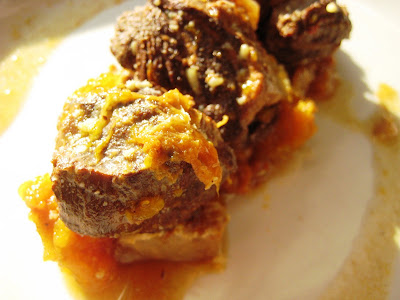 It was the summer of ’08 when I first coined the catchphrase.

My mantra, if you will, for how I want to live my life.

I remember because Tiffany and I would repeat to each other whenever we went out to eat, which was pretty frequently, especially considering our limited college student budgets. But we would scrimp and save and eat peanut butter sandwiches all week long so that when Friday came around, the culinary adventures could begin.

Eat the world. That was, and still is, our goal.

She was in New York for the summer and, being a west coast girl at heart, we knew that this was probably the most concentrated time she would ever spend here. So we had to take advantage of it while we could. Every weekend was a new restaurant, a new type of food. Arepas (Venezuelan), barbecue, Thai, Cuban, Korean, Italian, to name a few. We ate so much, and yet for every restaurant we went to it seemed like there were fifty more yet to try. But that is the beauty of New York, I guess. No matter how much time you spend here, there is always something new to discover. 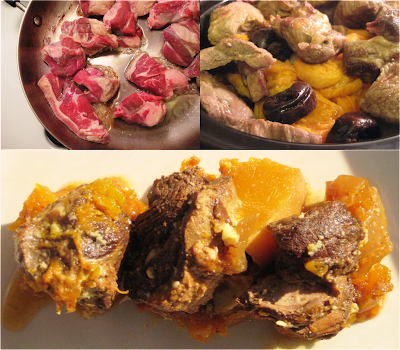 When I started reading A Taste For Adventure by Anik See, I soon realized that she was doing, literally, what Tiffany and I had originally set out to do. She was eating the world. Traveling to some of the world’s most under-frequented countries – Malaysia, Patagonia, Armenia, Iran – alone, on foot and/or bicycle, mind you (this girl has guts), and immersing herself in their culture. By essentially walking into a small village or town and sharing food with its inhabitants. And this is not the commercialized five-star restaurant Americanized stuff that you or I would eat should we visit any of these countries. No, this is the food of the people. Street food that is sold at the local marketplace, weeknight dinners served up around the kitchen table, meals that are prepared on the side of the road around makeshift fire.

The most miraculous thing, though, at least in my opinion is that Anik is welcomed into all of these places with open arms. Complete strangers offer to let her stay with them, practically throwing themselves at her in their desire to share just a little bit of their lives with her and, through the book, with the world. Their cordiality and generosity is surely a testament to the power that food holds over us. We live to eat together. And there is not much more to it.

Needless to say, I really loved this book. It is extremely descriptive and beautifully written. Each chapter features Anik’s adventures in a different country and ends with a series of recipes for food that she has described eating. Some of the highlights, I imagine. Each of which is seemingly more delicious than the next.

For my Cook the Books entry, I could have made one of these. But how could I possibly choose? So instead, I decided to further Anik’s travelogue by “visiting” a country from the one continent (besides Australia) that went unfrequented.

But what do I, an American-Italian girl born and raised in New York City, know about African cuisine? Aside from a visit to an Ethiopian restaurant a year ago. Nothing.

So I consulted a cookbook that I bought this past year called Medina Kitchen. Filled with beautiful pictures and bursting with color, the book provides recipes for food that is produced by home cooks in Morocco, Tunisia, and Libya. Food that you will not find at a restaurant in America, but one that you would definitely find at a dinner table in any of these countries. In short, exactly the kind of thing that Anik would have eaten along her travels. 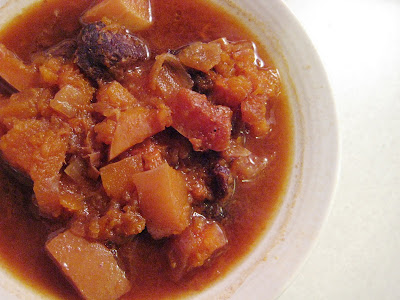 The recipe that I chose to make – Lamb with Pumpkin and Apricots – is a stew from La Goulette, the capital of Tunisia. It combines the tartness of dried apricots with the sweetness of butternut squash to produce an exquisitely flavored dish. The best part, though, was imagining that while I was eating it, that there were potentially people halfway around the world who were doing the exact same thing.

Talk about bringing people together.

Lamb with Pumpkin and Apricots
Serves 4, adapted from Medina Kitchen

NOTE – I made this in the crockpot because I felt that it would be easier and make for some really delicious meat, but you can certainly do it on the stove (as directed in the book).

1. Heat a large skillet and spray with cooking oil. Brown the lamb on all sides. Deglaze the pan with the broth. Add in the spices. Heat until warmed through.

2. Put the onion, butternut squash, dried fruit, sugar, and lamb/broth mixture into the crockpot. Cook on low for 8 hours.

This is my submission for Cook the Books and to Deb’s Souper Sundays.

It is also my last entry into my 12 Weeks of Winter Squash!