The LOLA Burger, Brussels Sprouts, A Homemade Bun…and A Giveaway! 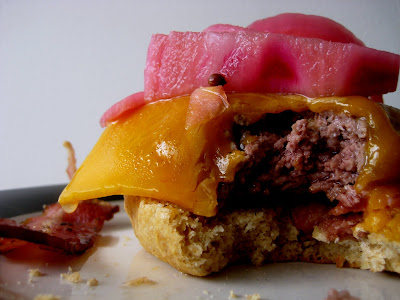 Not to sound jaded or anything.

But after living in New York City for 23 years. You learn a few things. The ropes. You learn. The. Ropes.

So when Sophie, Adam, and I got into a cab the other day. And the first thing the cab driver asked was, “So which of you two ladies are single?”

Our gut reaction was to run. 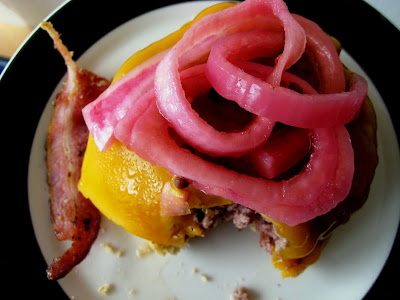 But we’d already gotten in and Adam was with us. So we hemmed. Hawed. Rationalized. (Note – this is how people get kidnapped. Yes. You can still get kidnapped after the age of 20. If this happens to you. Run.)

So we told him where we were going. And hoped for the best. 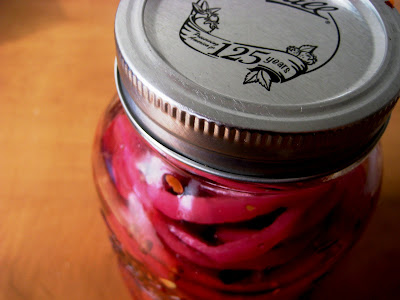 A few seconds later. We are zipping along the FDR Drive.

This is not boding well.

We look at each other. Uneasily. Until finally Adam pipes up and says, “No. Who are you?”

(Best to let Adam do the talking. He has a penchant for chatting up cab drivers. The last cab we were in together, he got into a conversation with the driver about his favorite operas. Adam doesn’t even like the opera. I’m not sure how he does it either.) 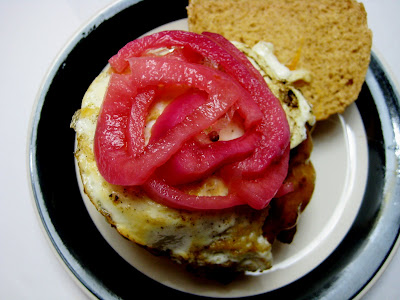 Apparently, this guy, Ahmed Ibrahim, drives around and sets up blind dates for his single passengers.

Um hello people? Do you know what I am? Single. Very. Single.

So he starts asking us questions about our likes, dislikes, careers. The whole shebang. And I am answering left and right while visions of picket fences (in New York, Jo? Really? What are you, a suburbanite?), 2.5 children, and sugar plums dance through my head. ( I don’t know where the sugar plums came from. I guess I was hungry.) I start to picture my future husband and I strolling hand in hand through Whole Foods, doing 20 mile long runs together, shopping for kids beds on the CSN website (aren’t they cute?). 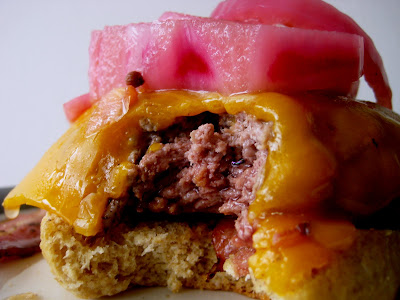 Then comes the real heartbreaker. He says, “Well, I wouldn’t match you girls up anyway.”

Um. Hold on. Stop the presses.

“I only match up girls over 26 and guys over 30. Otherwise you are just crazy, want one night stands. I’m looking for love.”

Yeah well. So am I. But no amount convincing would get my new friend Ibrahim to take my number.

So. New plan. If I’m still single when I’m 25. I will give up riding the subway entirely, only use cabs (by then the subway fare will probably be so expensive that taxis will be cheaper anyway). Until Ibrahim and I meet again.

And until then. I’m going to have to pimp myself out.

My last resort. This is called. Pulling out all the stops.

Bacon cheeseburger. Topped with a fried egg. On a homemade bun. With pickled onions. (No ketchup. Remember. Ketchup = me projectile vomiting all over my kitchen. Not romantic. At all.)

Now guys. If that doesn’t get you all riled up. I don’t know what will.

Heck. I might even have to go take a cold shower. 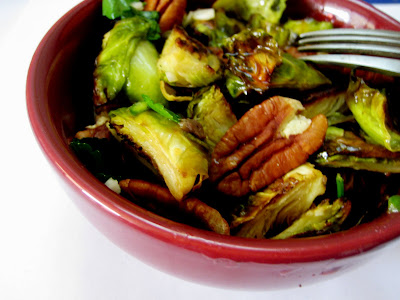 So this week’s recipes for Symon Sundays were The LOLA Burger (described above) and Fried Brussels Sprouts with Walnuts and Capers. There was also a recipe for pickling onions in there because that was one of the toppings for the burger. And I added in a recipe for homemade buns. Because of this whole no bread buying thing.

After eating these. I’m pretty sure that Michael Symon is my soulmate. So Michael. If you’re reading this. Will you marry me? 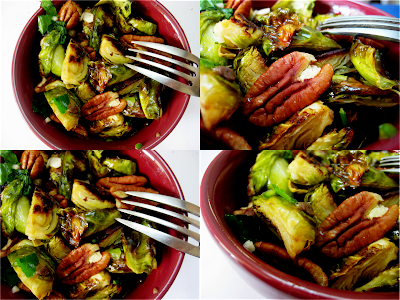 Brussels Sprouts with (Pecans) and Capers
Serves 4, adapted from Live To Cook

NOTE – I didn’t actually fry the brussels sprouts. I just couldn’t. Instead, I baked them. I also used pecans instead of walnuts because I still have half of a huge bag of pecans that I bought from BJ’s. And no bags of walnuts. And because I am trying to be somewhat frugal. I also cut out a lot of the olive oil.

Heat the oven to 400. Put the brussels sprouts on a baking sheet, spray with oil, sprinkle with salt and bake for 40 minutes.

Whisk together the garlic, anchovies, serrano, red wine vinegar, honey, scallions, walnuts and extra-virgin olive oil in a bowl large enough to toss all of the Brussels sprouts.

When the sprouts are done, mix them with the above ingredients, capers and parsley. Toss to coat. Add salt and pepper to taste. 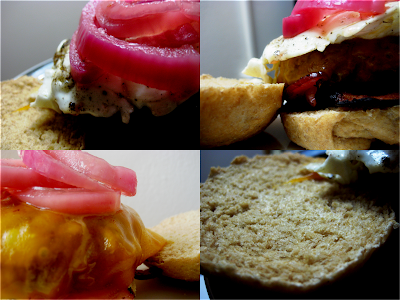 Pack the onions in 2 1-quart jars and cover with water to come within a half inch of the rim. Pour the water out into a measuring cup. Note the volume, pour off half the water, and replace it with vinegar. Add 2 tablespoons sugar and 2 tablespoons salt for every 3 cups of liquid. Pour the vinegar mixture into a nonreactive saucepan, add the mustard seeds, red pepper flakes, coriander seed, black peppercorns, garlic, and bay leaves and bring to a boil over high heat. Allow the liquid to boil for 2 minutes, and then remove it from the heat.

Pour the hot liquid into the jars to cover the onions and screw on the lids. Refrigerate for up to 1 month.

The LOLA Burger
Makes 4, adapted from Live to Cook

NOTE – I used 96/4 beef. Only a pound of it. Don’t look at me like that. I am cooking for one. Therefore I will be eating this every day. For four days. I would like to not have a heart attack in the next week or so. But Symon says to use 75/25. So feel free to do that. I won’t judge you. Although I ate it with the requisite egg on the first day, I also cut that out for the subsequent burgers, hence why some of the burgers are sans egg. (The pictures came out better on the second day). I did. However. Use real bacon.

Build a medium-hot fire in your grill or preheat a stovetop grill pan.

Cook the bacon in a sauté pan over medium-high heat, turning once until crisp, 5 minutes. Remove the bacon to paper towels to drain. Reserve the bacon fat in the pan.

Form the ground beef into 4 patties, each about 3 ½ inches in diameter. Season the patties with kosher salt and cracked black pepper. Place the burgers on the grill or in the grill pan and cook for 3 minutes. Flip and top each burger with a slice of cheese. Grill for 3 minutes for medium rare. Remove to a plate. Add the English muffins to the grill or grill pan and toast for 1 minute.

Cook the eggs sunny-side up in the bacon fat while the burger rests.

Build the burgers by sandwiching them between the muffin halves along with pickle slices, red onion, bacon, and egg.

One-Hour Hamburger Buns
Makes 12, adapted from Once Upon A Plate

NOTE – these were good and buttery. I approved.

Heat the milk, water, honey and butter until butter is melted. Check temperature. Depending on the temperature, let cool to 120F. Carefully beat in egg.

Mix 2 cups of the flour, yeast, and salt. Mix into the milk mixture. Stir in the rest of the flour, 1/2 cup at a time. Beat well after each addition.

When the dough pulls together, (it will form a soft ball) turn it out onto a floured surface and knead until smooth and elastic. This should take about 5 minutes.

Divide dough into 12 -16 equal pieces. This will depend on the size you want for the finished bun. Shape into smooth balls, flatten slightly, and place on a silicone mat-covered baking sheet.

I cover loosely with plastic film and allow to rise for 30 to 35 minutes. When buns have almost doubled bake at 400 degrees for 10 to 12 minutes.*

*If desired, after buns have risen, brush tops with beaten egg for a shiny glaze, you may also add sesame seeds, sauteed minced onions (cooled), coarse salt, etc. to the brushed tops, then bake. 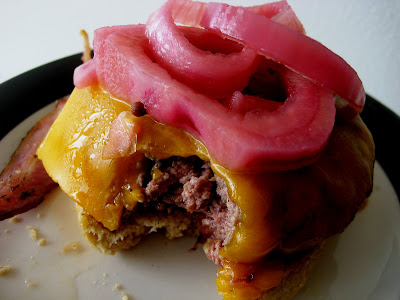 I have seen CSN giveaways around the blogosphere a lot in the past few weeks and so when they contacted me about featuring one here, I knew that it was something I wanted to take part in. After perusing their website for a while, I stumbled upon this All-Clad Stainless 12″ Frying Pan!

I knew you guys would love this! So. Here’s how you can win.

Leave a comment on this post. Answering the question. What was the best burger you’ve ever eaten?

I’m not going to do the whole Twitter/Facebook/Follow Me thing for extra entries. Since I don’t use Twitter or have a facebook page for the blog, etc. And you’re following me anyway, right? So no bonus points for that.

The giveaway will end a week from today, so get commenting! You do not need to have a blog to enter, but if you don’t be sure to leave an email address where I can contact you!

Also, CSN can only ship to places to within the US, so sorry to all of my international readers!

109 Responses to The LOLA Burger, Brussels Sprouts, A Homemade Bun…and A Giveaway!