Salmon Poached in Court Bouillon and Braised Endives with Citrus 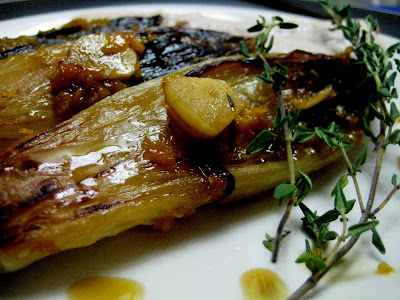 I could jump on the bandwagon.

Start out this post with an image of me running around my room, hands flailing around, screaming, “SAINTS WON! SAINTS WON!”

But that would imply a few things. None of which are true.

Firstly. That I like football. Which is not false, necessarily. I don’t dislike it. I just don’t like it. Probably because I can’t for the life of me understand it. I mean. I understand the premise. And the rules. But if you sit me in front of a tv screen on which a football game is playing? I am for some reason incapable of following it for more than two seconds. My mind wanders. I lose interest. I start thinking about what I’m going to cook for dinner next week and whether or not I should have bought those plantains the last time I was at Whole Foods and, wow, aren’t plantains one of the best things ever invented?

And then by the time I look up and regain my bearings? Someone has gotten some down or something and I am completely lost. All over again.

Maybe that’s why I like baseball so much. You can zone out for five minutes and won’t have missed anything.

It might also lead you to believe that I watched the game. At all. Any of it. Which would be a complete lie. I meant to. But decided that I wanted to eat sushi instead. And by the time I was done with that, all of my guy friends had left the bar that they were watching it at. So go figure.

And then there’s the whole part about being a Saints fan. Which, I guess, is kind of true. Since, on our way to the sushi restaurant, I did declare to Sophie and Anu that they were who I would be rooting for. Why the Saints, you may ask, given my obvious ambivalence toward the sport in general? Now normally I choose who I want to win based on uniform color. But this year, I weighed them in terms of food.

Versus…I’m not sure. What do people eat in Indiana?

Don’t know. But whatever it is, it’s not jambalaya. 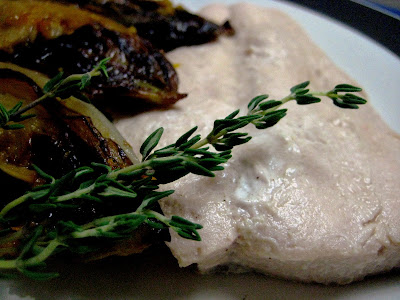 Similarly. I could also run around screaming about how much I loved this dish. Convince you that, yeah it might be 7:15 AM but you need to stop what you’re doing and start making this immediately. But that would only be partially true.

You see. I thought the salmon was fantastic. It really was. It was salty and lemony and everything that I love in a fish. So maybe you should go to the store immediately after reading this and pick up some salmon.

But then there were the endives. And it’s not that they were bad. I just, apparently, don’t like endives. Which I should have realized. But didn’t.

I mean, they look like something I should like. Especially with that caramelized pan-fried mouth-wateringly good exterior.

But then I bit into one and was hit with that kind of bitter undertone that I don’t like in escarole either (strange because I love the bitterness of broccoli rabe – again, that’s the problem. All indications pointed to love. Go figure.)

However. I did really like the citrus sauce that they were cooked in. It was sweet and tangy and delicious. And would be great over many other vegetables. Like broccoli. So if you like citrus and you like endives?

Feel free to jump on the bandwagon. I won’t call you on it. I promise. 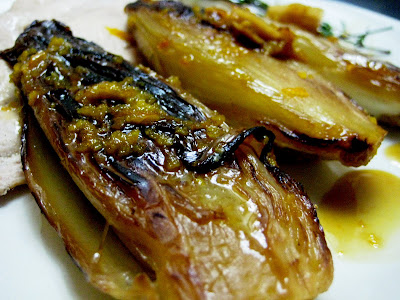 2. Heat a large ovenproof saute pan over medium heat and add the olive oil. Place the endive in the pan, cut side down. Season with salt and cook until nicely browned, about 5 minutes. Add the garlic and sweat it for 1 minute. Add the thyme, orange zest and juice, stock, and honey. Bring to a simmer and then place the pan in the oven until the endive is cooked through and tender, about 20 minutes.

3. Remove the endive from the pan to a platter. Reduce the pan liquid over high heat to about 1/3 cup, swirl in the butter, and spoon the liquid over the endive. 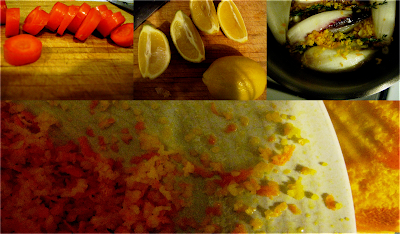 2. Bring the court bouillon to 175. Submerge the salmon fillets in it. Using an instand-read thermometer, keep an eye on the temperature of the liquid to make sure you don’t let the temperature drop too low. On the other hand, if it begins to simmer, it’s too high. Remove the salmon when it feels medium-firm when poked, 7-10 minutes. Remove the fillets to paper towels to drain before serving.

This is what we are cooking up for this week’s Symon Sundays! I am hosting this week so be sure to check back here on Sunday to see everyone else’s dishes. 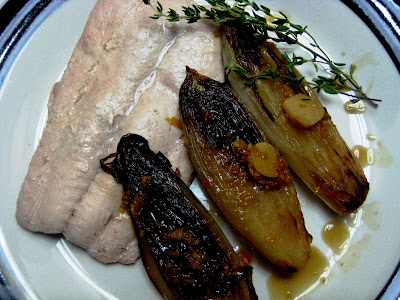