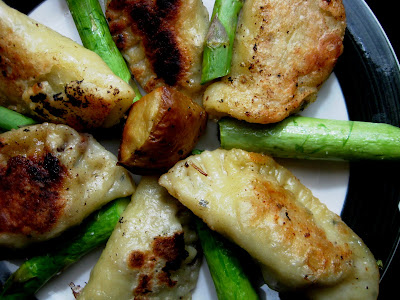 When my brother arrived for dinner last Friday. To say that I was a sight for sore eyes. Would be a slight understatement.

I looked kind of like I had been electrocuted. And then forced to wade in a pool of flour. It was definitely a mad scientist kind-of a “do”. My hair was standing up in just about every direction possible. And there was not a spot that wasn’t white and powdery to be found on any part of my clothing. (Okay maybe I looked like a cross between Einstein and that cocaine addict who lives on your corner and asks you for a hit every day. What, you don’t have a local town coke fiend? Weird.)

That was when Daniel deemed it appropriate to give me the apron he had brought me back from Argentina. A little late. But much appreciated. For, you know, the next time I make pierogi (hah). 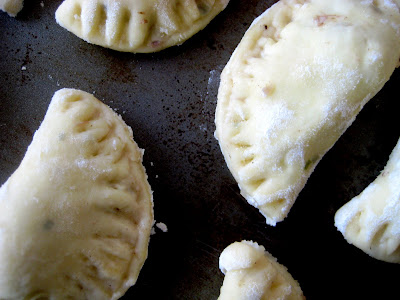 I should have known this was going to happen, really. Considering the all-day affair that was last year’s gnocchi making.

But I figured that, you know, back then I was a budding cook. I was inexperienced. I had no idea what I was doing. I was flailing around. Aimlessly. But now? Now I bake bread at least once a week. And I can make risotto with my hands tied behind my back (I’ve developed the ability to move my spoons with my eyes and mental prowess). Pierogi? I thought. No problem.

And really. The first half was fine. After stuffing each pierogi, I squealed and said, “Aren’t these so cute!”

No response from the peanut gallery. I tend to get very emotional about food. Daniel is much more stoic. In general.

Then, halfway through stuffing the beef into the dough, I experienced what can only be called a mid-batch crisis. I began to doubt myself and everything I had done up to this point. What is the purpose?, I asked myself. Why are we even here? It was a total existential debacle, if ever there were one.

I looked at Daniel with woeful eyes and asked him if 18 pierogi were enough (and to think I only made a half recipe to begin with!) He didn’t respond. So I took that as a no. Sighed. Resignedly. And forged ahead. 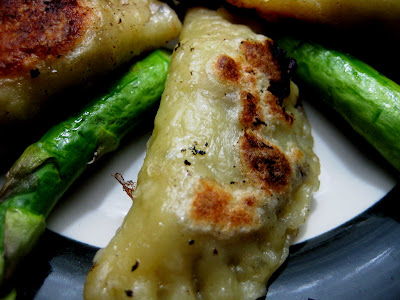 In the end, though. After the boiling. And the frying. (And a well-deserved post-dinner nap.)

I have to say. That it was worth it. The chive-infused dough made for a delicious, buttery shell. Reminiscent of a fried Chinese dumpling. And who can resist a good Chinese dumpling? Not I. And certainly not Daniel, the champion of all things fried, beefy, and dumpling-esque.

Just. The next time I make these. (And I will make them again.) Remind me to take a valium first. Or five.

Before the recipe, it’s CONTEST TIME. The kind folks over at MarxFoods have invited me to host a contest over at their blog. You should go check out the post with the details. But basically it’s a caption contest, judged by yours truly. The deadline is this coming Monday and the winner will receive an AWESOME prize. So really, get your booty over there ASAP, spend some quality time this weekend thinking about a witty caption to win my heart, and go post it! 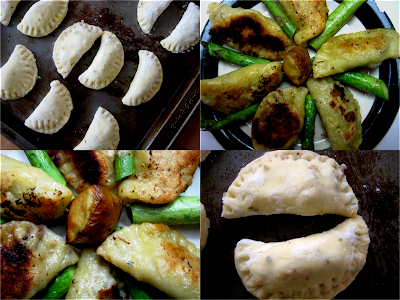 The number of changes I made to this recipe. Were many. To say the least. Firstly. I cooked the beef in the slow cooker instead of in the oven. It was easier. I set it up before I went to bed and woke up to the hearty smell of meat and red wine. If that doesn’t get you out of bed, I don’t know what will. I should mention that I substituted beef shoulder for beef cheeks. For obvious reasons. I also used Greek yogurt in the dough instead of sour cream. It was what I had on hand. And the dough tasted absolutely delicious. We were also supposed to make these with sauteed mushrooms and horseradish sauce. But I just didn’t get around to buying the necessary ingredients. Due to extenuating circumstances (re: Easter). So I’m deeply sorry to all of my fellow Symon Sunday-ers. I hope they can forgive me.

I am going to post the recipe as I made it, but you can find the real version here (scroll down to the middle of the page). I made a half batch of dough and a whole batch of meat. And then ate the meat on sandwiches with cheddar cheese the rest of the week. They were delicious as well.

Beef Shoulder Pierogi
Serves 8-10, as an appetizer. Four as a main course. Adapted from Live To Cook.

Make the dough: Mix egg, Greek yogurt, butter, chives and salt. Mix in flour thoroughly until dough forms. Wrap in plastic wrap and refrigerate at least two hours (or up to two days).

Brown the beef: If using beef shoulder, slice 1/2-inch thick. Heat oil in Dutch oven over medium-high heat. Season beef with salt and pepper and dredge in flour. Cook in batches to brown, about 6 minutes. Remove from oil.

Cook the beef: Put beef in the slow cooker along with all of the ingredients up until the 2 tbsp butter. Cook on low for 6-8 hours.

Cool, chill the beef: Turn the slow cooker off. Let it sit on your table. All. Day. Long. Or put it in your refrigerator. If you are lucky enough to have room in it. I was not.

Shred the meat: Remove meat from liquid, reserving liquid, then shred the meat. Warm the liquid and strain out the vegetables. Boil the liquid until it reduces by two-thirds. Mix in shredded meat and allow to cool.

ssemble the pierogi: Roll out dough to about 1/8-inch thickness.

Boil the pierogi: Bring a pasta pot full of water to a boil. Add pierogi, 6 to 8 at a time, and cook until they float, then allow them to cook about 4 more minutes. Drain.

Saute the pierogi: In a large skillet, heat 4 tablespoons of butter and saute pierogi in batches until they are brown.

I served the pierogi with some roasted potatoes and asparagus.

This is my submission to Symon Sundays! Stop by Ash’s site on Monday for the round-up! And to 5 Star Foodie’s 5 Star Makeover: Pasta! Challenge!

I am also submitting this to Presto Pasta Nights which is being hosted this week by Daphne of More Than Words! 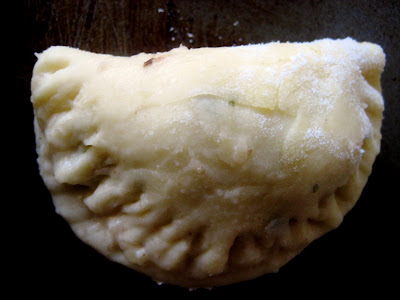