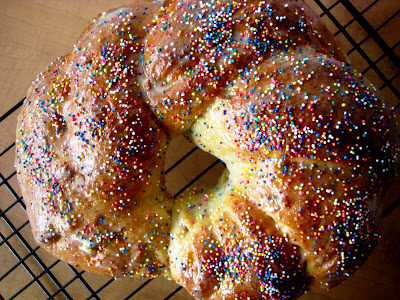 Let’s dredge up some memories.

(Am I the only person out there who finds long term memory to be absolutely romantic? Your neurons take a thought, an image, a feeling. Break it up into little pieces. And dot them throughout your brain. It’s a safety mechanism so that, should something happen to a cluster of neurons in one location, your prefrontal cortex for example, you don’t have to fear. There are other clusters with the same information in your cerebellum. Ensuring that, at least the important things, will not be left behind. Forgotten. It also explains why you could be sitting on a stationary bike at the gym. Thinking about what color socks you will wear tomorrow. When all of a sudden images of your first school dance pop into your head. You just never know how the circuits are connected. It’s random. And yet not. Love that.) 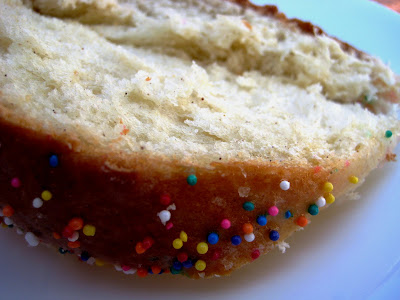 Anyway. Now that I’ve waxed poetic about neurology for long enough (scratch that off the bucket list). Let’s remember.

When I think about Easters past. I, of course, remember chocolate bunnies. Reese’s peanut butter cups. Jelly beans. 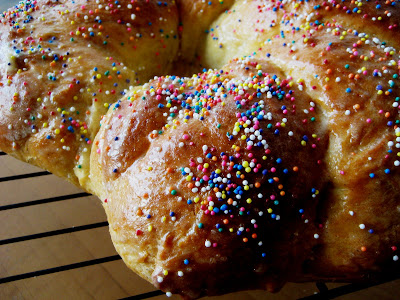 Mostly, though. I remember my grandmother’s Easter bread.

She made loaves upon loaves of it every year. And we would take two or three. Freeze them. And eat them, covered in butter, for weeks afterward.

It was light. Fluffy. And covered in a confectioner’s sugar glaze that clustered around the center of the loaf, which I would always save for last.

I can’t remember anymore when she stopped making them. Probably when we moved her from the Bronx to an apartment across the street from my parents. (Yes we are very Everybody Loves Raymond.) About seven years ago.

And by now. Although many of her other neural connections have been lost in the ether. I’m willing to bet that she could remember how to make this bread. If she wanted to. (From muscle memory, at least.) But first she’d have to remember what Easter is. And that, I think, may be too much to ask. 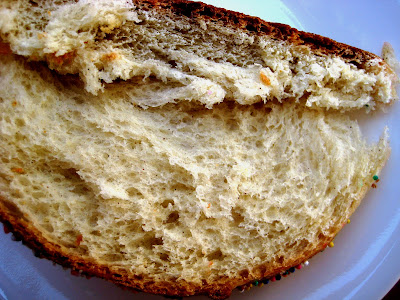 When I announced to my family that I was making this bread, my brother almost screamed for joy. (That’s how good it was. My brother doesn’t scream for food. Ever.)

My mother, on the other hand, had no recollection of us ever even liking this bread. The shrieks of jubilee coming from my siblings somehow did not clue her in.

She then asked why I wasn’t going over to my grandmother’s house to make it. Kind of difficult, considering that you disconnected her oven, Mom.

Anyway, I found the whole scene very comedic. I’m on the phone. Daniel is screaming in the background and the whole time my mother is saying, “You liked this bread? Really?”

Being able to present it to my family was possibly one of my proudest moments as a baker. Followed only by tasting it. Which was a revelation in and of itself. 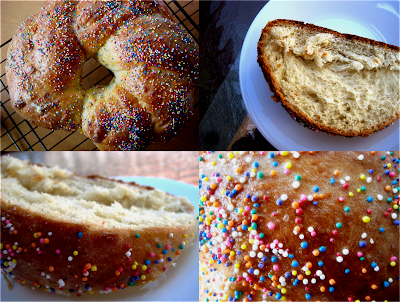 Italian Easter Bread
Makes 1 loaf, adapted somewhat from Cinnamon Spice and Everything Nice and mostly from my memory

1. In a large bowl, combine one cup of flour, yeast, salt, cinnamon and sugar. Heat milk and 2 tbsp butter over low heat until the butter has just melted. Add to the dry ingredients and milk for 2 minutes on medium speed, scraping the bowl occasionally.

2. Add eggs and 1 3/4 cup flour. Mix by hand or with a Kitchen Aid stand mixer, if you have one (I don’t). Stir in enough extra flour to make a soft dough (I ended up using probably the whole 3 1/4 cups). Turn onto a floured board and knead for 8-10 minutes. Place in a greased bowl. Cover and let rise until doubled in size, about 1 hour.

3. Punch down the dough. Divide in half. Roll each half into a rope. I think my ropes were about 1 1/2 feet each. Twist ropes together, then connect into a ring on a Silpat or baking sheet covered with parchment paper. (NOTE – traditionally this bread has you incorporate colored eggs into the dough. But my mom is very squeamish about such things and I didn’t want to “waste” any eggs, so I left them out.) Cover and let rise for another hour. Brush with melted butter. 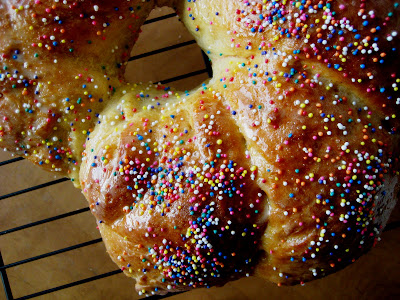