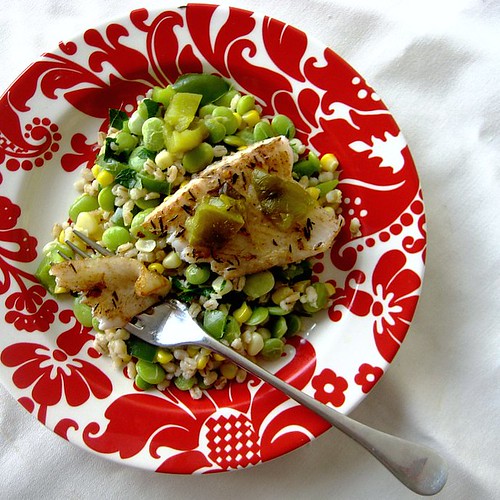 Michael (Symon) and I are fighting.

(Although personally, I’m just in it for the make up sex.  But don’t tell him that.  He thinks I have “principles” and “stances”.  A “side to my story”.  Lies, all around.) 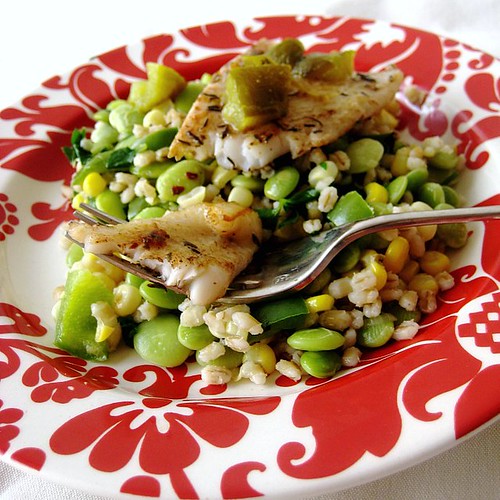 We are fighting because I did not listen to a word he said in his recipe for slash-and-burn grouper.

I didn’t even use grouper. 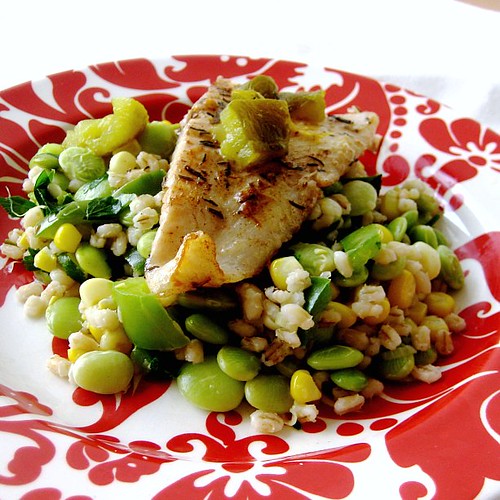 “You think you know a person…,” he said solemnly.  As he shook his adorable bald head sadly and then stormed out of my imagination. 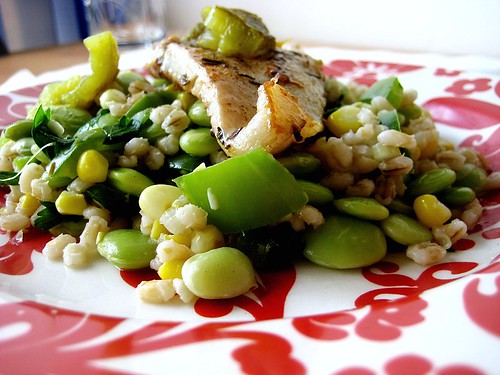 And in the meantime, I’ll be waiting here.  With this jerk seasoned flounder that was far too thin to slash or burn without turning the whole meal into a charred and completely disfigured mess (we are talking five car pile up kind of distortion.  Not pretty.).  But due to some island jerk seasoning that I bought while on a cruise to the Bahamas last year and the delicious lime and roasted bell pepper sauce that I listened to word-for-word-so-help-me-god (did you hear that, Michael honey?  I can so too follow directions.) was absolutely fantastic.

That I served with Bittman’s barley succotash salad.

A shameless attempt to make Symon jealous.  Because if there’s anything better than make up sex.  It’s make up sex tinged with a hint of jealousy.

In the words of that big red Kool-Aid man.  Ohhhhh yeahhh. 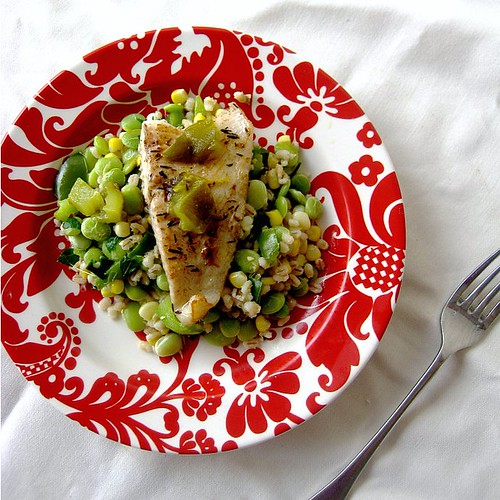 1. If your fish is thin, like mine was, then just seasoning with the jerk seasoning.  Heat 1 tsp olive oil in a non-stick skillet.  Fry the fish for three minutes, about 2 minutes on one side and 1 on the other, or until done.

2. If your fish is thick, like Symon’s.  Preheat the oven to 375.  Cut a pocket horizontally through the fish about 2 inches wide and 2 inches deep.  Spread about a tsp of jerk seasoning in each fillet.  Heat an ovenproof saute pan over medium heat and add the olive oil when hot.  Pat the fillets dry with a paper towel, season lightly with salt and lay them in the hot pan.  lt brown for 3 minutes and then gently turn them.  Place the pan in the oven for 3-5 minutes or until the fish has reached an internal temperature of 140.  Remove fish to a warm plate and set aside.

3. Add the stock and lime juice to the same pan that you cooked the fish in.  Simmer and then reduce by half.  Remove from the heat and whisk in the butter and then the bell pepper.  Pour over the fillets and garnish with cilantro.

Barley “Succotash”
Serves 4, adapted from Bittman’s How To Cook Everything Vegetarian

1. Heat 1 tbsp of olive oil in a medium saucepan over medium-high heat.  Add the barley and cook, stirring frequently, until lightly toasted and fragrant, 2-3 minutes.  Sprinkle with salt and pepper.  Stir in 2 1/2 cups water.  Bring to a boil, then cover and reduce heat to low.  Cook, stirring a couple of times, until the water has nearly been absorbed, about 20 minutes.

2. Put the remaining tbsp of oil in a deep skillet over medium-low heat.  Add the garlic and cook, stirring occasionally, until fragrant.  Add the beans and sprinkle with salt.  Cover and cook until just tender/thawed, about 5 minutes.

3. Stir in the corn, bell pepper, and scallion and cook the mixture for a minute or two.  Stir in the barley and whatever cooking water remains in the pot (only about a tbsp).  Cover and cook another 5 minutes.  Stir in the parsley.  Season to taste with salt and pepper.

NOTE – I would probably add some acid to this, maybe some lime juice.

This is my submission to this week’s Symon Sundays, IHCC, Reeni’s Side Dish Showdown, and Deb’s Souper Sundays!

Please send me your dishes for Regional Recipes: PUERTO RICO!

And congratulations to Caronae of Run.Write.Therapy.Life for winning the CSN Giveaway! 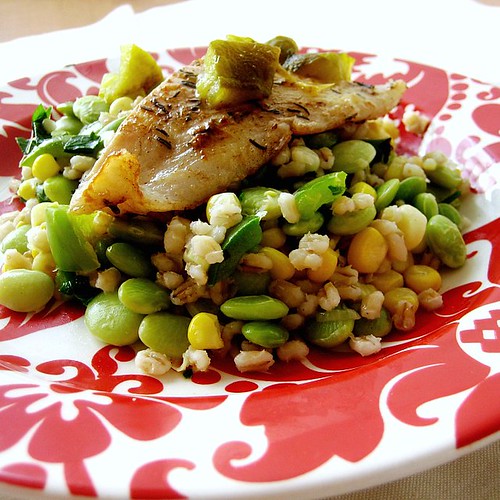