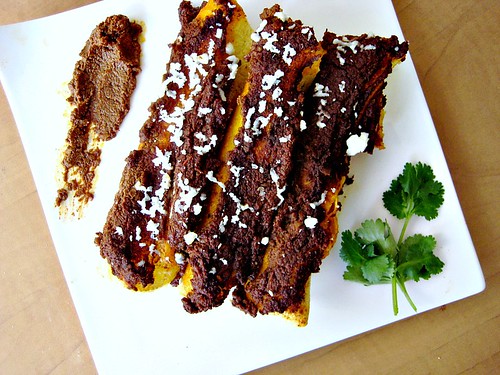 To say that the thought of making molè sauce has struck fear into my heart since I first tasted it in 2006.  Is.  Well.  An understatement.

In reality, I have lived in mortal terror of this rich and complex entity (and trust me, this sauce is an entity if ever I’ve heard of one.) ever since one fateful night out in Boston when my college roommate convinced me that my life would not be complete without it.

Actually, she told me to stay away from it at all costs (she had had a bad experience with homemade mole` a few years earlier and had reportedly been scarred for life).  And so I, in true Joanne fashion, forged ahead and ordered it, completely unperturbed by the mass of brown goo that arrived in front of me a mere twenty minutes later.  I mean, how is a girl going to achieve her goal of eating the world if she shirks at every mass of brown goo that appears in front of her.  Really.

Suffice it to say that after one spoonful, the thick sauce coating my tongue with its bitter sweet savory spicy mix of chiles, raisins, nuts, and chocolate.  I was hooked. 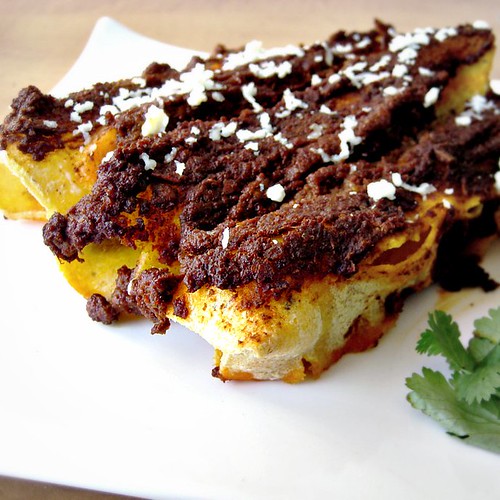 So, you ask.  What has kept me from making it these past four years?  What, pray tell, could the girl who has conquered pierogi, homemade pasta, and pulled pork (sigh.  pulled pork.) have to fear from a sauce?

Was it the twenty plus ingredient list?  The multiple hours of cooking?  The prospect of potentially letting down an entire nation of devout mole` lovers with some kind of subpar rendition of Mexico’s most celebrated cuisine?

In actuality, what has kept me from taking on the tremendous endeavor that is molè making.  Is the legend behind the sauce.  There are a few actually, and while its origins are shrouded in a dark and hazy history, the one consensus that all of them come to is that the awe-inspiring and counter-intuitive combination of ingredients that come together to make mole` what it is.  Is nothing less than an act of god.

Now I don’t if you know anything about Montezuma, the god of the American southwest and protector of all things Mexican.  But he was one wicked immortal.  And by wicked I mean vindictive, tyrannical, a force to be reckoned with.

And so it is fear of incurring his wrath that has kept me out of the kitchen all these years. 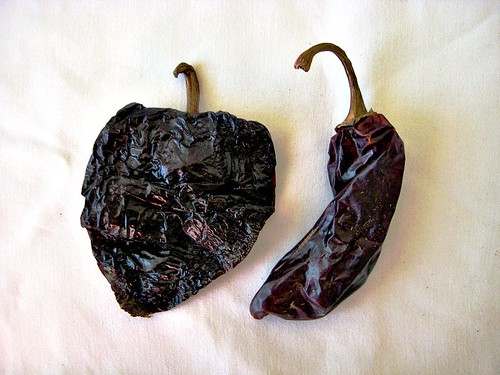 When I saw that the next challenge for Project Food Blog was to recreate a classic ethnic dish, I immediately knew that molè was the one I wanted to conquer.  I felt like I had finally built up my cooking prowess enough so that I would make something that Montezuma would be proud of.  Or, at least, wouldn’t strike me down dead for.

Plus, according to Wikipedia (a most trusted and revered source amongst students and food bloggers alike), molè was the first international dish created in the Americas, as it contained ingredients from three continents – the Americas, Europe, and Africa.  And what is food blogging about, if not bringing people together; bridging cultures through the sharing of food. 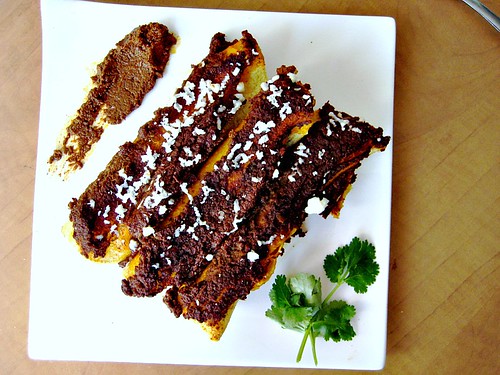 And so on one fateful Monday evening of last week.  When I should have been learning all of the different ways that the cerebellum acts to modulate and coordinate balance and movement.  I set to it.

Spices flew.  Nuts were ground.  Spoons were licked.  And I’m pretty sure every ingredient somehow managed to find its way into my hair at one point or another because I smelled like mole` for days afterward.  Or maybe it was just that some of it ended up on the ceiling.  Hmm.

It was a trying and arduous experience.  But after over an hour of simmering, when I tasted the concoction that I had been vigorously stirring at ten minute intervals, kind of worried that the whole thing was going to be a bust and that I had wasted a few hours of my life for naught.  I was transported back to that fateful day in 2006, the day that started it all.

And yeah.  It was worth it. 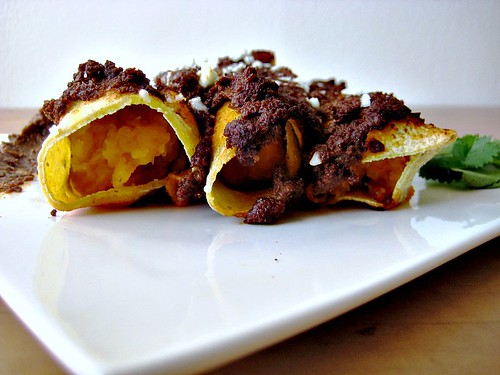 Butternut Squash Enchiladas with Red Molè Sauce
Serves 4, adapted from How To Cook Everything Vegetarian

1. Preheat oven to 400.  Cut butternut squash in half and de-seed.  Place it cut side up on a baking sheet covered in aluminum foil.  Put it in the oven and bake for 45 minutes to an hour, or until fork tender.  When done, remove and allow to cool.  When cool to the touch, scoop the flesh into a large bowl.  Mash using a potato masher, adding in almond milk as needed to smooth it out.  I added about 3 tbsp.  Add salt and pepper to taste.

2. Put the chiles, nuts, tahini, chocolate, onion, garlic, tomatoes, and bread in a blender or food processor. Add just enough veggie stock so that the machine won’t burn out on you without actually blending or processing anything.  Process/blend until pureed.

3. Heat 2 tbsp oil in a large pot over medium heat.  Add in the pureed mixture along with all of the spices.  Sprinkle with salt and pepper, not TOO much.  Just enough to bring out the flavors in the pot.  Cook, stirring frequently and scraping the bottom of the pan, until it begins to turn color, about 3-5 minutes.  Turn the heat to low, and cook, stirring occasionally, until the mixture is deeply colored and almost dry, about 15-20 minutes.

4. Turn the heat back up to medium-high and slowly stir in the veggie stock.  Bring to a boil, then lower the heat and bring to a barely bubbling simmer.  Cook, stirring occasionally, for an hour or so until the sauce is thick and smooth.  Taste for seasoning, adding salt, pepper, and brown sugar as needed.  Remove the cinnamon stick and bay leaves and keep the sauce warm.

5. Preheat the oven 350.  Spoon a thin layer of the mole into an 8×8 or 11×4 inch pan.  Place the corn tortillas, about 4 at a time, between two damp paper towels in the microwave.  Microwave for 30 seconds.  Alternatively, you can fry them until softened and pliable, about 10 seconds each.

6. Spread approximately 2 tbsp of the butternut squash mash into the center of each tortilla, roll tightly, and put them in the baking dish, seam side down.  Repeat with all of the tortillas.  Cover with another layer of red mole sauce.  Bake for 25 minutes.  Sprinkle with queso fresco and cilantro.  Serve with extra mole sauce.

Thank you all so much for your support!  It is due to all of your votes that I made it through round 1 of Project Food Blog.  This is my entry to Project Food Blog Challenge #2!  Voting begins tomorrow so if you like what you see here at Eats Well With Others, go over and show your love!

This is also my entry to this week’s I Heart Cooking Club and to Food ‘n Flix the first movie for which was Chocolat!  I am also sending it to Meatless Mondays!

Please remember to submit your recipes for Regional Recipes: Japan by September 30th! 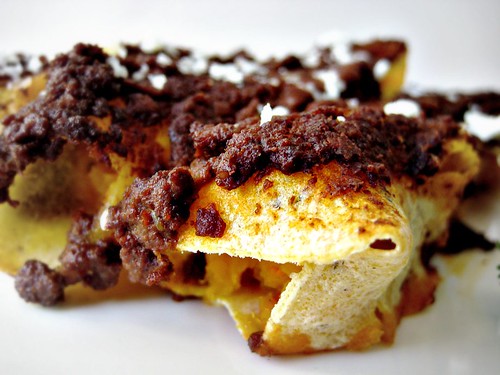