Pork Schnitzel with a Roasted Potato and Brussel Sprout "Salad" 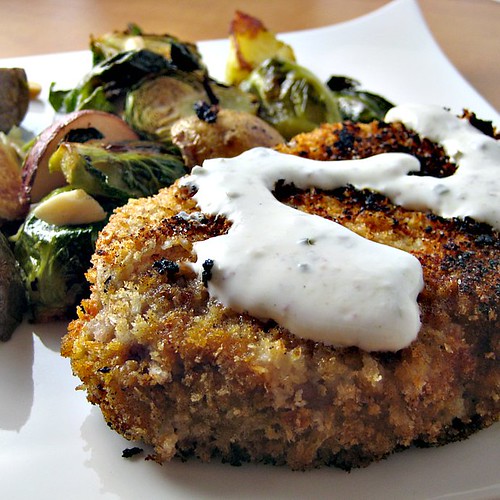 I sometimes wish that more English words took their etiology from Germanic roots.

I think life would be more fun that way.

Then we could walk around saying things like “kartoffelpuffer” (potato pancakes) or “pfefferneusse” (small spicy cookies, although the word directly translates to “pepper nut”) with reckless abandon. 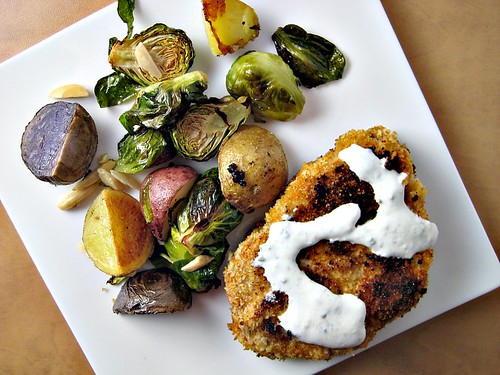 In fact, not being one to ever abide by any sort of societal norms or grammatical standards (as is evidenced by my gratuitous use of periods and incomplete sentences) and being the trendsetter that I am.  This week, I decided to take matters into my own hands and begin the arduous process of enmeshing and infiltrating the English language with some key German phrases.

For example.  When my brother complained to me about having too many job interviews.  I said, “Daniel.  Stop being such a wiener schnitzel!”

Yes, I did just call him a piece of pork that was covered in breadcrumbs and fried to all sorts of perfection.  And no, it did not actually mean anything.  But how much of language is actually about meaning and how much is about the force with which you say it?

All I’m saying is that he had no idea what I was referring to.  But it must have resonated with him because later that day I got a very solemn call from my mother asking me why I felt the need to do something as denigrating as to call my brother a “wiener schnitzel”.  And to inform me that she really wished I would clean up my vocabulary.

“No man wants to marry a girl who sounds like a truck driver” were, I believe, her exact words. 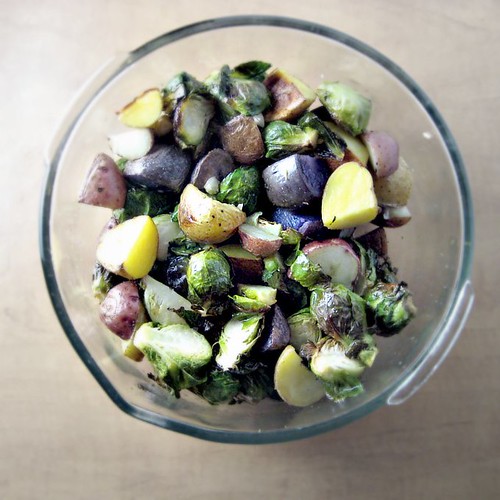 After throwing the term “wiener schnitzel” around for a few days straight, I decided that it was high time that I actually go ahead and make the damn thing.  Uncover the man behind the myth, if you will.

So I did some research and ultimately decided to use a recipe written by Elise of Simply Recipes.  Why her?  Well, with a last name like Bauer, I’m pretty sure that she knows what she’s talking about.

At first glance, this recipe looks almost identical to one for pork milanese.  And it is.  It really truly is.  Except for one thing.  The paprika.

And with it’s sweet smoky flavor.  Who can blame them?

And so while this meal is neither the most decadent nor the most gourmet.  It tastes like a simple home-cooked meal should.  To be blunt.  It is just good..

In fact, I enjoyed it so much that I have decided from here on out, the term “wiener schnitzel” is only to be used as a compliment.  Scratch everything I said before.  Grab your best friend, significant other, favorite child.  And say, “You know you’re the wiener schnitzel of my eye, right?”

And when they look at you like you’re crazy.  Make them this dish.  They’ll understand after that.  Trust me. 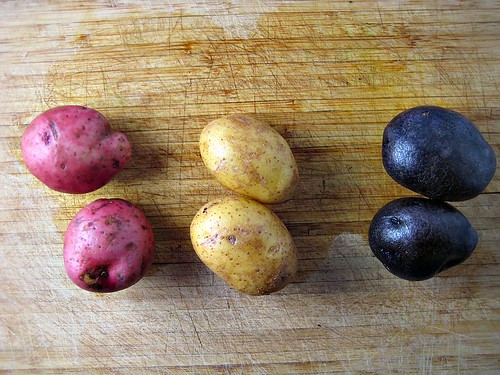 1. Use a meat hammer to pound the cutlets to 1/4-1/8 inch thickness. I am a rebel and a pacifist and so I pounded nothing.  But they will be easier to cook if you pound them.  Trust me.

2. Set out three shallow bowls.  In one, combine the flour, salt, and black pepper.  In another, combine the beaten egg and 2 tbsp milk. In the third, combine the panko and paprika.

3. Heat a skillet with the three tbsp olive oil on medium high heat.  Dredge the cutlets first in the flour, then dip in the egg/milk mixture, and then finally coat with the paprika/panko.  Place in the frying pan with the now hot oil and cook about 3-4 minutes on each side.  Remove from the skillet and cover with foil to keep warm.  Repeat until all cutlets have been cooked.

4. In a separate bowl, mix together the Greek yogurt, mustard, and chives.  Add in enough hot water until consistency desired is reached.  Mine was a little bit thicker than barbecue sauce consistency.  Add salt to taste.

Roasted Potato and Brussel Sprout “Salad”
This isn’t really a recipe but more of a simple tasty side dish that can use whatever you have on hand.  Preheat oven to 450.  Cut potatoes into chunks and brussels sprouts into halves.  I used a small bag of mixed potatoes (red, blue!, and Yukon gold) and about 1.5 lb brussels sprouts.  Toss in about 1 tbsp olive oil.  Sprinkle with salt and black pepper, place on a baking sheet, and roast for about 50 minutes or until potatoes are fork tender.  When remove from the oven, toss with 1 tbsp roasted garlic olive oil and 1/4 cup toasted almond slivers.

This is my submission to Regional Recipes: GERMANY.  You have until the end of the day on October 31st to send me your submissions! 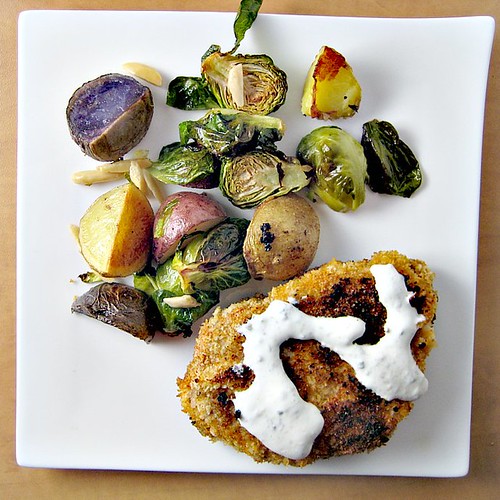