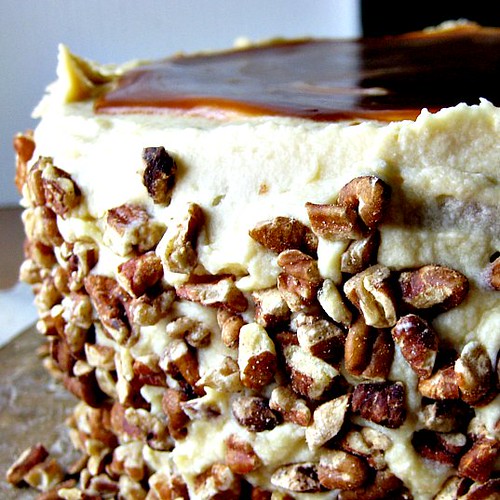 That is the word that I would use to describe the typical Eats Well With Others family Thanksgiving.  (A few others come to mind as well…but it’s the holiday season, people.  And so I’m trying to play nice.)

There are tequila shot contests.  Screaming matches.  And it’s rare that the meal goes by without someone making an explosive exit, slamming the door behind them as they go, and yelling that they’re applying for emancipation the next day because they want nothing to do with this family ever again.  Only to return again the next year to perform the same theatrics all over again. 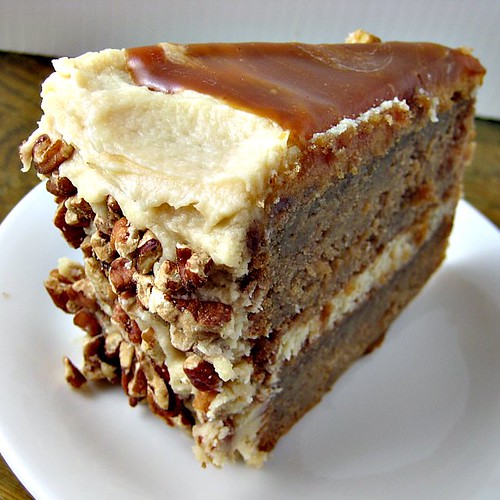 This year, however.  Was different.

My brother and cousin cut themselves off at the point of jovial drunkenness (you know, before the manic rage set in).  My father only told my uncle to “get the f*** out of his house” a mere five times instead of the usual thirty-two.  And my grandmother didn’t accuse a single person of trying to steal her money.

Truly, it was a holiday of miracles. 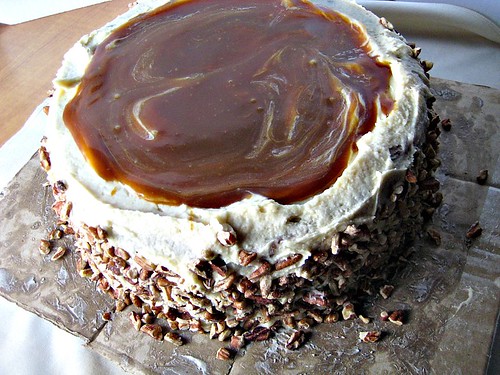 Err, one miracle to be precise.  That being, this cake.

If you follow me on twitter, you know that I spent the three weeks before Thanksgiving in a state of mental torment and indecision.  I vacillated between layer cakes, tiramisu, pies, trifles…eventually rejecting each option out of fear that they would not appeal to my family’s increasingly picky palates.  (Truly, it gets worse every year.)

And then there was this.

I knew it was the one when I ran it by my brother (remember him of “vanilla cupcake with vanilla frosting” infamy?  Such a dessert minimalist.) and he said that he approved.  I believe his exact words were “I can deal with that”.  Now, for a boy that doesn’t ever get excited about anything sweet, that was a huge step. 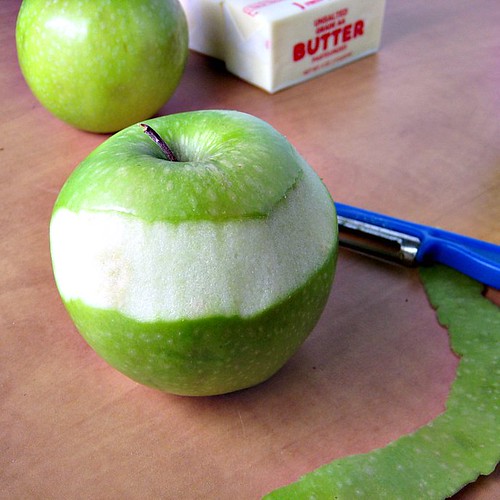 Back to my original point, which was that this cake is going to bring about world peace.  I mean, if it could silence the Eats Well With Others clan to the point that they could actually tolerate each other for a good seven hours.  There is nothing that it can’t do.

And with homemade caramel, mascarpone buttercream frosting, a dense and unbelievably moist cake core, and approximately 6 sticks of butter.  Would you really expect anything less? 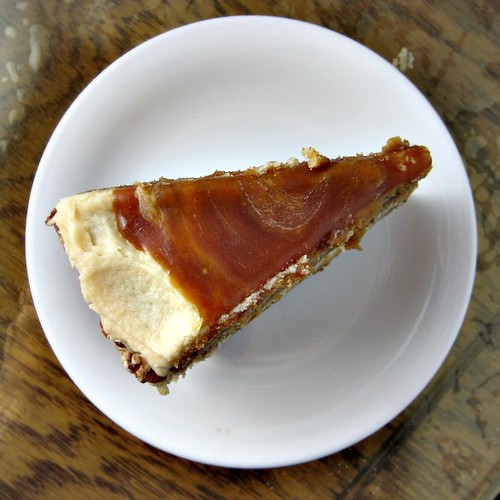 1. Melt the sugar over medium to moderately high heat in the largest post you have.  I’m serious.  Largest pot.  Whisk as you melt to make sure the sugar heats evenly.  Cook the sugar to a nice dark copper color.

2. Add the butter all at once, continuously whisking.  When it has melted and incorporated, turn off the stove and pour in the heavy cream.  The whole mixture will foam and rise up to the top of the pot so it’s a good idea to wear gloves during all this.  Whisk until you get a smooth sauce.

3. Pour it right away into a glass jar.  Use it immediately or store it in the fridge for up to two weeks.  If it gets stiff from being in the fridge, just microwave for a few seconds before using it. 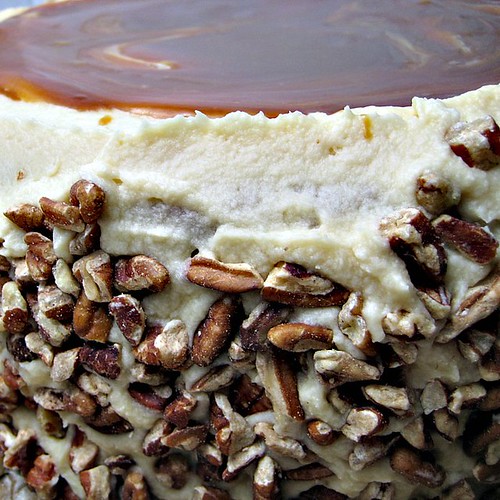 1. Preheat the oven to 350.  Grease either two or three 9-inch cake pans depending on your preference and/or the size of your cake pans.  Mine are incredibly deep so I only used two but if yours are not so deep, then you want to use three.  Line each pan with parchment paper and grease that as well.

2. Cream the butter and sugar together until light and fluffy, about three minutes.  Beat in the molasses and scrape down the sides of the bowl.  Add the eggs one at a time, only adding the next after the previous one has been thoroughly incorporated.

3. In a medium bowl, mix together the flour, baking soda, salt, cinnamon, allspice, nutmeg, and ginger.  Add the sour cream and flour mixture alternately to the batter, starting and ending with the flour (flour in 3 increments, sour cream in 2).  Stir in the shredded apples trying to leave as much juice behind as possible, vanilla, and fresh ginger.

4. Split evenly among your cake pans.  If using two cake pans, put on the same rack in the oven.  If using three, place two of the pans side by side on one rack and the third on the other rack.  Make sure they are staggered so that no pan is directly under the other.  Bake 35-40 minutes if using three or 50-55 minutes if using two, or until a toothpick inserted comes out clean.  Rearrange the layers about halfway through.

5. Remove from the oven and let cool for 10 minutes.  Carefully unmold the cakes to a cooling rack.  Let cool completely before icing.  I made these on Wednesday night and then iced on Thursday morning.

6. For the icing – cream the butter on medium-high speed for three minutes or until fluffy.  Add the powdered sugar over low speed until combined.  Then, add the cream and vanilla.  Increase speed to medium-high and beat for 3 minutes, or until fluffy.  Add the mascarpone and beat over low speed or until just incorporated.  Take one of your batches of caramel and heat just until it’s a bit liquidy but not so hot that it’s scorching.  You want it to be around room temperature.  Stir into the frosting, using large strokes to create swirls.  Place one cake layer on a cake stand or serving plate and spread icing over the top of it.  Top with the second cake and repeat.  (And then again with the third if using three layers).  Cover the cake with an even layer of frosting.  **I found this frosting to be less stiff than most so it was hard to get a super pretty frosting job.  No matter since you’re going to be covering it with pecans and caramel!  Ah, the beauty of this cake.** Pat the toasted pecans onto the sides of the cake.  Melt your second batch of caramel to just room temperature.  Pour of the the top and, using a spoon, spread it almost to the sides of your cake.  Refrigerate until ready to serve.

Given the hectic-ness of the holiday season, I am going to extend the deadline for Regional Recipes: BRAZIL to the end of December, this way everyone who wants to participate will have ample time.  Thanks to all those who have already submitted entries and to those who are for sure going to now that I’ve extended it!  Ahem.  Everyone. 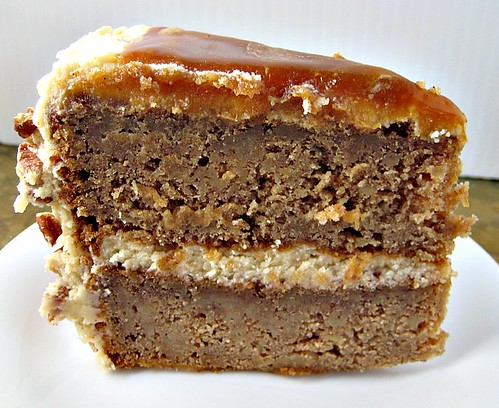