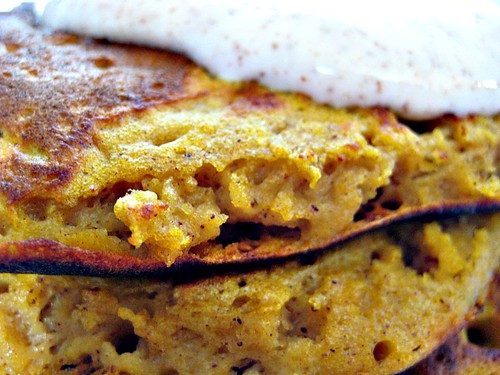 Yesterday I plunged myself into an ice bath.

It was very out of character.  I was living on the wild side.

But sometimes, after you run 13 miles.  You just can’t predict what you’re going to do next.

In my case, I filled the tub halfway with lukewarm water.  Got in, wearing nothing but a sweatshirt.  And then poured two of those huge bags of ice cubes all over myself.  This is what I like to call “icing it where it counts”.

My calves are still in serious amounts of pain.  So I’m not quite sure that it counted. 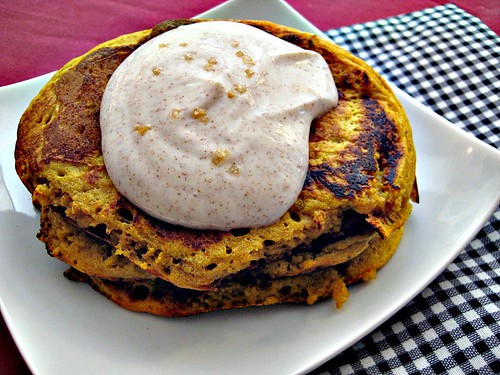 After that traumatic experience.  Endorphins still coursing through my veins in a better-than-sex kind of way.  I decided that what I really needed was a huge stack of pancakes.

But we’re not just talking any old flapjack or silver dollar.

No, no, no.  I wanted pancakes stuffed with soul. 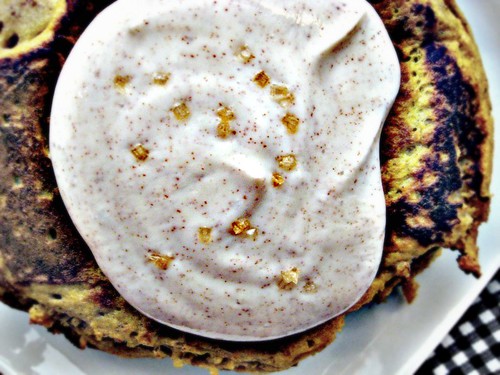 Cinnamon.  Nutmeg.  Ginger.  The spices that evoke fireplaces, Christmas morning, Thanksgiving dinner, that dream you had where you got locked in a supermarket that was filled entirely with every variety of winter squash in existence and then when the owner found you, he felt so bad that he offered to lug the lot of them over to your apartment in a UHaul.  Sigh.  If only.

And yes, these pancakes.  Bring. It. All.

Especially when topped with maple cinnamon greek yogurt.  And sprinkled with ginger salt.

They’re the cherry on top of that tub full of ice water you just sat in.   I swear it. 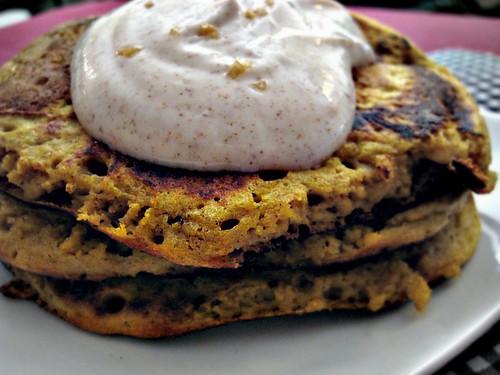 **This recipe along with the photos are my entry into MarxFoods’s Photography Challenge: Fine Salts.  I received five samples of finishing salts – Flor de Sal, Hawaiian Red Salt, Hawaiian Pink Salt, Ginger Salt, and Espresso Salt.  Per the contest’s guidelines, I am to submit two photos – one photo must feature at least one of the salts on its own, without food (notice my extremely artistic collage below.  You know you want that hanging on your wall) and the second photo must be of a recipe that uses the salt.  I chose to make pumpkin pancakes topped with a maple syrup Greek yogurt topping (think whipped cream but healthier), with a bit of ginger salt sprinkled on top to compliment the pumpkin pie spice flavors as well as to cut the sweetness of the topping. Delicious, it was.  Although I received these salts for free, I received no monetary compensation for them and my opinions about them are all my own.

In a medium bowl, whisk together the flour, brown sugar, baking powder, pumpkin pie spice and salt.  In a second bowl, whisk together the almond milk, pumpkin, egg yolks, melted butter, and vanilla.  Mix the liquids into the dry ingredients, whisking just until smooth.  In a third bowl (or you can clean and dry the second bowl and use that), beat the egg whites with a mixer until soft peaks form.  Fold the egg whites into the batter in 2 additions.  Preheat a large nonstick skillet, spraying it with cooking spray or brushing it with vegetable oil.  Pour the batter onto the pan in about 1/3 cup increments.  Flip the pancakes when bubbles start to form, cooking about 1 1/2 minutes per side.

Mix the maple syrup and cinnamon into the greek yogurt.  Pile three pancakes up on each person’s plate.  Top with a dollop of Greek yogurt mix and a sprinkle of ginger salt.

As these would be perfect for a Thanksgiving breakfast, I am submitting these to Nutmeg Nanny and Edible Mosaic’s All Through The Year Cheer: Thanksgiving event!  I am also sending these over to Chaya’s Meatless Mondays.  Because I’m the kind of girl who eats breakfast for dinner.  Good stuff.

Remember to submit your entry for Regional Recipes: BRAZIL by December 1st! 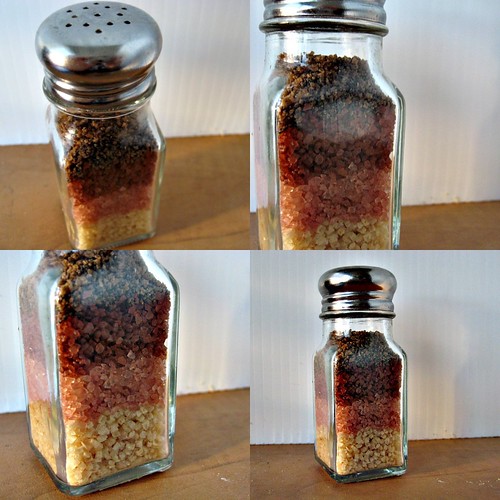