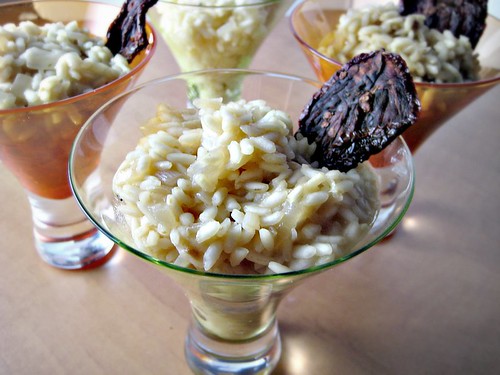 When Sophie walked into the kitchen on Sunday morning to find me at the stove cooking four pans of risotto simultaneously she did not realize that she had implicated herself in a very serious, life-altering double blinded randomized control trial.  In fact, I’m pretty sure she didn’t even bat an eye.

Although she did look at me suspiciously when I handed her a waiver to sign.  And asked her to put her hand over her heart and swear on an uncharacteristically cute butternut squash that she was not actually a spy working for a competing risotto rice reviewer and that she would answer all of my questions as truthfully as possible.  To the best of her abilities.  So help her god.

Hey, if you’re going to do a double-blinded randomized control trial in the safety of your own kitchen.  You have to do it right.  No reason why it shouldn’t comply with FDA standards.  That is my motto. 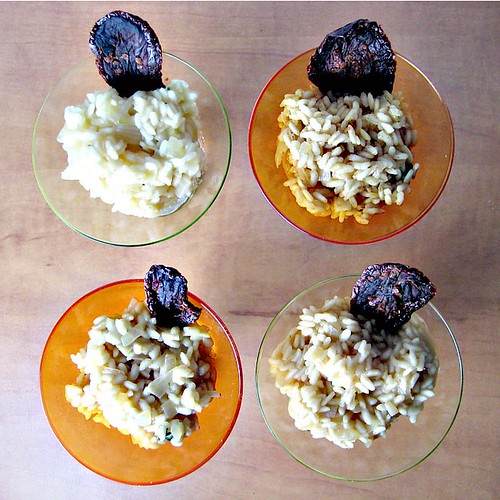 At least, such is what I thought when I agreed to do a comprehensive review of four different kinds of risotto rice for MarxFoods.  Not only was it an opportunity eat massive amounts of risotto all in the name of good honest research.  But it would also help me to hone my clinical trial skillz.  (And give me the authority to walk into any Michelin starred restaurant and proffer my opinion on exactly which rice the James Beard award-winning chef should have used.  Not gonna lie.  That was totally an incentive.) 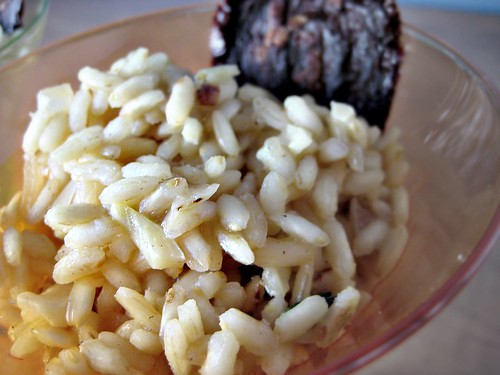 The first step in any good clinical trial is to define your primary endpoint.  In this case, what parameters was I going to use to decide what makes a given risotto rice “good”.  Was I going for texture, flavor, color, mouth-feel?

It’s very important to do this before  the trial is performed and also very important not to change it later on when you realize that, actually, the pharmaceutical you are testing does not do anything to cure lung cancer but it did somehow clear up your patients’ male pattern baldness.  No, you may not change this into a hair growth study.  You are stuck with curing cancer.  Deal with it.

Alright.  So.  Risotto for me is all about the texture.  Creamy, starchy, almost melt-in-your-mouth rice kernels that seem to have disintegrated almost into one entity but also still maintain their own integrity as individuals.  It’s a fine balance, to be sure, but one that any good risotto rice has to hold up to.  Flavor is important, of course, but decidedly not what I wanted to test in this study.  Moving on. 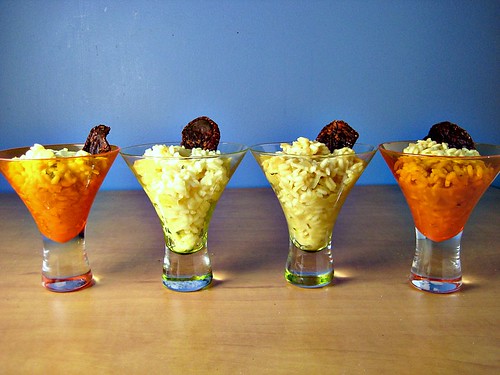 Experimental design.  When doing a double blinded randomized control trial, you need the proper controls and variables.  In this case, the variable or changing parameter was going to be the risotto rice that was used – one of either arborio, carnaroli, vialone nano, or integrale.  The controlled or unchanging parameter was going to be flavor.  I couldn’t have any of my testers being skewed by liking or disliking a given flavor.  Thus, I prepared each and every risotto the exact same way.  Within the limits of human error, of course.  Nobody’s perfect.  Not even an up-and-coming physician scientist such as myself.

Alright so here is how it went down.  Four risotto rices.  Four batches of risotto.  All plated in an identical manner (except for the color of the cocktail glasses.  It would be much more preferable to use glasses that are all the same color.  But sometimes you just have to make do with what you’ve got.  Just don’t tell the FDA.) such that neither Sophie nor Anu had any idea which was which.

(And yes, if this were truly double blinded, I would not have known either.  But let’s be real.  My short term memory is not what it used to be.  So I don’t think it’s really an issue.)

They came.  They ate.  They rated. 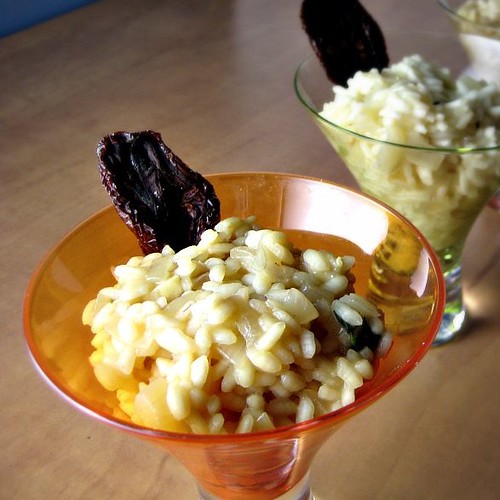 And thus, it is with no further ado that I present to you.  The consensus.

We all unanimously declared the vialone nano rice to be our favorite.  This rice has extremely small grains and give off starch almost immediately upon being doused with broth, making for an extremely creamy and glutinous risotto.  Just the way I like it.

Next up was the classic arborio.  Arborio is just so easy to work with and is pretty no-fail when it comes to risotto-making.  It gives off just the perfect amount of starch, in my opinion, to make a risotto that really holds itself together.  Not as much starch as the vialone nano, but a good amount.

Although carnaroli rice is purported to absorb more flavor and release more starch than arborio, we did not find this to be the case.  Hence why it was less of a favorite.  While it did hold flavor very well, the risotto never reached that creamy consistency that we desired and expected from a good risotto.

Last and, unfortunately, least came the integrale brown rice.  I wanted this to win. I really and truly did, ever the whole grain fanatic that I am.  And while this most certainly retained the most of the flavor out of all the rices, it gave off the least starch and so I felt like I was eating rice soup while eating it.  Which is fine.  If you want to be eating rice soup.  But usually, when I’m in the mood for risotto…that’s the last thing that I want.

So there you have it.  My first double blinded randomized control trial.  A veritable success.  Next up, trying to figure out a way to apply this in the clinical setting.  Can eating massive amounts of risotto prevent cancer?  A prospective cohort study in the making.  Stay tuned. 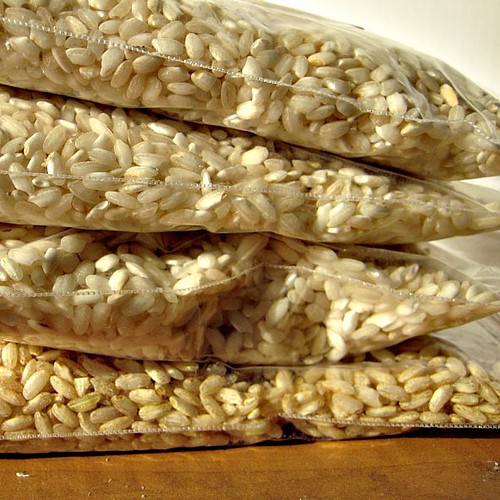 1. Heat the broth in a medium to large pot on the stove, allowing it to stay at a simmer.

2. In a large non-stick skillet, heat the olive oil.  Add the diced onion and saute over medium heat until translucent, about 5 minutes.  Add in the garlic and cook for 30 seconds.  Add in the risotto rice and cook for 2 minutes, constantly stirring.

3. Add the simmering broth to the rice in half cup-ish increments, only more after the last addition has almost completely evaporated, continuously stirring the entire time.  After you add the first batch of broth, add the leaves off of four thyme sprigs to the pan.  Cook the rice in this way until tender, about 25 to 30 minutes.  Remove from heat and mix in the parmesan cheese.  Add salt and pepper to taste.  Serve in bowls or in cocktail glasses (what, I have to use them for something!).  Garnish with sun-dried tomatoes.

I am submitting this to the Hearth and Soul Bloghop!

**Disclaimer – Although I was given these rice samples from Marxfoods for free, I received no other compensation for doing this review and my ideas, thoughts, and opinions on the products are all my own. 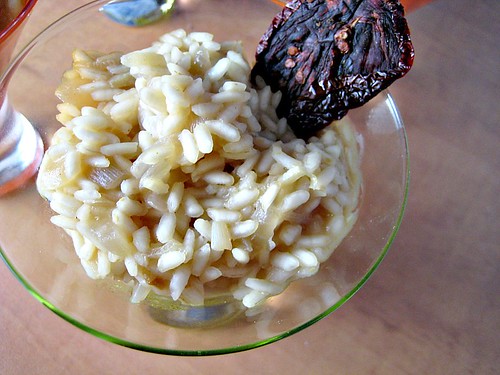