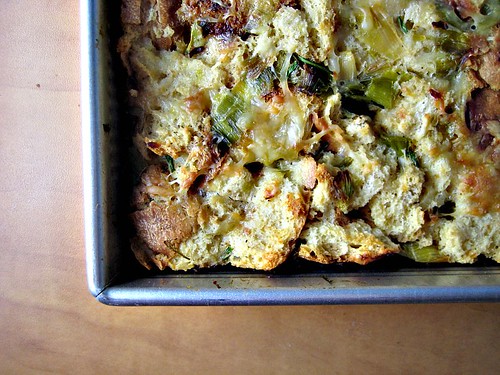 Before you dive into this post, please go over and vote for my Grasshopper/Creme de Menthe Bars over at My Baking Addiction/Good Life Eats! I would really appreciate it!

It was every man, woman, and Santa for himself yesterday morning as I weaved my way through the depths of Chinatown, trying desperately to get over to the FDR Drive so that I could finish out my 11 mile long run/walk/run-walk in some semblance of a rational amount of time.

My run-walking buddies and I had already been through many an ordeal at this point.  We had throttled tourists on the Brooklyn Bridge.  Pointed a few choice fingers at a number of bikers who, in true biker fashion, attempted to run us off the road in an ugly manifestation of what can only be described as compensation for the fact that they aren’t/haven’t been/will not get any for an indeterminate and excruciatingly long amount of time.  (Bikers.  I’m sorry.  I don’t make the rules, I just live by them.  Don’t hate the player, hate the game.)  Informed our bladders that we were deeply sorry.  They were just going to have to wait until we got back to the starting point.  (Okay, maybe I was the only one talking to my bladder.  Carol had the common sense to eat some salt before we left.  So she was retaining water in a truly efficient manner.) 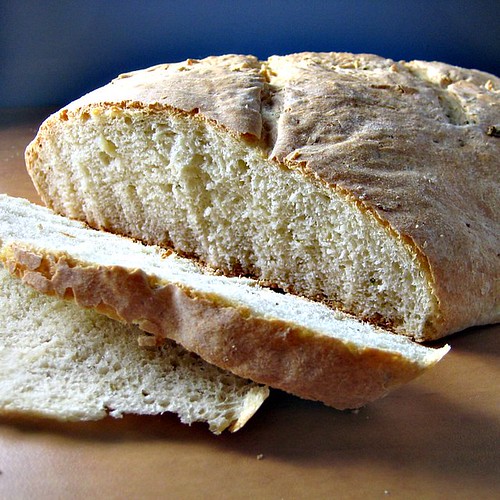 And then.  Just minutes after we stepped off the Williamsburg bridge, thinking that we were really and truly in the home stretch with only a mere 2-3 miles left to go.  We looked up and found ourselves in a sea of red.

One of New York’s largest and most conspicuous bar crawls, SantaCon is this city-wide event where masses upon masses of people dress up in Christmas/holiday-related (mostly Santa) costumes and travel in a large throng from bar to bar starting crazy early in the morning and ending crazy late at night.  I went with my roommate at around 10PM to the bar that she had left her credit card at the night before.  And they were still out.  Ready.  Raring to go.  After over fifteen hours of drunkenness. 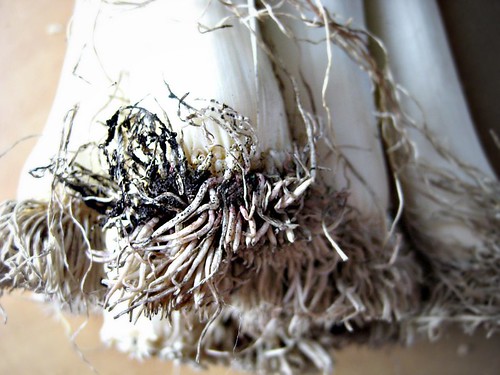 And for the record.  Watching Santa dry hump a scantily clad elf in the middle of a bar on the upper east side of Manhattan is just as disturbing at age 23 as I would imagine it to be at age 5.  Even more so, perhaps.

Which is why my future children and I are going to spend our future SantaCons in a bomb shelter.  Biding our time.  Waiting until the danger passes.

My eyes can’t handle going through this again. 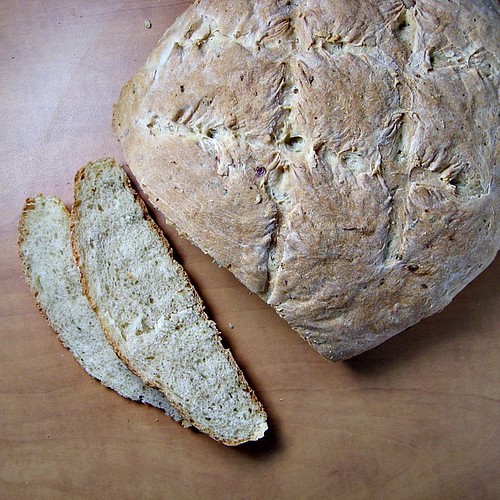 And when that happens, I’ll be sure to have a pan full of this bread pudding raring to go.  So dense and carbalicious that it is truly the perfect thing to sustain you in the wake of a national disaster (such as SantaCon).  Or to fuel you before a long run.

Or, now that it’s all good and healthy, to eat on a lazy Sunday without any guilt at all whatsoever.  That sounds like a pretty good deal to me. 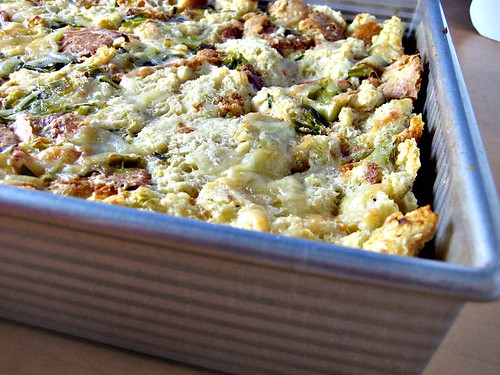 One of my darling and lovely readers, Elizabeth of Crossword City, sent me an email a few weeks ago asking me if I could healthify Thomas Keller’s absolutely luscious leek bread pudding for her.  I took one look at the recipe, saw just how much bread it called for, took a cold shower (necessary), and replied with a loud and resounding ABSOLUTELY.

So I set to it.  After some rumination and because I am just crazy enough to bake a loaf of bread for the sole purpose of tearing it up to put in bread pudding, I decided to make a potato chive bread to go in the pudding. You’ve all heard of potato leek soup, right?  (I mean, really. It’s a classic. If you haven’t, then please crawl out from under your rock and do a google search.)  I thought this would be an interesting play on that.  Potato leek soup DECONSTRUCTED.  If you will.

A loaf of bread and a few healthy substitutions later.  And you are left with a decadent bread pudding that you will not even feel guilty about serving to your holiday guests.  Most of whom (given the current state of America) are probably on the verge of having a myocardial infarction with each bite they take.  How’s that for holiday spirit, good will towards men.  And all that jazz.

Potato and Chive Bread
Makes 1 big loaf or 2 small loaves, adapted from Living in the Kitchen with Puppies

1. In a large bowl, combine the yeast and 1/4 cup water.  Add the sugar, stirring to dissolve.  Let the mix stand for 10 minutes or until foamy.  Stir in the remaining 3/4 cups water, the vegetable oil, and the salt.  Stir in the potato, followed by the almond milk.  Add about half the flour, stirring to combine, then work in the remaining flour to form a stiff dough.  I needed to add more flour than this because my dough was EXTREMELY sticky.  Transfer to a lightly floured board.

2. With lightly floured hands, knead the dough until it is smooth and elastic, 8 to 10 minutes. Place in a large, lightly oiled bowl and turn so that it becomes covered in oil.  Cover with a damp kitchen towel.  Let rise in a warm place until doubled, 1-2 hours.

3. Punch the dough down and knead lightly for a few minutes.  Turn out onto a lightly floured work surface.  Sprinkle with the chives and knead until the dough is elastic and the chives are evenly distributed, 3 to 5 minutes.  Place dough onto a Silpat or onto a lightly oiled baking sheet.  Flatten slightly and cover with a clean damp cloth.  Set aside in a warm place and let rise again until doubled, about 45 minutes.

4. Preheat the oven to 400.  Use a sharp knife to cut an X on the top of the loaf.  Bake on the center oven rack until golden brown – 35-45 minutes.  Tap on the bottom of the loaf (or percuss, as we say in the medical field) – if it sounds hollow, it’s done.  And it also isn’t suffering from hepatosplenomegaly.  Nice.  Remove from the sheet and let cool slightly on a wire rack before slicing.

Savory Leek Bread Pudding
Serves 8 as a main dish, 16 as a side, adapted from “Ad Hoc At Home”

1. Place a medium saute pan over medium-high heat.  Drain excess water from leeks and add to pan.  Season with salt and saute until leeks begin to soften, about five minutes.  Reduce heat to medium low. Stir in butter.  Cover and cook, stirring occasionally, until leeks are very soft, about 30 minutes.  Adjust salt and pepper to taste.

2. Preheat oven to 350.  While leeks are cooking, spread bread cubes on a baking sheet and bake until dry and pale gold, about 20-30 minutes, turning pan about halfway through.  Transfer to a LARGE bowl, leaving the oven on.

3. Add leeks, chives, and thyme to the bowl with the bread and mix well.  In another large bowl, lightly whisk the eggs, milk, salt and pepper to taste, and a pinch of nutmeg.

5. Add remaining milk mixture, letting some bread cubes protrude.  Sprinkle with salt and remaining cheese.  Bake until pudding is set and top is brown and bubbling, about 1 1/2 hours.  Serve hot.

This has been yeastspotted!  And it is also being submitted to Chaya‘s Meatless Mondays!  This has been linked to the 12 Days of Bloggie-Mas hosted at A Moderate Life! 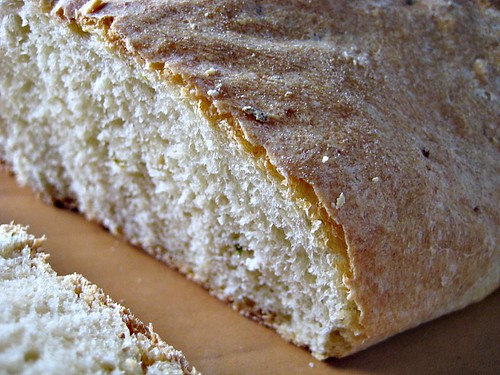