Roasted Leg of Lamb with Tzatziki and Pomegranate Tabbouleh Lentils and Shells with Cilantro-Scented Onions and Swiss Chard…Eat.Live.Be. for a Better 2011! 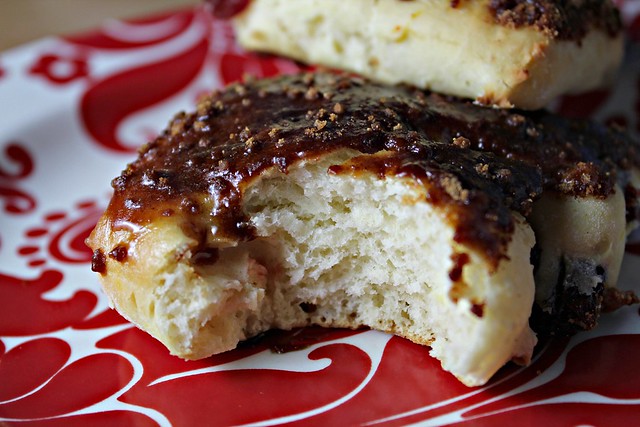 Well, if you really want to know.

These are what I did yesterday afternoon while my roommates were studying for our rheumatology test today.  Occasionally, I would pop my head into Sophie’s room and offer my opinion on such various topics as “what the difference is between a polyarticular and an oligoarticular arthritis” or “why steroids are contraindicated in glomerulonephritis”.

Mostly, though, I spent my time covered in flour with dough all over my hands and feet and notes, which were sitting dutifully on the kitchen table so that I could at least give the impression that I was trying to learn how to tell one vasculitis from another. 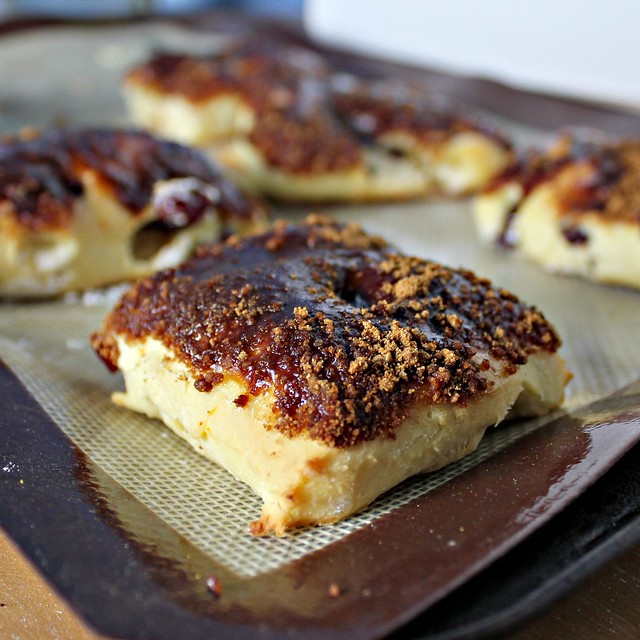 Beignets were not my intention at all for this week, which is why they are a few days late and a dollar short when it comes to Mardi Gras.  For the third round of the MarxFoods competition, we had to remake another participants recipe using three of the ingredients that we hadn’t used in round two.  I was very crafty when planning all this and since I knew I’d be better at remaking a sweet rather than a savory recipe, I saved all of my sweet ingredients for this occasion.

Somewhere along the way, I got it into my head that I wanted to remake Brian’s scones.  I had this whole idea that I would make scone shortcakes with a saffron whipped cream and a dried cherry sauce and then I would gather my roommates together around our kitchen table for tea and we would all sit around like ladies while wearing long flowy skirts and gossip about every person we know until we were blue in the face. 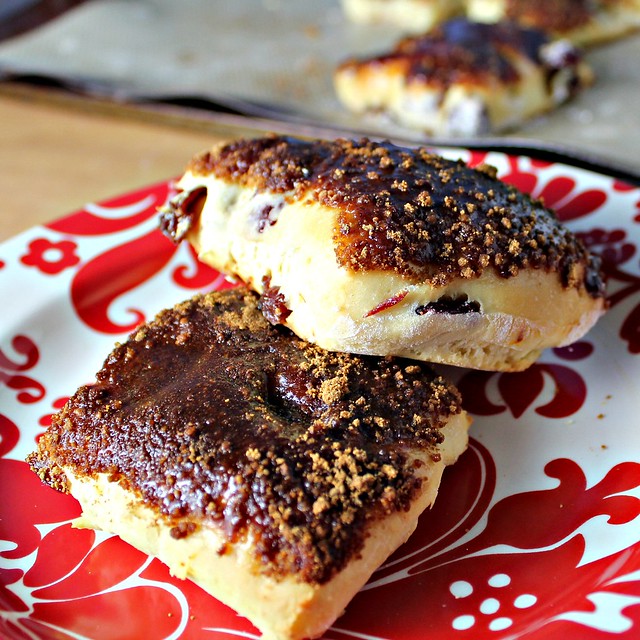 Then I read Jenna’s blog.  And as soon as she mentioned that she had recently become so addicted to watching Grey’s Anatomy that she had finished the entire second season in a week.

I then got it into my head that were soulmates.

And then after that she posted a recipe for oven baked beignets.   That sealed the deal.

Someday she’ll read this and run away screaming because she’ll think I’m a stalker.  But I’m not, I swear.  We just have a mutual love of Patrick Dempsey and NOLA-inspired pastries.  No biggie. 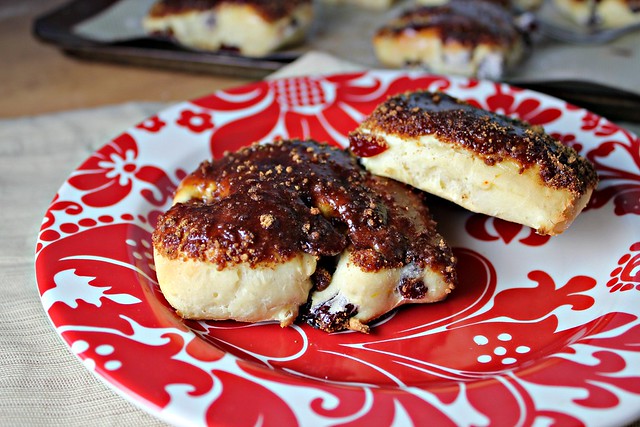 Now it is many hours later, my other roommate Anu is walking around our apartment with a half eaten beignet in her hand, in some kind of sugar-induced stupor, just repeating to herself over and over, “Oh my god”.  And the twelve beignets that were sitting on my table as of 5pm yesterday have now dwindled down to two and a half.  So while Mardi Gras is over for this year, I like to think that it’s really never too late for beignets.  Gotta keep that spirit alive and kicking somehow.

I also just want to say a belated happy birthday to my little sister!  She turned 15 yesterday.  Which means that tonight I will be baking a triple layer cake just for her that is decorated to look like cookie monster.  And pulling 12 pounds of pork.  None of which I will be eating because for some reason the thought of eating meat right now is making me feel really sick.  And no. I’m definitely not pregnant.  Weird.

Also, as part of this round of the MarxFoods competition, we had to specify a second recipe that we would try in the future.  I would go with Shannon’s Blueberry Cherry Crisp with Grains of Paradise ice cream.  Crisps make me think of spring and spring makes me happy.  Nuff said. 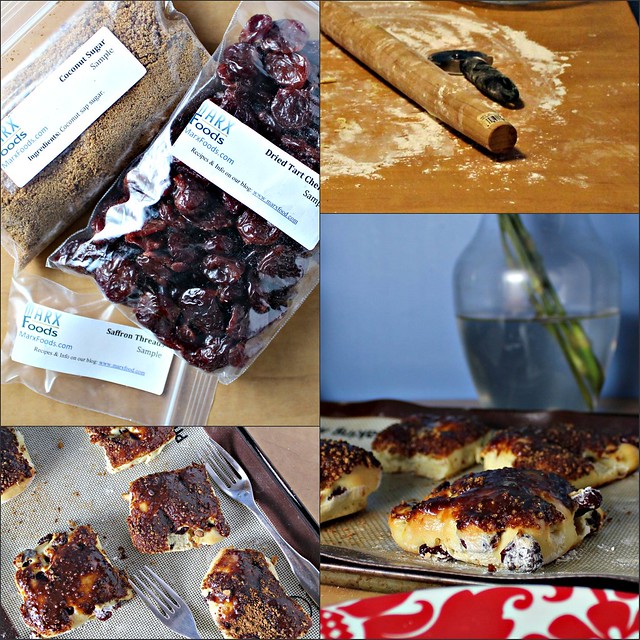 1. Combine the yeast, warm water, and a pinch of sugar in a small bowl and stir until yeast is dissolved.  Let sit for five minutes or until yeast proofs/becomes foamy.

2. Meanwhile, in a separate bowl, combine flour, baking powder, baking soda, salt, sugar, and saffron.  Using your fingers, cut in the butter and work mixture together until it resembles coarse sand.

3. Mix together the egg and buttermilk.  Mix into the yeast.  Add to dry ingredients.  Mix in the dried cherries.  Stir together to form a soft dough and then continue to knead until the dough becomes smooth and elastic. In your stand mixer, this should take 6-8 minutes.

4. Spray a bowl with cooking spray and dump your ball of dough into it.  Cover with a damp cloth and let rest for 15 minutes.  On a well-floured surface, roll out the dough to the shape of a large square.  Cut square into five strips and then cut those strips into squares.  Place squares on a lined baking sheet.  Spray with cooking spray and cover with a damp cloth or plastic wrap.  Let rise for 45 minutes.

5. Preheat oven to 400.  Bake beignets for 10-12 minutes or until lightly golden.  In a small bowl, mix together the cinnamon and coconut sugar (or regular sugar if you don’t have coconut!).  Pour the melted butter into a flat yet lightly rounded bowl.  When the beignets are cool enough to touch but still warm, dip the top of them into the butter and then dredge in the coconut sugar/cinnamon mix.  Serve warm. 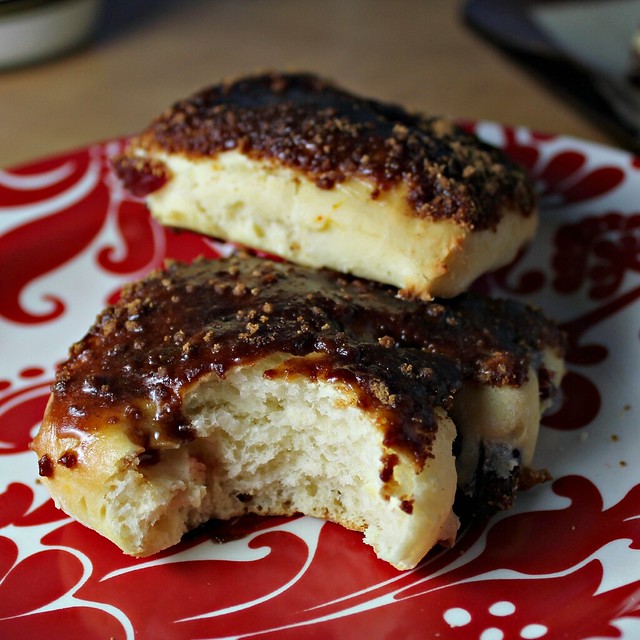