Pork and Black-Eyed Pea Chili Macaroni and Goat Cheese with Roasted Red Peppers…Eat.Live.Be. for a Better 2011 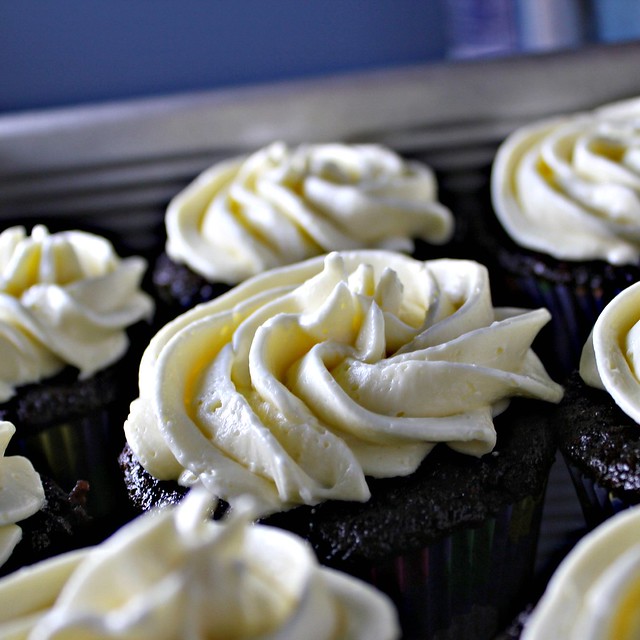 Look, if anyone asks, I am a goddess in the kitchen.

Everything always turns out beautifully.

And sure, I may lick my share of spatulas.  And stick my fingers into just about everything I create.  And double dip.  But who doesn’t?

(And never have I ever given anyone Salmonella.  Which, for those of you who care is a gram negative, lactose negative bacteria that causes gastroenteritis, turns black on a test for hydrogen sulfide, and causes more of an inflammatory type of diarrhea than osmotic or malabsorptive or secretory.  Yes.  I said it.  Diarrhea.  We are in the middle of the GI module.  If I have to hear about diarrhea at 8AM every day then so do you.  Amen.) 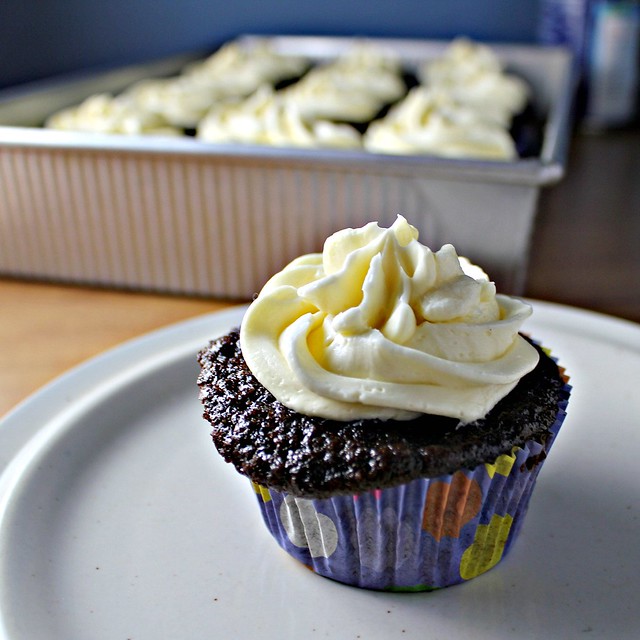 Take these mint chocolate cupcakes, for instance.  Maybe I was distracted or in a rush or got it into my head that I was actually in lecture and thus was not paying attention at all whatsoever. Who knows.

But I was speeding along, mixing up batter as quickly as possible.  (And with mint chocolate cupcakes lurking in your future, what are you doing hemming and hawing?  Get to it, people!)  And when I got to the end of the mixing, I thought.  Hmmm.  That’s weird.  This is a really thick batter.  But because I am stubborn and occasionally think I can never make mistakes ever and certainly never forget entire ingredients, I didn’t bother to recheck the recipe. I just forged ahead.

And what happened was.  That I pulled out my cupcake tins.  And instead of having a moist light and fluffy batch of chocolate cupcakes. I was presented with a cupcake disaster in the form of dense, dry really bad brownie-esque cupcakes.  All because I forgot 3/4 cup warm water.

Thankfully, these are actually super easy to whip up.  There is no butter to soften.  Only three tbsp of vegetable oil to measure.  And so another batch went into the oven within about 10 minutes.  This time, with that 3/4 cup of water included. 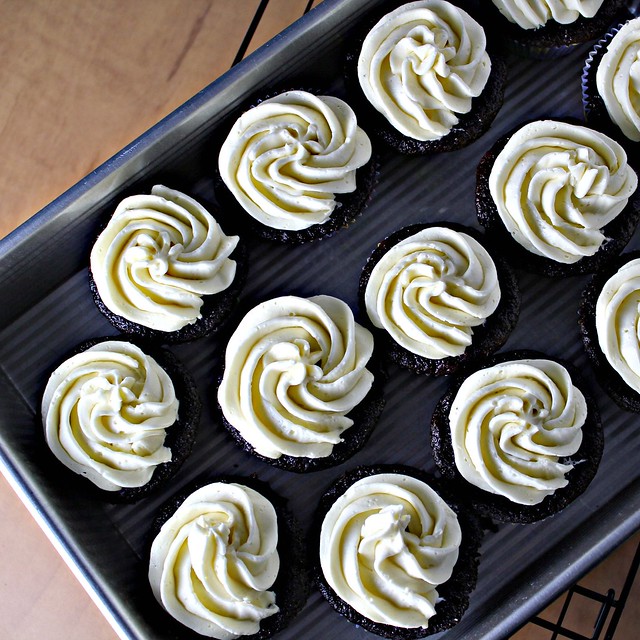 So what my point is that while these cupcakes are obviously not indelible.  Nor will they hold up to any major baking errors.  They are worth any potential blows to your ego that may or may not ensue should you omit key ingredients and then expect everything to turn out for the best.  When made right, they are deliciously moist and light and fluffy.  Chocolate with a hit of mint.

And topped with a swiss meringue buttercream that, especially after the cupcake baking fiasco, will have you growing gray hairs like there’s no tomorrow as you worry at each and every step that your eggs are curdling and that nothing will come together and that it might actually be too buttery, as if that’s even a possibility.

Everything will be okay.

You will end up with something slightly sweet and minty (after all, it has been infused with the flavor from actual mint leaves and not just that overpriced extract that you purchased this holiday season) and absolutely ideal for those of us with a slight mint chocolate obsession.

It took all the strength that I could muster to only eat one.  But that one.  Was kind of like heaven.  Even to this fallen baking goddess. 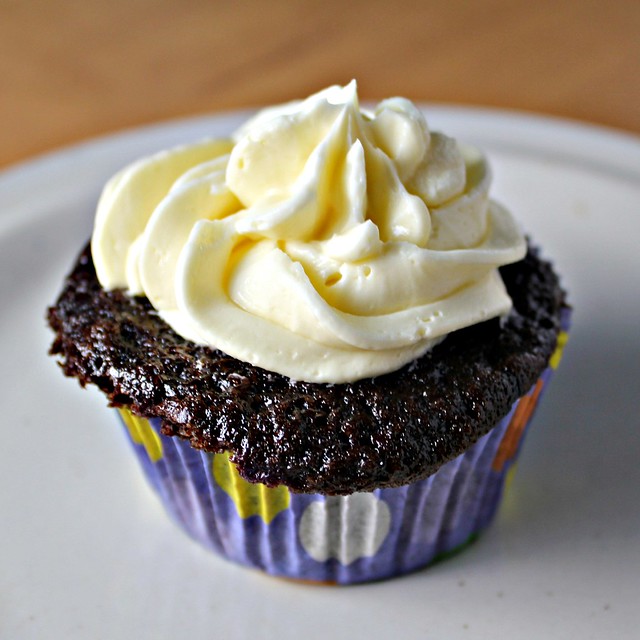 1. Preheat oven to 350.  Line standard muffin tins with paper liners.  With an electric mixer on medium speed, whisk together the flour, cocoa, sugar, baking soda, baking powder and salt.  Add eggs, buttermilk, oil, extract and the water.  Beat on low speed until smooth and combined, scraping down teh sides of the bowl as needed.

2. Divide the batter evenly among lined cups, filling each about two thirds full.  Bake, rotating tins halfway through, until a cake tester inserted in the centers comes out clean, about 20 minutes.  Transfer tins to wire racks to cool 10 minutes.  Turn out cupcakes onto racks to cool completely.  Cupcakes may be stored overnight at RT or frozen up to 2 months in airtight containers.

3. To finish, fill a pastry bag fitted with a large plain tip with buttercream and pipe onto cupcakes.  Once frosted, cupcakes can be stored up to 1 day at RT or 3 days in the fridge.  Bring to room temperature before serving.

1. In the bowl of a standing electric mixer fitted with the whisk attachment, mix egg yolks and 1/4 cup sugar on high speed until pale and thick, 2 to 3 minutes.

2. Prepare an ice water bath.  Bring milk, vanilla, and mint leaves just to a boil in a medium saucepan.  Remove from heat.  Whisk about one third of milk mixture into yolk mixture to temper.  Pour yolk mixture into pan with remaining milk mixture and whisk to combine.  Clip candy thermometer to side of pan.  Cook over medium heat, stirring constantly, until mixture registers 185 F.  Remove from heat.  Strain through a fine sieve into a heatproof bowl (discard solids).  Set bowl in ice bath, stirring and mixing until cool.

3. In another bowl of an electric mixer fitted with paddle attachment, cream butter on medium-high speed until pale and fluffy.  Beat in chilled egg-yolk mixture.

4. Heat egg whites and remaining 1/4 cup sugar in the clean heatproof bowl of an electric mixer set over a pan of simmering water, whisking constantly by hand until mixture is warm to the touch and the sugar has dissolved.  Attach bowl to teh mixer fitted with the clean whisk attachment.  Starting on low speed and gradually increasing to medium-high speed, whisk until stiff peaks form and mixture is completely cool, about 10 minutes.  NOTE – the peaks were not stiff in the usual meringue sense but were a bit thicker and wetter because of the sugar.  Do not be alarmed.

5. Add egg-white mixture to butter mixture.  Switch to the paddle attachment and beat on medium-high speed until smooth.  Beat in peppermint extract. Keep buttercream at RT if using the same day or transfer to an airtight container and refrigerate up to 3 days or freeze up to 3 months.  Before using, bring to RT and beat with the paddle attachment on low speed until smooth again, about 5 minutes.

This is my submission to Weekend Herb Blogging, which is being hosted by Astrid of Paulchen’s Foodblog. 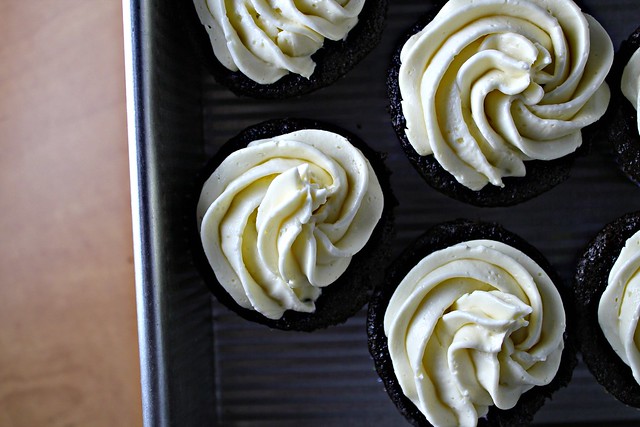